10 Common Interview Mistakes – and How to Avoid Them

Congrats! After impressing the hiring manager with your resume and formidable skill set, you’ve landed the job interview.

That was the easy part.

Job interviews can be nerve-wracking and there’s a variety of common mistakes candidates can make, from wearing the wrong attire to not following up post-interview.

We’ve compiled the 10 most common job interview mistakes for you – and advice for how to avoid them.

Every job interview is about making a great impression on the hiring managers, and hopefully one that shows reliability and professionalism. Showing up late is one way to demonstrate the exact opposite.

Arriving late to an interview will make the manager think you either don’t take the position seriously, you’re bad with deadlines, or you’re simply unorganized.

Plus, you’d be disrupting a manager’s busy schedule. 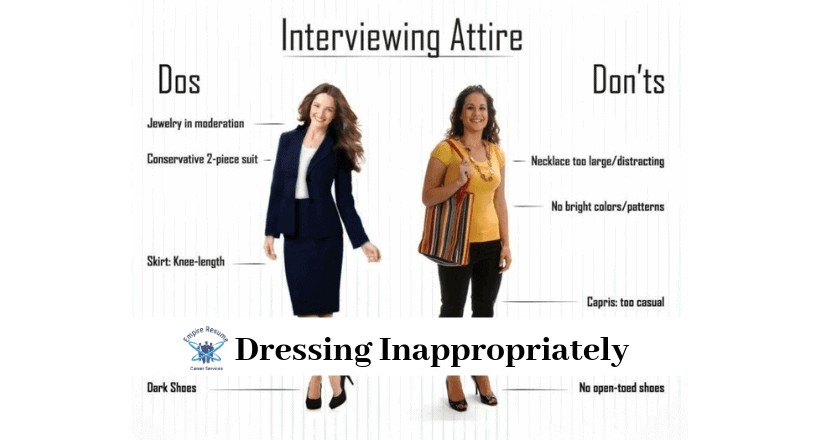 Sure, your resume is great. Your portfolio is top-notch, too, and you’re 15 minutes early for the interview. All of that may be negated, though, if what you’re wearing doesn’t send the right signals.

A common mistake to avoid is to dress too casually for an interview.  Career experts suggest researching what the company’s culture and dress code is like, and then dressing one step above that.

3. Forgetting to Bring Your Resume

Bringing hard copies of your resume shows you’re prepared and professional. Plus, while the manager may have a good idea of what your experience is, it’s always best to put the details right in front of him or her.

4. Not Researching the Company

Hiring managers want to know that you’re truly interested in their company and the open position. Coming into the interview without doing thorough research of the company is one mistake that gives the impression you just want any job – not necessarily one with their company.

Research the company and position as much as you can so you look knowledgeable and interested in the job. You’ll be able to ask the right questions when you’ve done your research, which will demonstrate you’ve done your homework and you’re excited for the opportunity.

5. Not Turning Off Your Phone

Avoid looking at your phone during an interview – it’s a sure-fire mistake that shows a manager you don’t take the interview seriously. It’s also a sign of disrespect to the manager’s time.

We live in an age of 24/7 connectivity, but that’s still not an excuse. Always turn your phone off during an interview, and even take the extra step of turning it off before you enter the building. Spend time reviewing and proofreading your resume and portfolio before the interview – instead of checking Instagram or surfing the internet.

Talking smack on a previous (or current) employer is one of the worst interview mistakes you can make, and one to avoid at all costs.

Even if you feel justified in making negative remarks, voicing them in an interview raises too many questions for a manager. It gives the impression you’re difficult to get along with and you don’t handle conflict well.

Be neutral in your responses about former employers who have ticked you off, keep your answers brief, and put a positive spin on it.

If you make it far enough in the interview process, you will negotiate your salary and benefits. But the initial interview is never an appropriate time to bring the topic up, unless the manager asks you directly.

Asking about salary and benefits in the initial interview is one mistake that shows you only care about money, and not the company or the job itself. You’re much better focusing on gaining the trust and respect of the interviewers and showing the value you can bring to their company.

Most every interview ends with the manager asking the candidate if they have any questions. The worst possible response is, well, you don’t have any.

Having zero questions at the end of the interview sends the signal you either don’t want the job or, worse, you’re unprepared. Avoid this by coming into the interview with a list of questions you’d like to ask.

Hiring managers are usually more impressed by candidates who ask thoughtful questions rather than the selling points candidates make about themselves.

Most hiring managers have go-to questions they ask every candidate, such as the dreaded, “Tell me about yourself,” or, “Where do you see yourself in five years?” Stumbling over common questions like these is a mistake that will raise an eyebrow or two from the interviewers.

Avoid this gaffe by researching the most commonly asked interview questions and practicing your answers. While you don’t want to sound like you’re reading from a script, it’s smart to have a general idea of how you’ll respond.

A common mistake many job candidates make is not following up after the interview. A follow-up email or phone call shows interest in the job and gratitude for the opportunity – all things that will further impress the hiring manager.

A follow-up email doesn’t need to be long but try to personalize it by mentioning something discussed in the interview. This may be the icing on the cake that can push you over the top and get you the job.

“Why Should We Hire You?” Interview Question

How to Get Ready for an Interview

How to Negotiate Your Salary