A Brief History of the United States Air Force 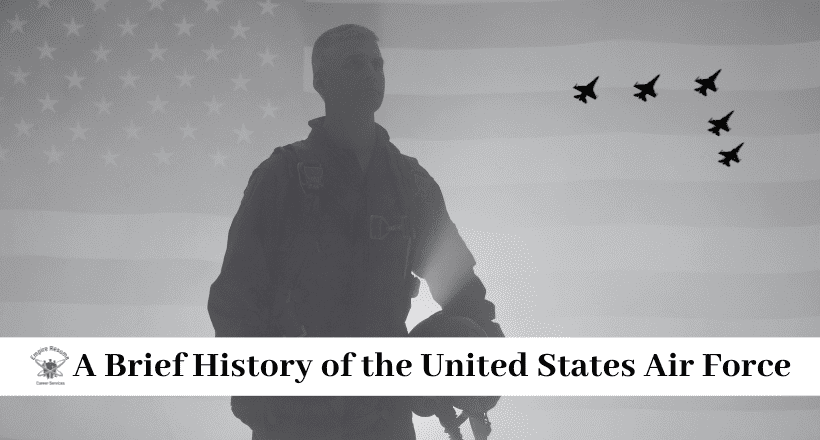 The youngest branch of the nation’s military, The United States Air Force (USAF) was created as result of the National Security Act of 1947, which was signed into law by Harry S. Truman.

Even though the USAF officially came into existence after World War II, the nation’s history of using aircraft in military operations dates as far back as 1907.

Let’s look at the humble beginnings of the USAF and how it went from being a small unit under U.S. Army command, to the elite, independent fighting force it is today.

The Early Years of the USAF

In 1907, the U.S. Army Signal Corps established the first Aeronautical Division to take “charge of all matters pertaining to military ballooning, air machines, and all kindred subjects.”

At the time, however, the Signal Corps had only 10 balloons and a small dirigible in its arsenal. In August of 1908 the Signal Corp purchased its first airplane from the famous Wright Brothers. Unfortunately, testing of the plane resulted in the death of Lt. Thomas E. Selfridge, who is noted as the first casualty of U.S. military aviation activities.

The Wright Brothers made improvements on their original design and in August of 1909 the United States Army added its first airplane, simply named “Airplane No. 1” into its arsenal.

It was just four years later in 1913 that the 1st Provisional Aero Squadron was formed. Later renamed to the 1st Aero Squadron, and then the 1st Reconnaissance Squadron (which still exists today), this marks the first time in U.S. history that a unit devoted solely to military aviation and air maneuvers existed.

During this time Congress passed a law to create an official Aviation Section of the Signal Corps. The law gave the Aviation Section the authority to operate, maintain, and oversee all military aircraft including “balloons and aeroplanes.” The Aviation Section was also charged with training servicemen and officers in all “matters pertaining to military aviation.”

The USAF in World War I 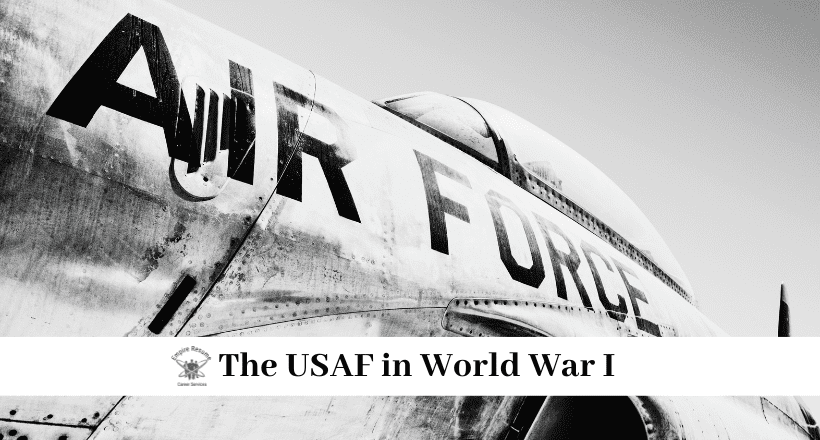 In August 1914, the first World War started in Europe, which marked the first-time airplanes were used significantly in wartime activities.

At the time, the 1st Aero Squadron represented the total air strength of the U.S. military with a mere 6 aircraft and 66 men, including 12 officers.

Approximately 18 months later, the unit grew to 23 aircraft, and 268 men, including officers. This was definitely an improvement for the unit, but still considered to be quite small in comparison to the air power of most European countries at the time.

President Woodrow Wilson quickly recognized that air strength would play a significant role in modern battles and paved the way, along with congress for the 1st Aero Squadron to continue its efforts to expand. However, these plans for expansion were interrupted when the United States officially entered the World War I on April 6, 1917.

By the time the war ended in November of 1918, the Air Service had in its possession 185 air squadrons; 86 balloon companies, 15 airplane construction units, 114 air supply units, 55 photographic sections; and additional units devoted to miscellaneous duties. There were 19,000 officers, and 178,000 enlisted men.

Once the war ended, many of the Air Service units were demobilized and the numbers of enlisted men and officers were greatly reduced. However, the President, Congress, and military leaders believed the reduced strength of the Air Service was appropriate for peacetime.

The USAF Between World Wars

The Army Reorganization Act of 1920 officially named the Air Service a combatant unit of the Army and created the new role of Assistant Secretary of War for Air. The Air Corps Act of 1926 changed the name of the Air Service to Air Corps, but altered nothing else regarding the unit’s duties.

In the 1930s, the Roosevelt Administration saw the growing importance of air strength in defense of the nation while also recognizing that the United States could enter into yet another European War.

Soon afterwards, Congress authorized $300 million be allotted to the Air Corps to build 6,000 airplanes to be used for military purposes.

The USAF in World War II

As the German army marched its way across Europe in 1939, and the possibility of the United States being dragged into another World War became more and more likely, the Air Corps were in the unique position of receiving all the funding and support from Congress they asked for.

This unprecedented support from Congress and the Roosevelt administration led to the Air Corps to grow exponentially in just 5 years.

Prior to 1939, the Army’s air unit was a fledgling organization with limited resources. By the end of World War II, the newly named Army Air Forces had become a major military power comprised of 22 million enlisted men and approximately 64,000 aircraft. In addition, the Army Air Forces had several wings, divisions, squadrons, commands, and other groups under it.

After both Germans and Japanese surrendered, thus ending World War II, the War Department created Air Defense Command and Tactical Air Command. These new commands, along with the existing Air Transport and Strategic Air Commands would be the foundation for what would soon become the modern U.S. Air Force, the independent branch of the armed forces that we recognize today.

On September 18, 1947, the United States Air Force was established. Stuart Symington became Secretary of the Air Force, and on Sept. 26, Gen. Carl A. Spaatz became the USAF’s first Chief of Staff. The new independent Air Force rapidly established its own identity apart from the Army.

The first challenge for the newly formed USAF came in 1948 at the start of the Cold War. Soviet authorities had blocked roads and air transportation from East Berlin to West Berlin, leaving the citizens of West Berlin exposed to possible starvation.

The USAF, the Royal Air Force, and Commonwealth Air Force combined efforts to supply West Berlin with food and provisions during the now famous Berlin Airlift. This operation saved the city from starvation and the Soviets ended their blockade.

The USAF and the Vietnam War

The USAF was heavily deployed in combat during the Vietnam War. In March of 1965, the USAF embarked on Operation Rolling Thunder which was a sustained bombing campaign.

The purpose of this unprecedented level of bombing was to eliminate the moral of the North Vietnamese, leaving them unwilling and unable to fight. The campaign targeted North Vietnamese air defenses, military production sites, and halt the flow of supplies coming in through the Ho Chi Minh Trail. Ultimately, the United States hoped the campaign would bring the North Vietnamese to the table for peace talks.

Despite Operation Rolling Thunder not achieving its ultimate mission, the USAF continued to play a critical role in Vietnam. The USAF’s Operation Linebacker and Operation Linebacker II helped the South Vietnamese Army repel invasions from the North and eventually led to the Paris peace negotiations. It was clear that the USAF had the power to influence war time outcomes even in the absence of Army ground troops.

In addition to the bombing campaigns, the USAF developed special operation capabilities during the Vietnam War. The guerilla fighting style of the North Vietnamese forced the USAF to create smaller, more agile units such as air commandos, search and rescue units, and aerial gunships.

Considered to be experimental at the time, these special forces are still called upon today.

Today, the United States Air Force is the largest air force in the world and has played major roles in the Gulf War and the Global War on Terror.

The history of the USAF is impressive, especially when you consider its roots were established just a few years after the Wright Brothers invented their working airplane.

Transitioning from the USAF, or any branch of the military, to a civilian career comes with many challenges. Translating your military experience to be applicable to civilian roles requires a certain expertise.

At Empire Resume, we know how to help veterans achieve career success! We specialize in writing resumes for members of the Air Force, Army, Navy, Marine Corps, and Coast Guard and are experts at helping servicemembers make the civilian transition.