A Brief History of the United States Marine Corps 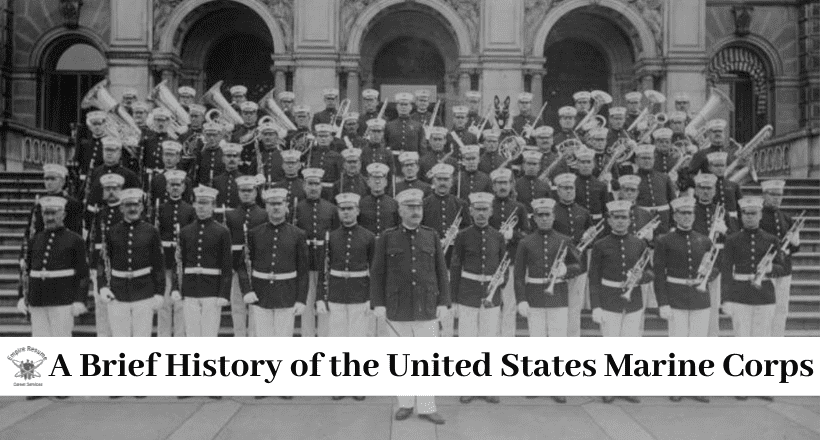 The U.S. Marine Corps (USMC) has the well-earned reputation of being one of the most formidable military forces in the world. This branch of the military is known for its rigorous bootcamps and the fearless attitude of its troops.

Empire Resume will look at the humble beginnings of the Marine Corps and how it has grown into the global fighting force it is today.

The Marines During the Colonial Era

The Second Continental Congress at Philadelphia passed a resolution in November of 1775 that established the creation of two Marine battalions. The battalions were not a separate branch of the armed forces originally. Rather, they served with the Navy as their landing forces. In general, Navy seaman stayed on water to protect ships and bombard enemies while the Marines handled on-land fighting when required.

The Marines During the 19th Century

In July of 1798, the Marines were re-established by Congress as a separate branch of the armed forces to fight against Barbary pirates who were launching from the north coast of Africa to attack American merchant ships.

The Marines also saw activity in the War of 1812, taking part in significant naval operations. Notably, the Marines fought under the leadership of Andrew Jackson to defeat the British at the decisive Battle of New Orleans.

Following the War of 1812, Marines were deployed to protect American interests in the Caribbean, Sumatra, and the Falkland Islands. The Marines were also involved in conflicts with the Seminole Indian tribe in Florida.

The Marines During the Mexican-American War 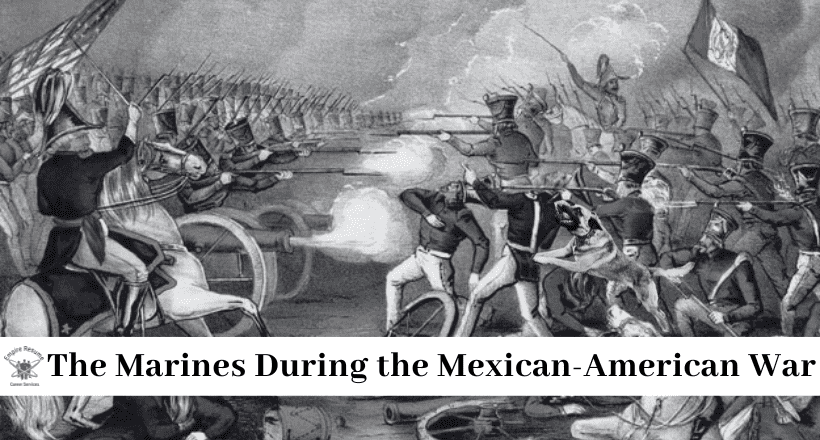 The Marines truly started to make a name for themselves as a formidable fighting force during the Mexican-American War that took place from the year 1846 to 1848.

Marine battalions proved themselves to be adept at seizing enemy ports along the Gulf and Pacific coasts in the conflict. In one significant battle, a Marine battalion joined the Army forces at Pueblo, and under the command of General Winfield Scott, fought their way to “Halls of Montezuma,” in Mexico City.

Later, The Halls of Montezuma would become the title of the Marine Corps anthem, written by John Philip Souza.

The Marines were called into action during the Civil War as well. Although the few water-based battles were handled by the Navy, the Marines fought bravely at Bull Run. They were also heavily involved in preventing supplies and ammunition from being delivered to New Orleans, Charleston, Fort Fisher, and other significant Confederate strongholds. These blockades severely crippled the Confederate forces and all but destroyed the economy—leading to the South’s eventual surrender.

The Marines During World War I

The USMC continued to fight with distinction in World War I. In particular, the 4th Marine Brigade earned the name “Devil Dogs” for their fierce fighting and heroic actions in several battles, particularly in the final Meuse-Argonne offensive.

Marine pilots were called into action for the first-time during World War I, flying bomber missions over Belgium, France, and surrounding territories.

The Marines’ bravery in battle came at a cost, however. Close to 30,000 Marines served in France during the war. Approximately 10,000 of them were killed or wounded in six months of intense action.

The Marines During World War II

The decades before the United States entered World War II, the Marines focused almost exclusively on developing the equipment, organization, and strategies to prepare them for amphibious warfare.

The success of that preparation was seen time and time again during World War II. The Marines showed their prowess at amphibious warfare, winning decisive battles on the shores of Guam, Tinian, Iwo Jima, Okinawa, Saipan, New Britain, and Kwajalein to name just a few.

At the end of the War, the Marine Corps had grown to include six troop divisions, five air divisions, and 485,000 troops.

The Marines During the Korean War

Marines landed at Inchon Korea in September 1950, proving that amphibious assault tactics that were solidified in World War II were still viable.

Despite early successes, once the Chinese Communists entered the war U.S. progress slowed in Korea. Marines were embedded in seemingly unending trench warfare, counter-offensives, and policing activities. The war finally ended with the last of Marine ground troops leaving in March 1955. Approximately 25,000 Marines dies or were wounded due to the Korean War.

The Marines During the Vietnam War

The 9th Marine Expeditionary Brigade landed at Da Nang in 1965, marking the start of large-scale Marine engagement in Vietnam.

By July 1968 the number of Marines in Vietnam peaked at 85,000. Shortly thereafter, the South Vietnamese took on a larger role in combat, enabling the Marines to start drawing down troops. By June of 1971, the last of Marine ground troops left Vietnam. However, the Marines did get heavily involved in evacuating embassy staffs, citizens, and refugees at the war’s official end in 1975.

The Vietnam War represented the longest conflict that the Marine Corps had ever been involved in. It unfortunately enacted a high toll as well with 13,000 Marines killed and 88,000 wounded.

The Marines in the Post-Vietnam Era

The mid-1970s saw the Marine Corps play an increasingly significant role in the peacekeeping missions of NATO. The Marine Corps was also a key player in the development of the Rapid Deployment Force—an organization created to ensure a flexible, timely military response to those in need anywhere around the globe.

During the 1980s, the Marines intervened in short-term, goal-oriented actions, including:

The Marines During Operation Desert Storm

In August of 1990, Iraqi forces invaded the nation of Kuwait, which led to the largest deployment of Marine forces since World War II.

Twenty-four battalions, 40 squadrons, and 90,000 Marines were sent to the Persian Gulf as part of Operation Desert Shield and Operation Desert Storm. The Marines led the main ground attack in that conflict in February 1991. In less than one week 4,000 Iraqi tanks were destroyed and 42 infantry divisions were neutralized.

The Marines During the 1990s

In December 1992, Marine battalions landed in Somalia. This marked the start of a 24-month humanitarian mission, delivering food, medicine, and other support services to the suffering nation. During that same time in another part of the world, the Marine Corp set up and supported a no-fly zone over Bosnia-Herzegovina.

In April of 1994, a Marine task force evacuated U.S. citizens from Rwanda to get them away from civil violence emerging in the country. In September of the same year, the Marine Corps aided the Haitian government in holding free and fair elections.

The Marine Corps Warfighting Laboratory was created in 1995. This Lab was charged with evaluating and analyzing new warfare technologies, methods, and strategies. They were instrumental in many of the modern, urban fighting techniques used in 21st century conflicts.

During the latter part of the decade, Marine Corps units were deployed to Liberia, the Central African Republic, Zaire, and Eritrea to protect citizens and evacuate Americans during periods of civil violence in those nations.

Soon after the September 2001 terrorist attacks on the Twin Towers and The Pentagon, Marine units were deployed to the Arabian Sea and set up a semi-permanent base of operations in the southern region of Afghanistan as part of Operation Enduring Freedom.

The Marines During the Global War on Terror

In 2002, the Marine Corps continued to play a key role in the Global War on Terrorism. Marines operated in several locations including Afghanistan, Iraq, the Horn of Africa, and the Philippines. By 2003, approximately 76,000 Marines were deployed to the Central Command area for combat operations.

Over the next 18 years, Marine forces would reduce and surge as combat, policing, and training operations continued in Afghanistan and in neighboring regions. All Marines left Afghanistan in 2022.

During the 2000s, the Marines were also able to respond to humanitarian crises on American soil. In 2005, 3,500 Marines were called upon to conduct search and rescue missions, humanitarian relief, and disaster recovery in the aftermath of Hurricane Rita and Hurricane Katrina.

In 2012, the Marines would step up in a similar fashion after Hurricane Sandy devastated many parts of the eastern coast of the United States. It was a brutal storm that left tens of millions without power, transportation, homes, or communication for weeks.

Today’s Marine Corps stands at the ready, able to continue the tradition of bravery, commitment, and loyalty shown by those that came before them. They are fierce warriors, ready to go in first to protect the nation and its allies. At the same time, The Marine Corps can be counted on when citizens of the United States or any other nation need relief from disaster, transport to safety, or protection.

Transitioning from the U.S. Marine Corps to a Civilian Career

Transitioning from the U.S. Marine Corps, or any branch of the military, to a civilian career comes with many challenges.

At Empire Resume, we know how to help veterans achieve career success! We specialize in writing resumes for members of the military and are experts at helping servicemembers make the civilian transition.

A Brief History of the U.S. Navy

A Brief History of the United States Army

A Brief History of the United States Air Force