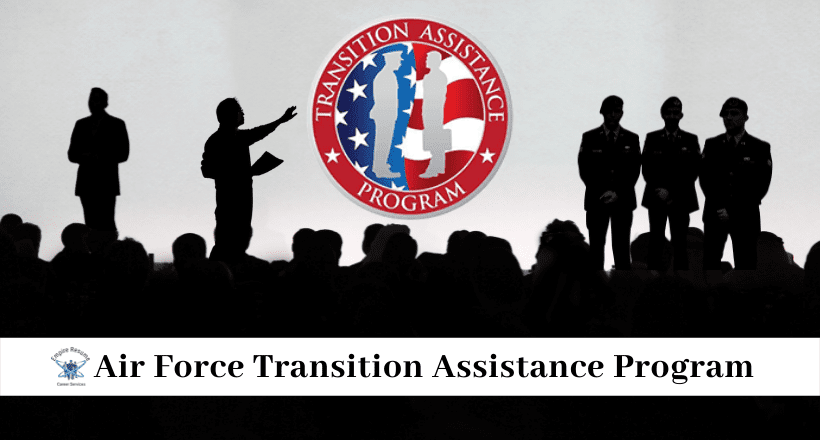 Despite the Air Force’s soaring retention rate, the Air Force Times reported that 5,700 active-duty Airmen separated or retired in September and October 2021. While these Airmen are now fully settled into the civilian environment, they all had to experience the Air Force Transition Assistance Program before walking away and hanging up their USAF uniform for good.

Although the Air Force, much like the other branches of the military, has its own transition program, many Airmen wish that they were better prepared. At Empire Resume, we specialize in career services for the military community, and we’re here to help you jump-start your new chapter of life.  The information we’re sharing about Air Force TAP includes:

What is the Air Force Transition Assistance Program? 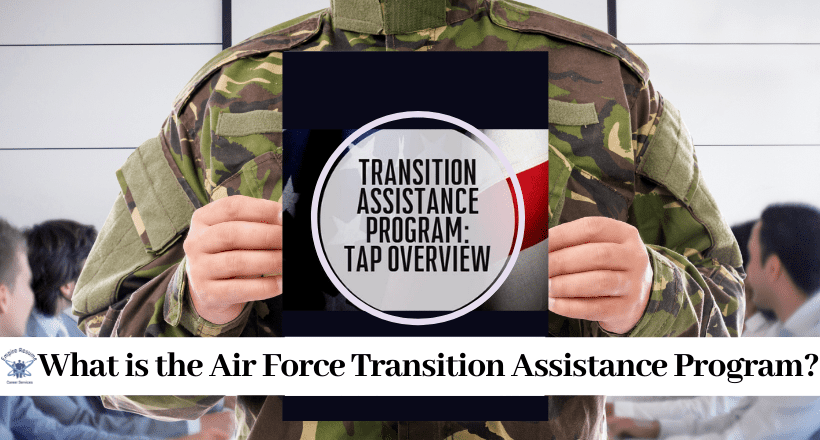 The Transition Assistance Program exists to provide information, tools, and training to ensure transitioning Airmen and their spouses are prepared for the next step in civilian life; whether pursuing additional education, finding a career, or starting a business.

Support is provided by the Airman and Family Readiness Centers at your local installation.

TAP is mandatory for all Airmen who have at least 180 days or more on active duty, including National Guard and Reserve. The program begins no later than 365 days prior to transitioning out of the military.

AFI 36-3037, Transition Assistance Program (TAP) for Military Personnel is the governing instruction for the Air Force TAP and it supplements DODI 1332.35.

The Air Force Executive Transition Assistance Program (E-TAP) is specifically designed to meet the transition needs of retiring Chief Master Sergeants (E-9) and Colonels (0-6), and above.

E-TAP is a 5-day workshop that also provides personnel with the necessary strategies to conduct a job search for a leadership position in the government, public and private sectors.

The primary difference between ETAP and TAP is training is geared toward the unique needs of senior ranking separating Airmen.

All branches of the military have an ETAP for senior-ranking military members.

Individualized Initial Counseling (IC) between the servicemember and a TAP counselor is the official start to the transition process.

Servicemembers complete a personal self-assessment and begin the development of their Individual Transition Plan (ITP) to identify their unique needs of the transition process and post-transition goals.

Servicemembers are required to provide a copy of their Community College of the Air Force transcripts (if applicable) and a copy of their Verification of Military Education and Training (VMET). The TAP counselor assesses all provided information to determine the members’ level of preparedness and assigns the required counseling and services based on the member’s needs.

DoD Transition Day is mandatory for all transitioning servicemembers and covers the following topics:

Led by VA Benefits Advisors, this mandatory course helps people understand how to navigate VA and the benefits and services they have earned through their military career. The course offers interactive exercises, real examples, and covers topics such as family support, disability compensation, education, and health care benefits.

The Department of Labor (DOL) provides a mandatory one-day course on preparation for employment.

Transitioning servicemembers may be required to attend a track, depending on their level of transition preparedness. They may attend more than one based on their ITP and post-transition goals. These include the: DOL Employment Track, DOL Vocational Track, DoD Education Track, and the Small Business Administration Entrepreneurship Track.

Capstone is the culminating event where commanders verify a member’s TAP compliance, achievement of career readiness standards, and ensures the member has a viable ITP. Capstone validates transition preparedness and should be completed no earlier than 12 months and no later than 90 days before separation or release from active duty.

TAP is a great program for transitioning servicemembers. It teaches them to use their Air Force values and translate their skills for the civilian workforce.

However, Air Force TAP misses the mark on the reality Air Force Veterans face once they are out of the military.

What the Military Community Has to Say About TAPs

Several Veterans have voiced their opinion on the transition assistance program. Some simply provided advice to others who are entering the transition phase.

They’re talking about it online, specifically on places like LinkedIn where they’ve built a support system.

At Empire Resume, we believe a marketable military-to-civilian resume is what will get your foot in a civilian door as an Airman. Merely listing awards and past evaluations won’t cut it.

The resume needs to be written in such a way that beats the applicant tracking system, otherwise, it will be rejected. There is a huge possibility that a manager will never review a transitioning Airman’s military-to-civilian resume as 75% of resumes are never read by a human.

The Applicant Tracking System (ATS) is a resume scanning software that sends, what it believes to be, the most qualified candidates to a recruiter. Think of the ATS as the middleman. The software serves as a gatekeeper to hiring managers.

Before a hiring authority even lays eyes on a resume, it must pass the ATS test first.

At TAPs, Airmen learn to stuff keywords, create multiple resumes for each role, and create lengthy resumes. These shortcomings create constant confusion, a lack of confidence, and leave transitioning servicemembers unsure of how to present themselves in the civilian world and make themselves viable employment candidates.

Take a certified professional resume writer’s advice: One resume is all you need, beware of keyword stuffing, and keep your resume under two pages.

For more information about resume writing, check out the following articles by Empire Resume, specifically for the military:

By law, transitioning Airmen are required to initiate TAP mandates no later than 365 days from their date of separation (DOS) or date of retirement (DOR).

You are also required to complete TAP mandates not earlier than 365 days and no later than 90 days from your DOS or DOR.

As an Air Force Veteran, my experience with TAP was very forgettable and provided little benefit to help me with my job search.

During my tenure as a certified professional resume writer, I’ve seen thousands of resumes from military members transitioning into the civilian working world. I’m always amazed at the number of low-quality resumes that come across my desk from Airmen and other fellow servicemembers who just completed Transition Assistance Programs.

We’ve helped thousands of Veterans achieve career success and we know we can do the same for you. Here’s how Empire Resume helps Airmen combat TAP’s mishaps:

Don’t let the excitement of starting your new civilian life stop you from making yourself a viable candidate in today’s workforce.

Stop by and let us honor you with a $25 military discount. We’ll even perform a free resume review to see if your TAP-generated resume is civilian-ready and will help you position yourself as a viable candidate in today’s workforce using the latest and greatest developments in the career industry.

The Empire Resume team works to expertly transform the military experience, skills, and achievements of Airmen into a compelling military to civilian resume that generates results. We guarantee it.