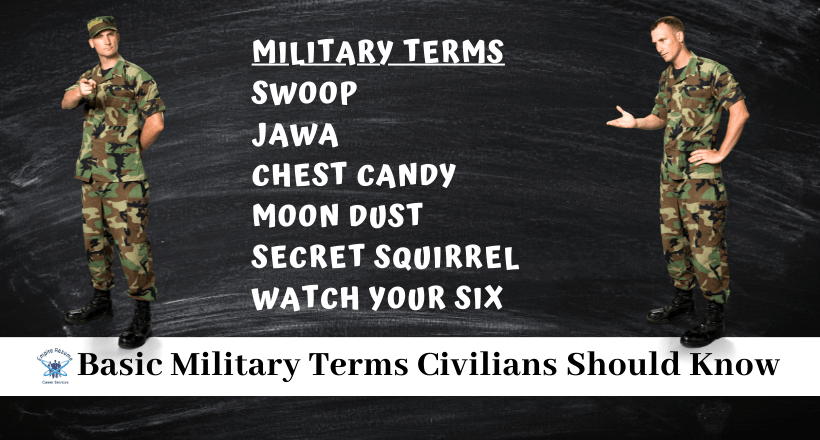 Terminology and slang are common in different parts of the U.S. and other areas of life, such as the business and sports world. This is especially the case in the U.S. military, where each branch has its own unique phrases.

Servicemembers need to be expedient and precise when talking to each other, which necessitates using slang words and unique terminology. Newcomers to the military often feel like they’re learning a new language when they start to pick up on military speak.

Some military terms are self-explanatory, while others are more cryptic. Empire Resume will give a run-down of military terms civilians should know, including phrases and slang that have been around for a while and others that originated during the wars in Iraq and Afghanistan.

Certain awards and medals demand respect from others, but not all of them. In the military, it’s easy to identify someone as a “teacher’s pet” by the number of lesser awards they have that are common among lower ranks.

The term “chest candy” refers to these lesser awards – a generally derogatory term for medals that don’t mean that much. “Chest candy” can be used in a good way, too, but if it’s used sarcastically, it means the person who said it doesn’t think much of your various medals and ribbons. 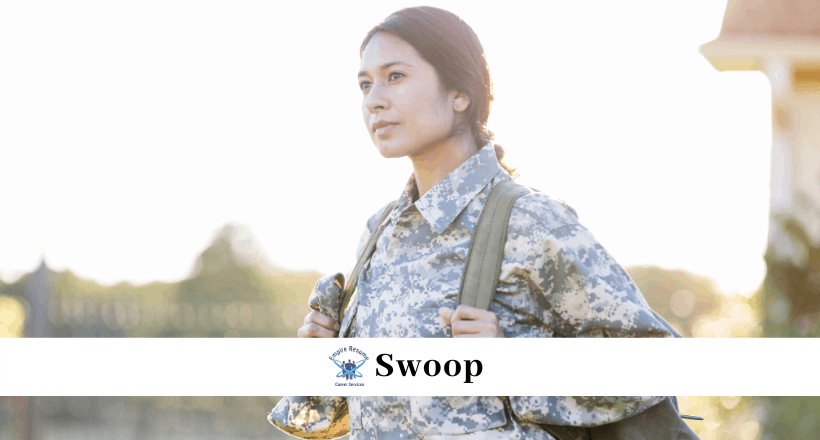 This is a term specific to the U.S. Marines, which means taking a weekend trip off base. Usually, “swoop” means taking a long, authorized trip in a short time to avoid an unauthorized status.

If this term sounds familiar, it means you’re probably a Star Wars fan. Jawa is slang for an Army soldier, usually of low rank, stationed in a desert area. The term comes from the desert-dwelling aliens in the Star Wars films.

Here’s another term that may sound familiar. That’s because “no man’s land” was borrowed by civilians from military use and is a fairly common phrase in everyday vernacular. The term goes back a long way, too – all the way to World War I.

“No man’s land” was a term used by soldiers in WWI to describe the area between two trenches. It acquired its name because of how dangerous it was, consisting of enemy fire, barbed wire, and shell holes.

This is a funny term used to describe the rumor mill or gossip between soldiers. There’s a lot of downtime in military life, so rumors run rampant as soldiers try to figure out what’s going to happen next. Many of the rumors don’t come to fruition, but the “private news network” at least keeps people entertained.

Military members commonly describe directions by using the hours of a clock, which is where this term comes from. Wherever the vehicle or soldier is looking ahead is 12 o’clock, so six o’clock is directly behind them. Therefore, saying “watch your six” is the same as saying “watch your back.”

This is another term that’s been borrowed by civilians, so you may recognize it. Servicemembers also say “got your six,” to indicate they’re watching behind their partner’s back for enemies or enemy fire.

Here’s a term specific to the recent wars in Iraq and Afghanistan. “Moon dust” refers to the dust that servicemembers said seemed to cover everything in southern Afghanistan and a large part of Iraq. Soldiers deployed in the wars said the desert sand they called “moon dust” was powdery and flour-like and had the consistency of talcum powder.

Barney? As in the purple dinosaur from the old kids’ show Barney & Friends? That’s right. A common military slang term, “Barney-style,” is when something is explained so simply that a child could understand it. Often, the term is used as “Breaking it down barney-style.”

This is an older term specifically used in the U.S. Navy that refers to any piece of paper or form or even currency. The U.S. Navy History Museum traces the origin of this sailor slang to the days when Hindu traders used slips of paper for money and called it “citthi.”

Most civilians will recognize this slang term when “G.I.” is placed in front of it. “Joe” is an Army and Air Force term used to generically refer to a soldier. Frequently, “Joes” are junior enlisted personnel, and a single soldier is sometimes referred to as “Private Joe Snuffy.”

The phrase “G.I. Joe” goes back a long way, even before Hasbro created the immensely popular action figure with that name in 1964. Five-star general and future president Dwight D. Eisenhower said in 1945 that the heroes of World War II were “G.I. Joe and his counterpart in the air, the Navy, and the Merchant Marine of every one of the United Nations.”

This term sounds funny, but it refers to serious business. The phrase is used throughout the military and intelligence community to refer to secret communications or classified op that a servicemember doesn’t need to know.

The origin of “secret squirrel” is a bit murky. In the 1960s, a popular cartoon T.V. show about spies starred a squirrel and was called, of course, Secret Squirrel. One story goes that military members liked the phrase so much that they adopted it. Another story claims “secret squirrel” pre-dates the T.V. show and goes back to World War II, as the phrase referred to German spies.

Slang to Impress Your Friends

We listed several common military slang terms civilians should know, but there’s plenty of others we left out. Terms like “Alpha Charlie,” “fast mover,” “rotorhead,” and “hit the silk” are just a few that come to mind that are unique slang that servicemembers probably know.

Some slang – like G.I. Joe – you should recognize because it broke into mainstream popular culture. Other terms – like “moon dust” – you’ve probably never heard of. Either way, now that you know some common military slang feel free to impress your friends by using it every so often. And the next time you talk to a veteran, you’ll be ready if he or she uses one of these phrases!

We’ll create a compelling resume package and give you everything you need to get the job you deserve. We work with all levels of job-candidates, from entry-level to C-Level executives within all industries. Every resume we create is fully ATS optimized and will clearly showcase your skills, experience, and the value you bring to employers. Click here to get started or email us at info@empireresume.com for a free resume review!