Famous Dogs in the Military 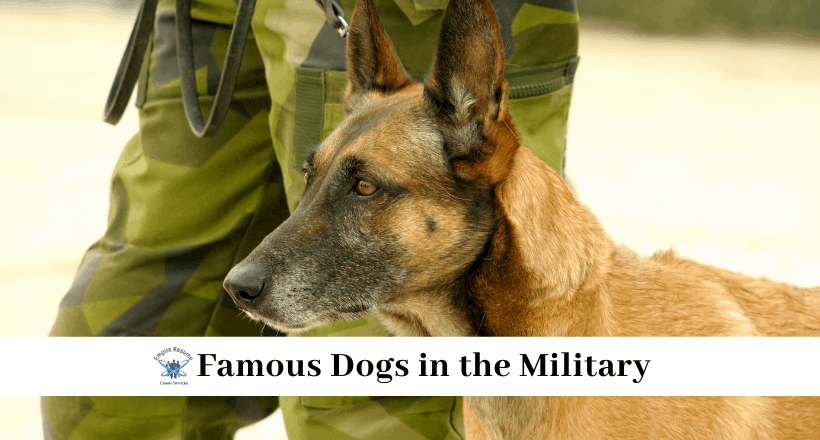 What does a Labrador Retriever, Terrier, Belgian Malinois, Doberman Pinscher, and German Shephard have in common? Besides being man’s best friend, they also serve in the military. An Army article says military working dogs are guardians of the night.

At Empire Resume, we strive to shed light on the military experience, and this week we are paying tribute to the hardest working canines in military history. First, let’s give you some fun facts you might not have known about military working dogs (MWDs). 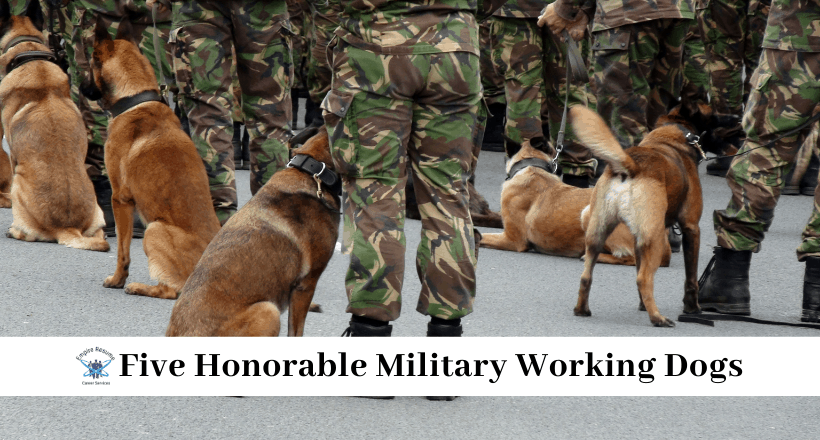 In no particular order, below are five dogs who will blow you away with their devotion and dedication to the United States and the U.S. Armed Forces:

Stubby is the legendary bull terrier who is credited with being the first war dog. Dubbed Sergeant Stubby by the Marine Corps, his bravery in World War I saved many U.S. Soldiers, making him the most decorated dog in American history.

He was a stray dog roaming the streets of New Haven, Connecticut when he was adopted by Corporal J Robert Conroy before he shipped out to serve in World War I.

Hear about the amazing story by watching the 2018 animated film, Sgt. Stubby: An America Hero.

K-9 Conan was wounded in the Al-Baghdadi raid when the Islamic State leader detonated a suicide vest after being chased into a dead-end tunnel, killing himself and three of his children.

For her great acts, Conan was presented with a medal and certificate for her bravery by former President Trump.

Gabe began service to the U.S. Army as a military working dog in 2006 after the military rescued him from a pound in Houston, Texas. Alongside his handler, Sgt. 1st Class Charles Shuck, he has been stationed at Fort Lewis Washington, Fort Bliss, Texas, Fort Leonard Wood, Missouri, and Fort Hood, Texas.

During his tenure, Gabe sniffed out insurgent bombs, guns, and ammo. He completed over 200 combat missions in Iraq with 26 finds of explosives and weapons, the largest of which was a cache of rounds located on the banks of the Tigris River.

When Gabe left Iraq, he walked away with three Army Commendation Medals, an Army Achievement Medal, and dozens of coins of excellence. For his work, Gabe received the top award of American Hero Dog in 2012 by the American Humane Association.

Gabe retired from military service in 2009 with more than 40 awards and coins for his extraordinary work. After all of his successful missions, Gabe lived a leisurely lifestyle.

In February 2013, Gabe passed away in his handler’s arms, due to suffering from cancer in his liver and spleen.

Sallie Ann Jarrett was a Staffordshire Terrier who served with soldiers in the Civil War as the mascot of the 11th Pennsylvania Volunteer Infantry. The men named her after their commanding officer, Colonel Phaon Jarrett, and Sallie Ann, a local beautiful woman.

During the Battle of Gettsyburg, Sallie was separated from the infantry while fighting, but she was found three days later. She was still on the battlefield guarding wounded soldiers.

In 1865, Sallie was killed in action at the Battle of Hatcher’s Run in Virginia. Today, you can find a granite and bronze memorial statue of Sallie at the Gettysburg National Military Park in Gettysburg, Pennsylvania.

Chips, a German Shepherd-Collie-Husky mix, was one of the first military working dogs sent overseas. His owners, the Wren family of New York, donated Chips to the Army when the Defense for Dogs Program was initiated.

Chips served in the military during World War II, with the third infantry in France, Germany, Italy, and North Africa. He completed several missions, including performing sentry or guard duty during the 1943 Casablanca Conference between former President Roosevelt and former British Prime Minister, Winston Churchill.

Chips was awarded the Silver Start and Purple Heart for attacking an enemy machine-gun nest in Sicily and forcing the six-man crew to surrender.

Despite his efforts, the Army revoked the awards, deeming Chips ineligible because they felt it was demeaning to service members to give medals to animals.

In 2018, Chips was posthumously awarded the PDSA Dickin Medal for his efforts during the war. This is the highest honor any animal can receive for military service. The Animals in War & Peace Medal of Bravery followed in 2019.

When you or someone you know is in need of career services, contact Empire Resume for help with sprucing up resumes, creating a gleaming LinkedIn profile, and writing a winning cover letter that’ll knock a hire manager’s socks off. Our professional resume writing services delivers results, guaranteed!