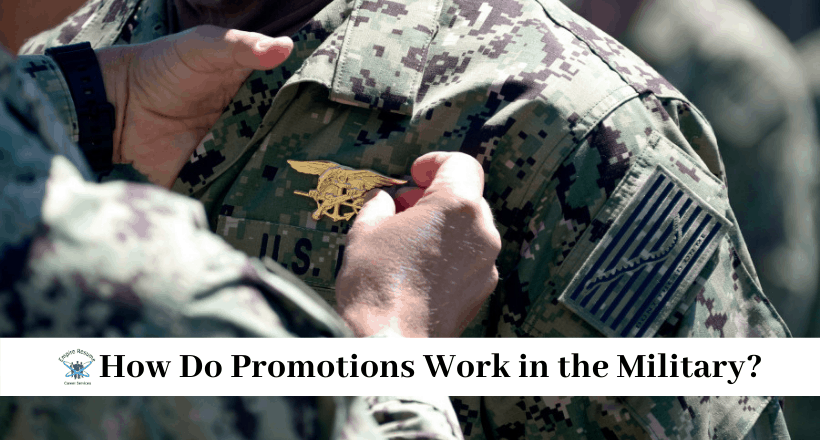 Just like in the civilian world, promotions in the military are a significant milestone in a service member’s career. A promotion is a reward for their hard work, commitment, job performance, and the branch’s belief in their abilities to excel at a higher level.

Because service members advance in rank, promotions come with more responsibility, sacrifice, and accountability. The process for military promotions is different than those in civilian careers. As a professional resume writing services company who works with military, veterans, and those who are interested in the unique military experience, one question we’re always asked is, “How do promotions work in the military?” Because inquiring minds want to know, Empire Resume is providing a brief overview of the factors involved in military promotions.

Early in a service member’s career, promotions come much faster. They are automatic for both junior levels enlisted up to E-3 and officers, in the beginning, but as they advance in rank, promotions won’t come as easily or frequently. The primary factors that impact promotions in the military include:

Promotion Timelines for Officers and Enlisted 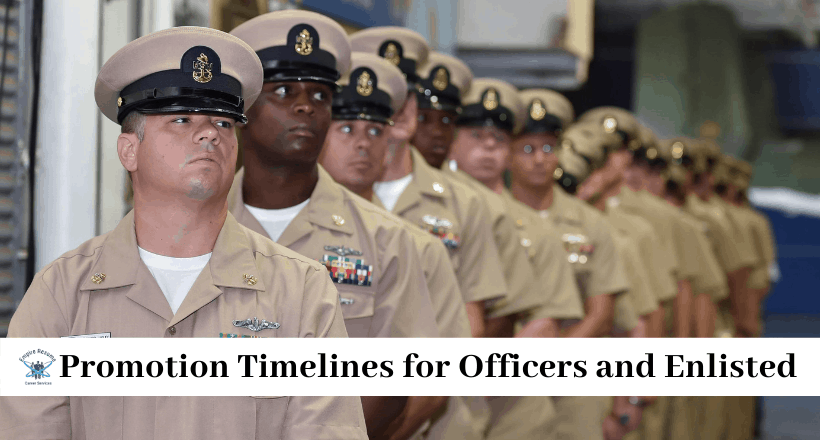 Authorizations, losses, and promotions to the next higher grade create changes in both the time in service (TIS) and time in grade (TIG) for each military service. However, the Department of Defense requires that promotion opportunities for commissioned officers be approximately the same for all the services, when possible, within constraints of available promotion positions.

The chart below shows the when military officers can expect to be promoted based upon their time in service. Minimum time in grade for promotion is established by federal law, 10 U.S. Code, and is shown below:

Congress controls how much enlisted personnel can be on active duty at any point in time, and the maximum numbers of people that can serve in pay grades above E-4. A service member cannot be promoted until there is an opening in the next rank.

Often, promotions do not take effect immediately. It’s possible for a service member to wait months until the promotion is official.

Each branch of the military, has its own methods of promoting service members. According to Military One Source, the approaches are as follows:

Soldiers receive “duty performance points” from unit commanders when they demonstrate qualities of the next rank, including competence, military bearing, and leadership. Certain point counts are required to achieve the next rank.

Airmen compete for promotions past E-4 through service records and recommendations from superior officers. Some Airmen qualify for accelerated promotions to higher ranks through special programs such as below the zone or stripes for exceptional performers.

Marines compete for promotions after E-3 pay grade. They need good scores on their service records, which combine factors such as physical fitness test results, time in service, and conduct and duty proficiencies.

Sailors compete for promotions past E-3 using a combination of exam scores and a point system. Points are awarded for time served in specific jobs, awards, completed schooling and other factors.

Although the Coast Guard is a part of Homeland Security, in times of war, they are a part of the Navy. Overall, Coast Guard promotions are based on merit, eligibility exams, evaluations, and appointment.

Guardians may be going before panels to achieve higher ranks. According to Air Force Magazine, the Space Force is eyeing promotion boards for ranks above E-4.

Every military promotion, no matter how big or small, is an achievement worth celebrating with a promotion ceremony. A ceremony affords the opportunity to receive recognition from fellow service members, family, and friends. These ceremonies are filled with tradition and history based on each branch, and may involve exchanging coins, a pinning ceremony, and a reception with cake.

It is customary for the spouse and children to participate in the pinning ceremony by pinning the new rank on the service member. However, a close friend or anyone else who may have made an influence on his or her life may do the honors.

At Empire Resume, we not only share the curiosity about how military promotions work, we know how it works firsthand. As company founder, I’ve gone through the promotion process myself and have watched others do the same. When you or someone you know is ready to begin their career search outside of the military, contact the best military-to-civilian resume writers at Empire Resume. We deliver results, guaranteed!

What are the Disadvantages of Going into the Military?