How to Apply to a U.S. Military Academy 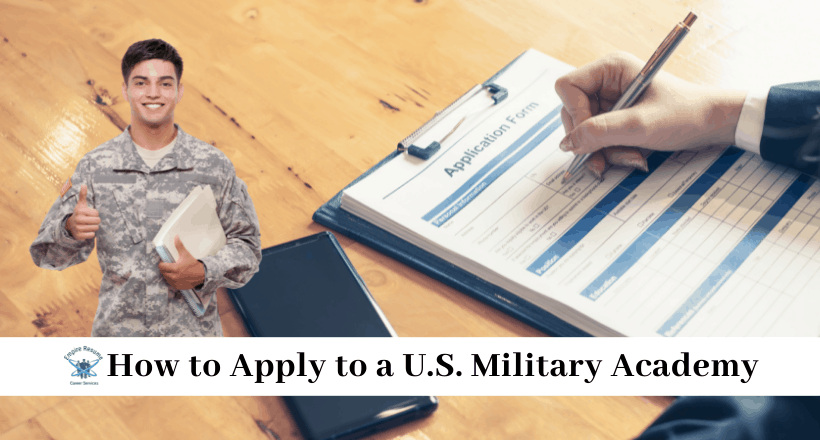 The United States Military academies, also known as U.S. service academies and military service schools, have the most stringent admission standards in the nation. Many high schoolers flock to the opportunity to attend a U.S. military academy because of fully paid tuition, room and board, medical care, access to a high-quality education and job after graduation, but competition is fierce and space is limited.

According to the National Center for Education Statistics (NCES), 41,989 people applied to the five military academies for the class of 2023. However, once admitted into a military academy, students find their way in a membership called the corps of cadets and earn their place at an institution that has produced some of the nation’s top military leaders.

If you’re up for the challenge of attending a military academy, Empire Resume will walk you through the rigorous admission process, step-by-step.  Today, we’ll discuss:

Now, let’s show you the schools you have to choose from. 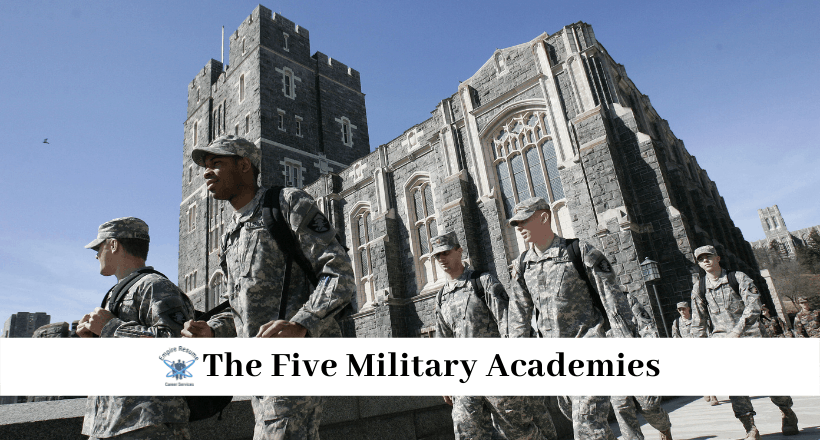 In no particular order, the five U.S. service academies are:

To be eligible to apply for one of the five U.S. military academies, you must meet the following requirements:

In addition to the eligibility requirements, aspiring academy cadets must adhere to military tattoo policies and ensure they are physically fit.

Physical fitness is a requirement to enter military service. So, during the admissions process, prospective cadets will be given the Candidate Fitness Assessment or CFA. The CFA consists of six physical and motor fitness events designed to measure muscular strength, endurance, cardio-respiratory endurance, power, balance, and agility.

Here’s a quick tip: Take your medical exam as soon as possible as it can take several months to get qualified. If you haven’t been scheduled for the DoDMERB by the fall of your high school senior year, contact your regional admissions officer.

On the academic side, virtually all cadets are scholars and well-rounded individuals from the top 25% of their high school class. Academies expect for transcripts, and college entrance exam scores from the SAT and ACT to be top notch.

Before we explain how the application process works, we’ve included links to help you apply to your chosen military academy:

Here’s how to claim one of the limited spots at one of the service academies:

First, create a candidate or applicant profile through the school’s website. Opening a profile is the only way to initiate the application process. Make sure you adhere the application deadlines and submit any questionnaires and other information well in advance.

To apply for a nomination from the Vice President, you can find information on the White House’s service academies nomination webpage.

Any candidate that does not provide the academy with notice of nomination by the respective deadline may be disqualified.

Service-connected nominations are also available for the following:

Be sure to check the respective academy for service-connected nomination options. Keep in mind, it is not necessary to seek a nomination to the Coast Guard Academy, as the USCGA accepts candidates based on their own testing criteria.

When Will I Know if I’ve Been Accepted by a Military Academy?

Academies will begin to notify candidates of their admission status in February. All offers of appointment are generally sent out by May.

Is a Military Academy Right for Me?

The military academies are among the best institutions in the country. Only you know whether attending one of them is right for you. But if you have the character, grit, and determination, you have a fair shot. Empire Resume will be here with you every step of the way in your military career.

Be sure to bookmark Empire Resume’s military blog for more insight, so you’ll know what to expect as you go through your military career. We’re always here to help with your career planning needs and deliver results, guaranteed!