How to Get a Job at Apple 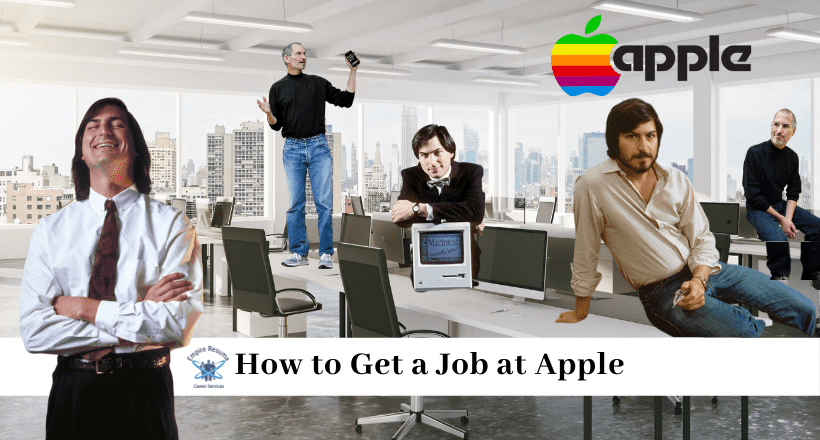 Getting a job at Apple is the pinnacle of a tech career for many people. And while it may be challenging to secure a position at Apple, it’s not impossible.

Apple was founded in 1976 by Steve Jobs and Steve Wozniak, two college dropouts who would transform the world of computing and technology over the years. Steve Jobs passed away in 2011, but Apple has continued to thrive as one of the most dominant tech companies in the world. The company is considered one of the Big Five American tech firms, along with Meta (Facebook), Microsoft, Amazon, and Google.

People love working for Apple as much as they love its ubiquitous products. Apple is often named the world’s most valuable brand, and, as of January 2021, there were currently 1.65 billion Apple products in use worldwide. Apple has been ranked among Glassdoor’s Best Places to Work every year since 2009, which is a testament to its first-class wages and benefits, exciting work environment, and loyalty to its employees.

One of the best ways to score a job at Apple is through networking with other employees who work there. According to Glassdoor, only 55% of its users landed an Apple job through applying online. The rest of them got the coveted position through employee referrals, recruiters, and on-campus recruiting.

Empire Resume will explain what the hiring process is like at Apple and let you know the ways you can land a job there, including what types of jobs are available, how to excel at an interview, and how long it may take.

What Types of Jobs are Available at Apple? 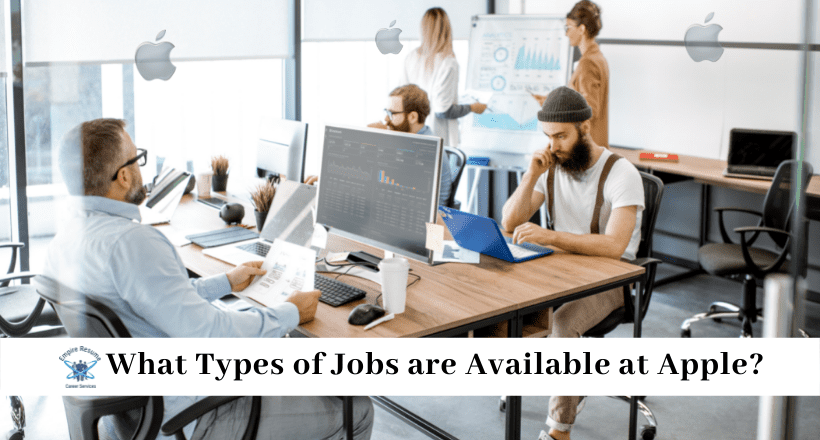 If you want a job at Apple, one of the first questions you should ask is which type of job. As of 2020, Apple employs about 147,000 people in locations worldwide, including its featured corporate offices in San Diego, Israel, Munich, Singapore, and Austin, Texas. In early 2021, Apple said it plans to add about 20,000 jobs in the U.S. over the next five years.

According to its website, Apple’s jobs span a wide range of roles, such as designers, scientists, retail, customer support, marketing, and hardware and software engineers. For example, Apple tech support call centers that serve North American customers employ about 13,000 representatives across the U.S. And Apple notes that, unlike many companies, both part-time and full-time employees are eligible for benefits like health insurance and matching retirement contributions.

The company had about 5,000 employees when it launched the iMac in 1998. Since then, its employment grew 1,500% to 80,000 workers in 2016. Working in an Apple retail store is one possibility, and there are many locations. Since launching retail stores in 2001, Apple has more than 500 of them worldwide, including 272 in the U.S. and more than 50 in California alone.

On the corporate side, some of the departments you could work for at Apple include:

How to Apply for an Apple Job

As we mentioned, networking is often the best way to land an Apple job. Barring the chance you get lucky networking with an Apple employee, your second-best shot is to apply for a position on Apple’s careers website.

Keep your education and career experience handy when filling out the online Apple application and be ready to answer questions like, “What motivated you to apply for this position?” and “Why do you want a job at Apple?” Answer these questions professionally and honestly, but be creative with your answers, too, and don’t respond too generically. The goal is to impress and stand out.

Before the phone and in-person interviews, practice makes perfect. Look up the types of questions you’re most likely to be asked on Glassdoor, and practice your answers with a mentor or friend. Some of these questions could include:

Also, be sure to research the company before the interview so you’re familiar with Apple’s history, products, and latest trends.

Depending on what type of job you apply for, the interview process may look a bit different. Either way, most people say the hiring process can be pretty quick at Apple, and everything is done in a very professional and polished manner. Hiring managers have a keen sense of seeing through vague answers, so the interviews can be nerve-wracking, according to people who have interviewed at Apple before. This is even more reason to practice answering interview questions a whole bunch before the real thing.

Empire Resume Can Help You Land an Apple Job

Apple is a massive employer in the United States and worldwide, and working there is a dream-come-true for many people. The tech giant is often cited as one of the best places to work in America, and they offer world-class salaries and benefits. Getting a job at Apple is very competitive, but it’s entirely possible if you do your research and be persistent.

At any given time, Apple has about 6,000 jobs posted on Glassdoor and other sites for positions from retail jobs to software engineers. Set up job alerts for these positions and keep track of openings. Also, brush up on your networking skills and reach out to Apple employees and people who may know someone who works there and let them know your interest. Current Apple employees often have an incentive to refer people to apply there because they sometimes get cash bonuses for successful employee referrals.

Be sure to stay tuned to Empire Resume’s blog for more career and employment insights, including articles like The Importance of a Follow-up Letter, The Hybrid Work Environment, and How COVID has Changed the Workplace.