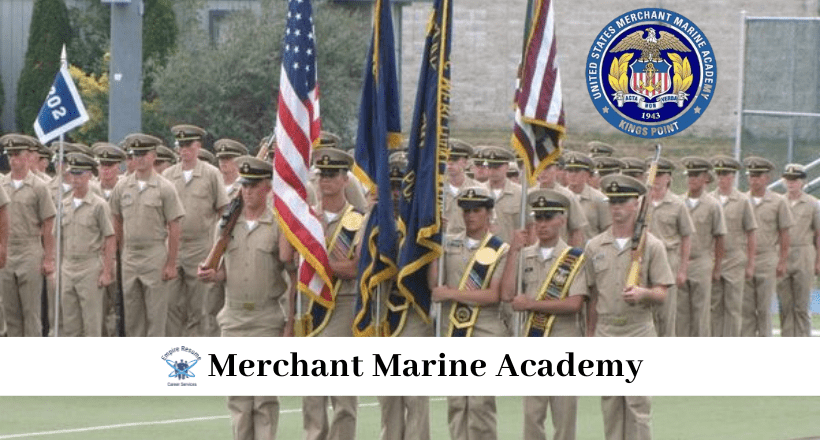 When most people think of U.S. military service academies, they usually picture West Point, the Air Force Academy, and the Naval Academy. But there’s another military academy you may not have heard of, the Merchant Marine Academy.

You can find the Merchant Marine Academy (USMMA) in Long Island, New York, only about 20 minutes from New York City. The Academy is typically called Kings Point (where it’s located), and students are called midshipmen instead of cadets.

After you graduate from the USMMA, you have two options: commission into any branch as an Active Duty servicemember or join the U.S. Naval Reserves as a Strategic Sealift Officer. Those who commission into active military duty must serve for at least five years. If you commission into the Naval reserves, you must serve as a Merchant Marine Officer for six years.

Empire Resume will explain what the Merchant Marine Academy is, including how to get in and how long you can expect to be there. 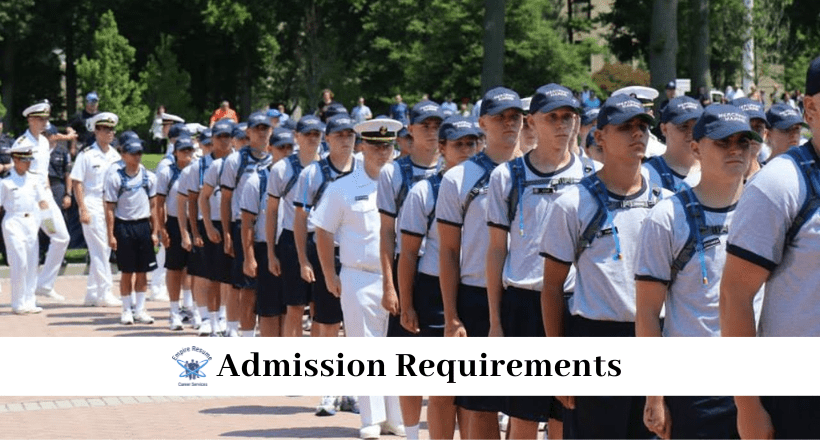 The Merchant Marine Academy was established in 1943 and is administered by the U.S. Maritime Administration. Gaining admission to the academy is challenging. Along with having high standardized test scores and a strong GPA, candidates who gain entry to the academy must also:

The Merchant Marine Academy only accepts the best of the best. And if you do get accepted, you can expect a very rigorous schedule.

Admitted candidates enter the academy in early July and quickly start a two-and-a-half-week indoctrination period run by instructors and supervised by the U.S. Maritime Service. The “indoc” is stressful and an intensive introduction to life at the academy that includes physical training, history lessons, customs and courtesies, and ceremony and drill. It’s like boot camp.

If you make it through the “indoc,” you earn the title of “plebe candidate.” The academic year starts in late July, and Acceptance Day is in September. If you make it that far, plebe candidates join the U.S. Navy Reserve. As a plebe, you’ll have to follow strict rules that govern your daily life until the following spring, when you’re recognized as a midshipmen and restrictions are lifted.

All five majors are grouped as “Deck Majors” and “Engine Majors.” The Deck Majors learn about ship navigation, cargo handling, and maritime law. Completing these majors will grant you a Third Mate license for work on steam or motor vessels.

The Engine Majors are the engineering ones, where students learn about the ships’ engine’s function and supporting systems. Completing these majors will get you an issuance of a Third Assistant Engineer license for steam and motor vessels of any horsepower. Graduates of these majors are also qualified to take the Engineer in Training exam.

What Happens After Graduation? 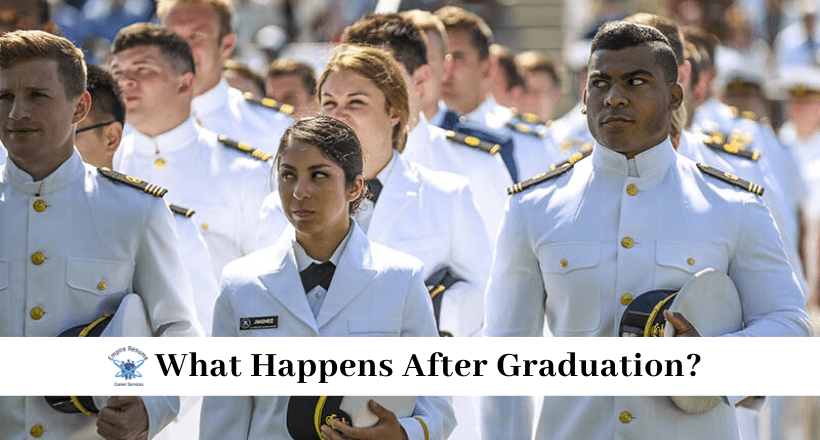 What happens after graduation from the Merchant Marine Academy? Midshipmen who graduate have plenty of options. Unlike other federal service academies, USMMA graduates must fulfill their service obligations independently and provide annual proof of employment in various approved occupations.

One of these occupations includes working as a licensed officer on a U.S. merchant vessel, as a civilian in the maritime industry, or as an active duty servicemember in any branch of the U.S. armed forces. Either way, graduates must maintain their U.S. Coast Guard-issued merchant marine officer license for at least six years.

On average, about one-third of each Merchant Marine Academy graduating class goes off to sea to work in the Merchant Marine. Another one-third of graduates work in commercial shipping, ship repair, marine engineering, or other specialties in the American maritime industry. The remaining graduates enter the U.S. military as active duty commissioned officers. Most of the graduates who do this join the U.S. Navy.

Life in the Merchant Marine Academy isn’t easy, but if you complete the four-year program, you’ll leave after graduation with a Bachelor of Science degree, a U.S. Coast Guard License as a Merchant Marine Officer, and a directive in the U.S. Navy Reserve. If you choose active duty, you’ll be required to serve for at least five years in the armed forces.

Another unique part of the Merchant Marine Academy is the “Sea Year.” Midshipmen at the academy work as either deck cadets or engine cadets for 300 days at sea while at the academy. The Sea Year typically happens between sophomore and junior years at the academy. 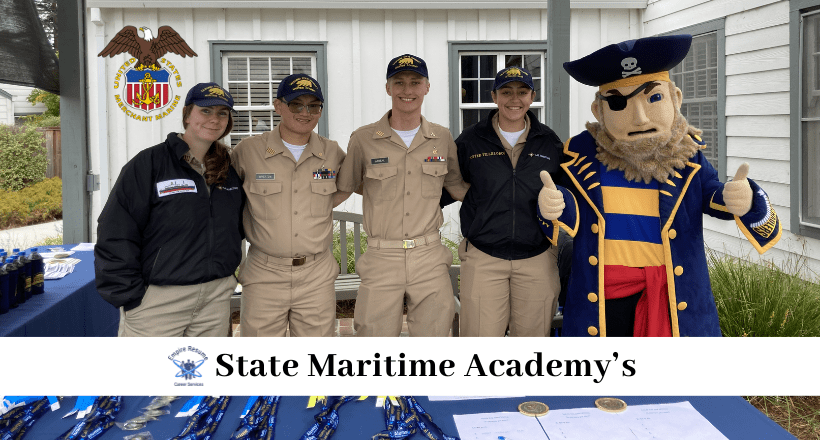 The Merchant Marine Academy may not be the foremost thing you think of when imagining federal service academies, but it’s an excellent option for folks interested in a maritime career or joining the U.S. armed forces.

Midshipmen and women at the Merchant Marine Academy receive a top-notch education and can set themselves up for a bright future with plenty of options. And if the federal Merchant Marine Academy isn’t up your alley, you can always choose to apply to a state-run maritime academy, such as the Massachusetts Maritime Academy or the Maine Maritime Academy, both of which regularly rank in Money’s Best U.S. Colleges.

Admissions requirements aren’t as strict at state-run maritime academies, tuition prices are relatively affordable, and you’ll get excellent training for a future high-paying job in a growing and huge U.S. maritime industry.

Stay tuned to Empire Resume’s blog for more helpful articles about military life and transitioning to civilian employment, such as Best Jobs for Veterans, Family Life in the Military, and How to Use Your GI Bill Benefits.

Dr. Phillip Gold is President/CEO of Empire Resume and has extensive experience writing resumes for professionals and servicemembers transitioning from the military into civilian roles. He served as a Captain in the U.S. Air Force and was responsible for leading nuclear missile security. Phillip is a Certified Professional Resume Writer and holds a B.A. in Communications from The Ohio State University, an M.S. in Instructional Technology, an MBA in Finance, and a Ph.D. in Finance. 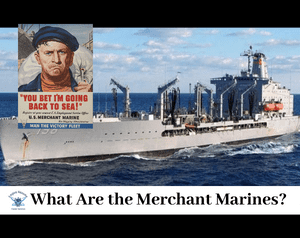 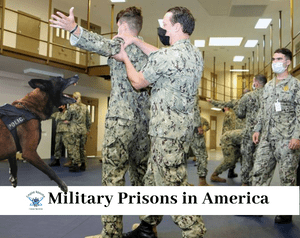