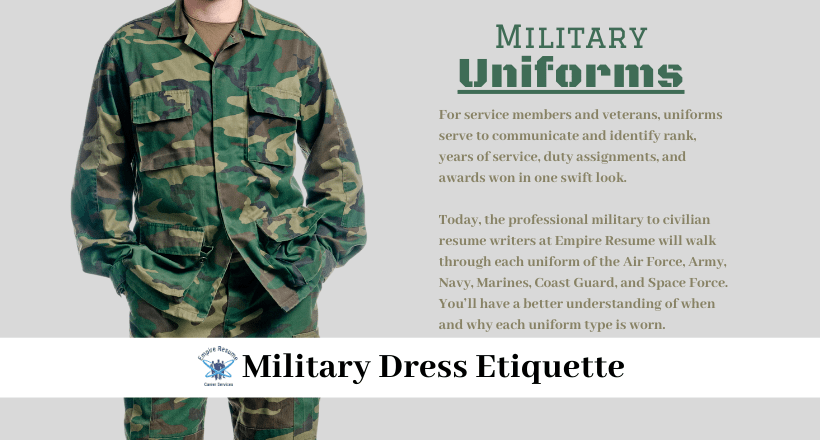 The first military uniforms can be traced back to 1779 when General George Washington commanded the Continental Army. Military dress and designs have gone through many changes over the years.

For service members and veterans, uniforms serve to communicate and identify rank, years of service, duty assignments, and awards won in one swift look.

Each branch of the military has four types of uniforms that serve a unique purpose:

Today, the professional military to civilian resume writers at Empire Resume will walk through each uniform of the Air Force, Army, Navy, Marines, Coast Guard, and Space Force. You’ll have a better understanding of when and why each uniform type is worn. A brief description of the four military uniform types is below:

The combat uniform is casual dress that can be worn for everyday work and combat duty purposes. This uniform comes in a camouflage pattern consisting of a jacket, pants, t-shirt, boots, and cap or cover, as we say in the military.

On the left breast pocket of the uniform, you’ll notice the name of the service branch written in all caps. U.S. AIR FORCE, for example.

Combat uniforms are considered to be a most comfortable uniform of all, while allowing the military to be combat ready. 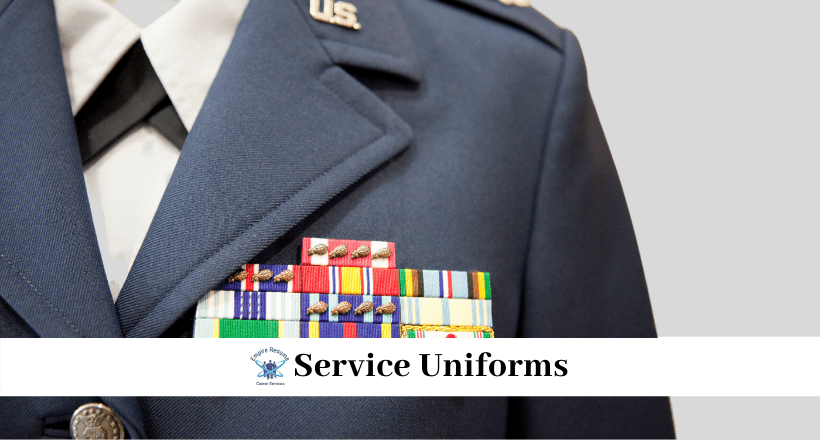 Think of the service uniform as business wear. Service uniforms can also be worn every day as they are used in office environments and when service members engage with the public.

Service uniforms may be worn at funerals and memorial services, weddings, inaugural events, and parades.

Dress uniforms are formal and may be a modified version of the service uniform.

Commonly referred to as “mess dress,” this type of uniform includes a formal jacket, much like a blazer, slacks or skirts for women, and dress shoes.

This type of uniform is worn at military balls, and other ceremonial events.

These uniforms are typically referred to as PT or physical training uniforms and are used for work outs and physical fitness.

PT uniforms typically consist of a t-shirt, shorts, jacket, sweatpants, or windbreaker outfits. Accessories such as reflector belts may be a part of the uniform when members are working out in the dark.

The Air Force just redesigned its PT uniform, making this the first update to the PT uniform in more than 16 years, according to an Air Force news release.

Each service branch has different uniform styles or designs. It can be difficult for civilians to determine which branch a service member is a part of at first glance.

Let’s break down each uniform by branch: 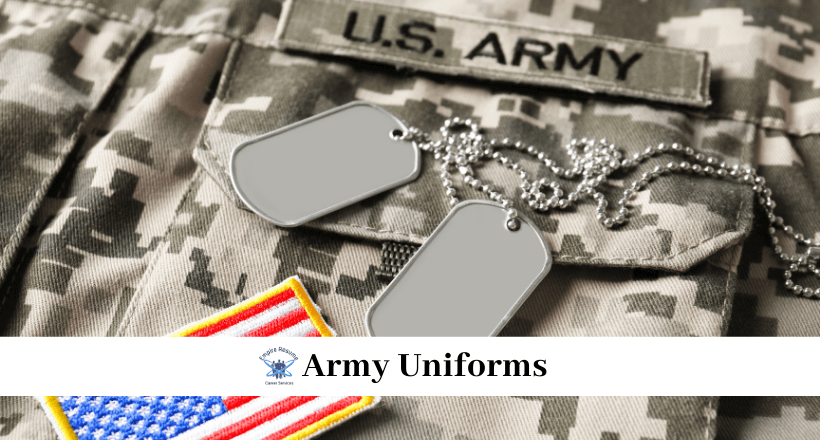 According to Army officials, it improves functionality and performance of the combat uniform as it blends in well with natural environments.

The Army Greens will be the everyday business-wear uniform for all Soldiers.

The AGSU includes a dark olive coat with belted waist, trousers, khaki shirt, olive tie, and brown shoes for men and women, with women having the option to wear a skirt and pumps.

The mandatory AGSU wear date for all Soldiers is October 1, 2027. Check out the AGSU wear and appearance guide.

Learn more about Army uniforms at the official Army website . 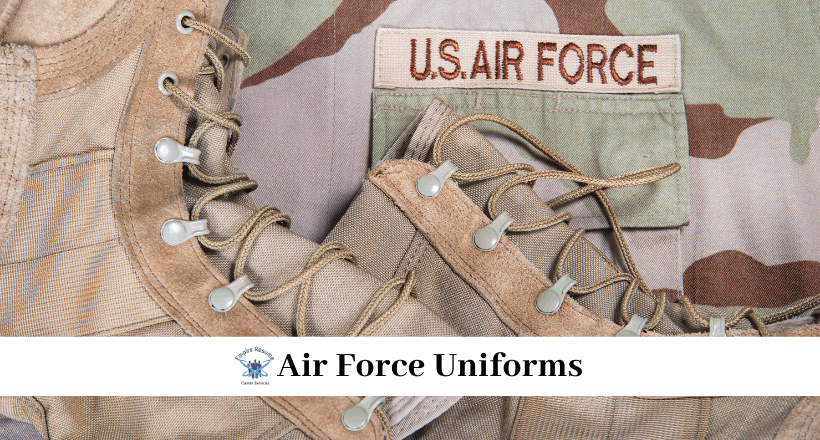 Upon feedback from Airmen for a better battle-tested uniform, the Air Force is transitioning to the six color, Operational Camouflage Pattern (OCP) uniform on April 1, 2021.

Airmen wear a light blue long or short sleeved shirt, and tie or tie tab for women along with a belt with a service cap or flight cap.

You may see silver badges and medals on the left side.

Air Force officers have a silver metallic stripe on the lower sleeve of the jacket and shoulder boards for their rank.

Hats and nametags are not worn with the Air Force Mess Dress Uniform.

Learn more about Air Force uniforms at the official website . Cammies come in brown, green, tan, and gray camo pattern. The white and gray colored cammies are for cold weather conditions, while the brown is for the desert.

The patterns use the Marine Pattern (MARPAT) design, consisting of small rectangular pixels that offer better camouflage in natural environments.

It is the only uniform in the U.S. military designated to include the red, white, and blue colors of the American flag.

This uniform represents Marine Corps values and dates back to the American Revolution. The Marine Dress Blues consists of a black dress coat with red trim and gold buttons, white belt with the eagle, globe and anchor buckle, white cap, white gloves, and black dress shoes.

Learn more about the Marine Corps uniforms at the official website . The Navy has been on the hunt for new flame-resistant uniforms since the old blue camouflage ones were banned from ships after tests found them to be combustible, according to an article in the Navy Times.

New uniforms will come in several types and different colors – blue for enlisted and khaki for officer members.

The white or Blue Dinner Dress is the most formal of all and is for black-tie events. Dinner dress features a short mess jacket with black bow tie and tie tab for women and gold cummerbund.

Ceremonial dress is reserved for occasions of state, official visits, and other ceremonial participations.

Learn about the Navy uniforms at the official website . In November 2019, the Navy announced development of the Next Generation Coast Guard Utility Uniform (CGU) to replace the ODUs.

The dinner dress blue and dinner dress white is the same as the dress blue, indicated above. These are very similar to the Navy’s uniforms with Coast Guard buttons.

Learn more about the Coast Guard uniforms at the official website . The Space Force also authorized the Airman Battle Uniform as another combat utility uniform and is scheduled to be phased out in 2021.

Learn more about the Space Force and its uniforms at the official website .

Military uniforms are an important part of military culture, customs, and history. These uniforms require a certain standard of conduct and etiquette service members must acknowledge when in uniform.

Uniform code is important in the military. Below are some uniform etiquette do’s and don’ts for service members:

Cover or hats are not to be worn indoors and should be worn outdoors in most circumstances. Service members will not show PDA or public displays of affection while in uniform. Handholding, smooching, and hugging is generally not allowed.

However, moderate hugs and kisses are acceptable during deployments and homecomings.

Here’s some important rules for how to keep service members in regulations regarding their hands:

Walking in uniform is not like walking in civilian clothing. Service members must pay attention to the following: Retirees and Veteran Use of Uniform

Research suggests that retirees, who served 20 years or more in the military, can wear their uniforms. Veterans who did not accumulate 20 years of service may wear the uniform on occasions that are centered around family events and military service.

For more information, check out military uniform rules for retirees and veterans.

Did we miss any details about military dress etiquette? Let us know in the comments below! New Methods in Recruiting for the Military