You recently made the decision to join the U.S. Armed Forces, but you worry that your body art is a no-no for the military’s dress, appearance, and uniform standards. Remember when tattoos were mainly associated with bikers and gangs? Whether you have a tattoo as a lifestyle choice or part of fashionably expressing yourself, those days are long gone.

Like many people, you may think the military has a no tattoo policy. However, over the years, the military, like the rest of corporate America, has a wider acceptance of tattoos.

Depending on where the tattoo is on your body, it may or may not be an issue for the branch you choose. But no need to fret. Your friends at Empire Resume conducted research on ink coverings in the military for you. We’ll show you what’s acceptable, what’s a no-go, and discuss the military tattoo policy for each branch of the military.

The 25 Percent Rule is out the Door

Because of the change in times and shift into a modern, more accepting world, now is a great time to go into the military if you have tattoos. Before recent changes took place, military members were restricted by the “25 percent rule.”

The “25 percent rule” meant that military members were not allowed to have tattoos that covered more than 25 percent of the body parts that show up in uniform. This was a disadvantage of going into the military for some people.

Today, authorized tattoos are no longer bound by this rule.

Let’s take a look at the tattoo policies for the Air Force, Army, Navy, Marines, Coast Guard, and Space Force. 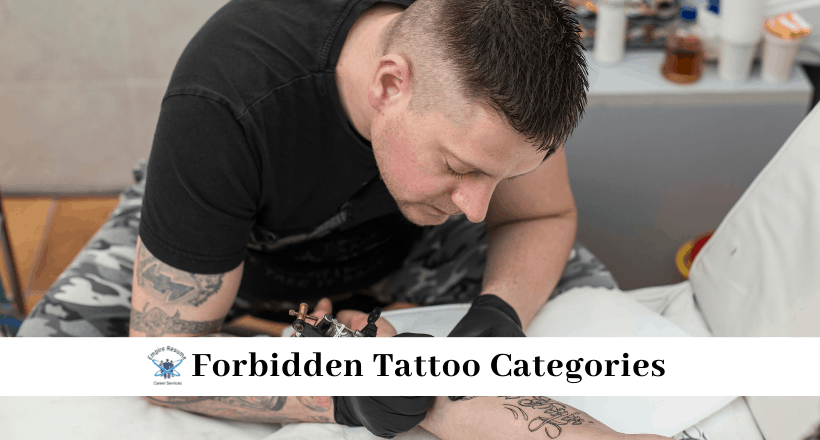 Before we begin, let’s see what each branch of the military has in common. It is important to note that all branches forbid the following tattoos:

These types of tattoos can put one’s dreams of becoming a member of the U.S. Armed Forces in the rear-view mirror. According to the Marine Corps Times, in 2016, a man was unable to join the Marines because of his Confederate flag tattoo.

If you are considering joining the military, and have tattoos, you should take time to become familiar with your respective branch’s policies by reviewing the regulations and talking to your recruiter.

After reviewing the below regulations, you may notice the Air Force, Army and Navy have fairly similar tattoo policies. The Marine Corps is the strictest among all the branches, giving almost no leeway.

According to Army Regulations, the terms tattoo and brand are interchangeable.

In the Army, there are no limits as to how many tattoos, and the size of those tattoos, a Soldier can have on the arms, legs, chest, and torso.

Soldiers may have one ring tattoo on each hand, pretty much where you’d wear a ring.

Soldiers are subject to an annual check by commanders to ensure Soldiers are not wearing the forbidden tattoos listed above.

Additionally, Soldiers may not cover tattoos or brands with bandages or make up to comply with the tattoo policy.

These policies don’t just apply to enlisted personnel. Officers and Warrant Officers are also restricted to this same policy, too.

For detailed information on the Army’s tattoo policy, review Army Regulation 670-1, Wear and Appearance of Army Uniforms and Insignia.

The Air Force is pretty lax when it comes to servicemembers with tattoos. Airmen have no restrictions as to the tattoo size.

The following tattoos are allowed:

You will notice, the Air Force is currently the only branch that allows feet tattoos.

As far as tattoo don’ts in the Air Force, just like other branches, there cannot be any tattoos on your face, neck, head, lips, or eyelids.

Be sure to keep up with the latest on the Air Force tattoo policy as policies are always subject to change.

The Navy’s current regulations allows Sailors to have the following:

Below are tattoo don’ts in the Navy.

While the Navy is generous, it also has a strict policy regarding the content of tattoos, such as the forbidden tattoos listed above. You cannot have any tattoos on your head or scalp, and nothing on the actual ear itself.

Again, a neck tattoo cannot exceed the height/width dimensions of 1 inch. In some cases, a neck tattoo that exceeds the maximum 1-inch x 1-inch dimension might be considered by the Navy recruiting commander. But this tattoo must be located on the back of the neck, and not be touching the hairline or reaching behind the ears.

While the Marines have a conservative tattoo policy, they realize that times are changing. So, they are slowly loosening the reins to accommodate people with ink work.

Marines can have tattoos anywhere on their chest, back, torso, upper thighs, groin area, and upper arms.

Under a physical training (PT) uniform (crew-neck t-shirt and shorts), a Marine can have unlimited tattoos of all shapes, sizes, and colors. But outside of the PT uniform (where the uniform does not cover the body), a Marine is permitted up to four (4) tattoos.

Also, these four tattoos must adhere by the following standards:

The Marine Corps does not allow full-sleeve or half-sleeve tattoos if they can be seen visually while the Marine wears his or her PT uniform.

Sleeves are defined as full covering of the skin by tattoo ink and are located on the arms or legs.

In addition, tattoos are prohibited on the following locations:

If you’re questioning what the head or neck means as a Marine, the Marine Corps spells it out clearly in its Bulletin:

According to Stars and Stripes, the Marines recently reported that Marines no longer have to submit a 360-degree photo of themselves in their PT uniform to extend their contracts, to prove they are compliant with the Marine Corps tattoo policy.

In the Coast Guard, you can have full sleeve and half-sleeve tattoos, full back and chest tattoos, and tattoos elsewhere on your body, including your legs.

Members of the Coast Guard aren’t restricted at all when it comes to tattoo size or percentage of coverage. However, any ‘branding’ can’t be larger than a 4-inch by 4-inch area.

As far as don’ts, the Coast Guard also prohibits the tattoos listed above. Other than that, you have free rein to use your body as a canvas.

For more details on the Coast Guard’s policy on tattoos, review its memo on uniform regulations and visit its website.

As of the writing of this article, we were unable to locate a tattoo policy for the U.S. Space Force, the sixth and newest branch of the military.

Even though we found guidance on Space Force uniforms and insignia, we advise you to speak with a recruiter and become familiar with the Air Force tattoo policy as the Space Force is situated within the Air Force.

One type of tattoos that may confuse some people are cosmetics, like permanent eyeliner or eyebrows.

These are currently allowed in all branches. Just make sure they are natural-looking in color and shape to adhere to the regulations pertaining to face tattoos.

The team at Empire Resume hopes this information about tattoo policies in the military has been helpful. We’re always here to help with your career planning needs and deliver results, guaranteed!