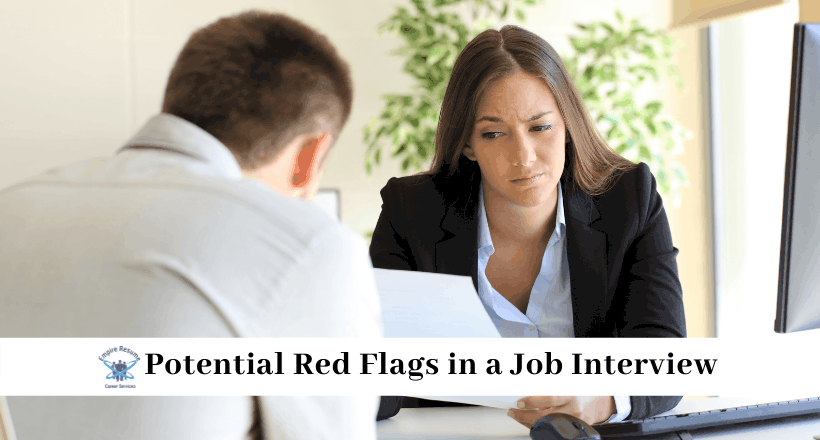 A job interview is often like a first date: Everyone is on their best behavior.

Interviews are a two-way street, and both the candidate and the hiring manager try to discern whether or not it’s the right fit.

You can never truly know whether the company has your dream job, just like the hiring manager can’t know if you’re the perfect candidate. But, if you pay close attention, there are red flags to watch out for.

As a job candidate, you’ll want to keep an eye on signs that the company could be a potentially toxic employer – and the position could be a bad job.

At the same time, employers will watch you closely, too, picking up on subtle signs that you may not be a good hire.

Empire Resume will delve into potential red flags in a job interview for both candidates and employers, letting you know things to look out for in employers and the types of signs you don’t want to give.

How to Avoid a Bad Employer

Each job interview you take is a glimpse at a company’s culture. How you’re treated during the interview is usually indicative of what the job will be like.

Some hiring managers may unintentionally mislead candidates, as they’re oblivious to some problems at their companies. Other managers may be more deliberate, knowing they shouldn’t bad-mouth their employer.

Either way, if you pay close enough attention, there may be potential red flags you’re interviewing with a bad employer. It’s vital to never over-rely on what the hiring manager say about themselves.

Hiring managers can have blind spots and also bend the truth. Because of this, it’s wise to seek out additional information about the company and its culture.

One way to do this is by talking to other employees. If the company is good, they’ll be more than happy to let you speak with current employees.

Talking with potential co-workers is a great way to get a feel for how engaged they are and whether they enjoy working there. You can also reach out to contacts on LinkedIn and look for people who have worked for the company before. 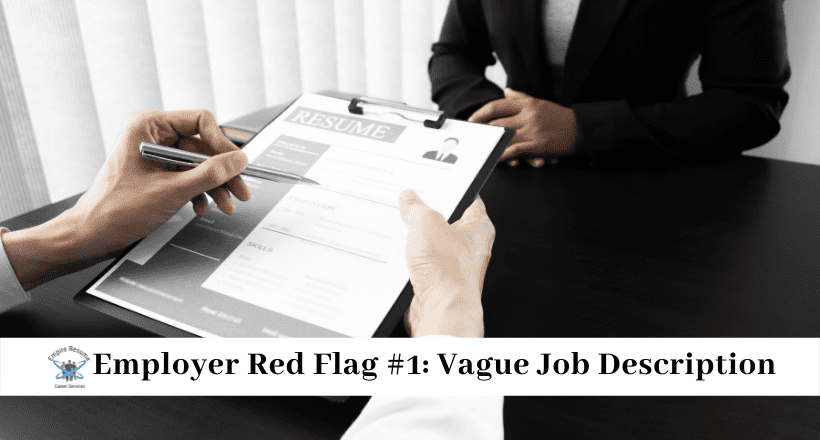 Vague job descriptions can be a sign the employer doesn’t have clear expectations for the position.

This can be a big problem because if you take the offer, you won’t be set up for success, and you’ll likely often feel confused and frustrated.

If the job description is vague, ask the hiring manager for clarification – and pay attention to how they respond. If they can’t give a clear answer, it’s a bad sign.

Of course, some jobs are new positions, and companies are looking for someone to carve out a path. But typically, the vaguer it is, the bigger the red flag that you’ll be disappointed at the job.

As we mentioned, it’s wise to talk to current employees when interviewing at a company. Not only can they fill you in on what the company’s like, but they can also be a barometer of how healthy the workplace culture is.

Current employees probably won’t be very candid or overshare, especially if there are complaints or negativity. But pay attention to body language and how enthusiastic they are. If they seem unhappy, cynical, or fearful, it’s a huge red flag the company has a toxic culture.

Talking about salary and benefits is tricky, and you’ll want to ensure you do it at the appropriate time. It can be a stressful part of the interview process, which is usually at the very end.

Great employers expect you to negotiate for more money and benefits because they know talented candidates want to make what they think they’re worth. And the conversation should feel like a two-way street.

So, beware of employers who are rigid and inflexible during salary negotiations. This is often a red flag of an antiquated workplace culture and definitely not a good sign that the employer cares for its workers.

Some companies have very detailed and rigorous interviewing processes. They consist of multiple interviews and even tests and assessments.

A comprehensive interviewing process is usually a good sign. It shows the employer cares about the new role and wants to do its best.

On the flip side, if the interviewing process seems weirdly fast and too easy, it’s a definite red flag that something’s not right.

If the company isn’t taking the interview seriously, they’re showing they don’t take their jobs all that seriously, either. And that’s not a company you want to work for!

Glassdoor reviews from current and former employees should always be taken with a grain of salt. No company is perfect, and there will always be some negative reviews from disgruntled employees.

However, if there’s an overwhelming amount of negativity about the company on Glassdoor, it’s a bad sign. It’s also a red flag if the negative reviews all bring up the same issues. It means there could be some underlying problems.

Lastly, pay attention to batches of positive reviews that all show up around the same time. Companies often do this to boost their ratings, asking employees directly to write them.

If a company is good enough, they won’t need to beg employees for positive reviews – they’d have a good rating already.

Hiring great employees is vital for every business, and this is especially the case for small companies with few employees.

Bad hires end up costing a company big money. According to a recent CareerBuilder survey, 75% of companies said a bad hire can lead to an average of $14,900 in wasted money.

Hiring the wrong job candidate can have disastrous results, so the stakes are high for hiring managers during interviews. Just like you’re watching them, employers will be looking for red flags that you’re not a good fit.

Try your best to make a good impression during the interviewing process by always being prepared, punctual, professionally dressed, and friendly.

Some things will be out of your control, but there are potential red flags employers will look for that you’ll want to avoid.

Employers don’t expect you to like all your previous jobs. Everyone has complaints about work and bosses – it’s normal.

But employers do expect you to act professionally and not bad-mouth previous bosses and companies. Doing so is a huge red flag and turn-off.

If you have complaints about past jobs, share the information constructively and never whine or play the victim. Trash-talking on former bosses is a huge sign to hiring managers you’ll be a difficult employee.

Hiring managers are looking for candidates who are excited about the opportunity. So, if you don’t ask thoughtful questions or – worse – no questions at all, it’s a gigantic red flag that you’re not all that interested.

Most job candidates know they should ask questions, so they ask basic and generic ones. Employers will be looking for quality questions and ones that show interest and enthusiasm for the position.

A job interview should be like a conversation. So, listen closely and ask natural follow-up questions that show you really want the job.

Candidate Red Flag #3: Too Focused on Salary and Benefits

Salary and benefits are important, but there’s a time and place to discuss them. Usually, it’s best not to bring it up until later on in the interview process.

Employers are looking for candidates who are excited about the job – and not just because of the money and benefits offered. You want to show you have something to offer the company and are genuinely interested in bringing value to their organization.

Go into an interview with the expectation you’ll be asked to explain previous work and the impacts you’ve made. Ideally, you should have a good idea of how you’ll want to phrase it and tie it in with your career path.

Employers are wary of candidates who can’t fully explain what they’ve done at previous jobs. It gives the impression you weren’t fully invested in your last job, you didn’t learn much, or even that you slacked off.

This is a huge red flag for employers – possibly the biggest.

If you’re excited about the opportunity, you should at least do basic preparation for the interview like researching the company, coming up with a list of good questions, bringing your resume, and being on time.

Ideally, you should go above and beyond those things. But hiring managers will be very wary if you can’t meet those basic requirements.

Taking a new job could end up being a multi-year commitment, so do your due diligence. Beware of red flags during an interview, and remember the hiring manager will be looking for them, too.

Also, trust your gut during the interview process. Even if you can’t quite identify it, it’s a good idea to trust that instinct if something feels wrong.

Be discerning during interviews and take your time. If you feel like you have to convince yourself to take the job, it’s likely not a good fit, and, even worse, it could end up being a bad company.

Look no further than Empire Resume if you’re looking for expert professional resume writers. We can help you craft an excellent resume that’ll generate results and get you the interviews and job you want.

Signs of a Toxic Company Culture While Interviewing

Should I Interview for a Job I Don’t Want?

How to Get an Interview in 30 Days