Reapplying for Your Job 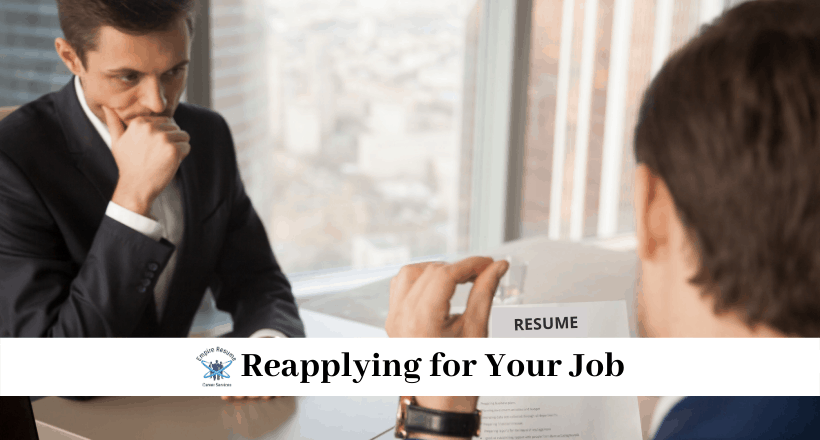 The U.S. and global economy are still in the grips of a recession that has caused mass layoffs and furloughs. The COVID-19 pandemic and subsequent lockdowns triggered the historic downturn.

The economy has slowly recovered since earlier this year. One effect of all this turmoil is that some employers are asking workers to reapply for jobs they were furloughed or laid off from in the spring.

Companies asking workers to reapply for their jobs is nothing new. Businesses sometimes do this after a merger or acquisition or during restructuring of the company. In 2020, employees reapplying to their jobs is more likely caused by the massive layoffs that happened when the pandemic started.

Being asked to reapply for a job can be very discouraging. Workers who’ve been loyal to a company for many years may feel they should get first dibs on the position they once had. Some U.S. cities are trying to pass legislation that would make that happen. These so-called “Right to Recall” ordinances have been passed in Los Angeles, San Diego, and Oakland. Similar laws have been proposed in Providence, Rhode Island, and Baltimore, Maryland.

While these laws may help some workers, others may not be so lucky. Challenging economic conditions are causing businesses to scale back and, if you’re asked to reapply for a job, there’s no guarantee you’ll get it.

Empire Resume researched the practice of reapplying for a job and will let you know why companies do it and how to handle it as an employee and job seeker.

Why Companies Ask Workers to Reapply 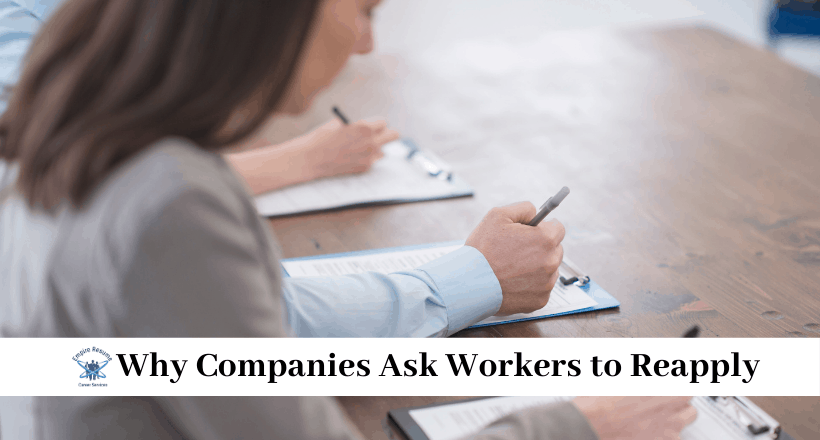 Workers may be asked to reapply to their jobs for many different reasons. Some of these reasons include company mergers or acquisitions, if the company is downsizing or restructuring, or if layoffs are planned and there are a limited number of positions that’ll remain.

Companies restructure for several reasons, as well. Both successful and failing companies do so, primarily to breathe new life into the business and regain their financial footing.

When a company merges with another company or restructures, the workforce is usually a target of cuts. Companies will lay off employees – sometimes entire departments – and eliminate money-losing divisions or products.

If your company is going through this process, they may ask you to reapply for your job. This strategy has advantages for the company, allowing it to keep its most qualified employees and hire other highly skilled workers.

Another advantage of asking workers to reapply is it helps companies avoid discrimination claims. The company asks everyone to reapply, and, in doing so, it can prevent claims it retained some employees and let others go for discriminatory reasons.

Mergers, acquisitions, and restructuring tend to ebb and flow, and they usually happen most often during poor economic conditions. Business mergers and acquisitions are also most common in the tech, healthcare, retail, and financial industries.

For example, in the tech industry, many small- and medium-sized companies today find it hard to compete with giant corporations like Google, Amazon, and Facebook. Therefore, it’s sometimes better for these smaller firms to be bought out by one of these tech behemoths and reap in a massive payday.

The Effect of the Recession

The pandemic triggered a recession in the U.S. economy in February, as economic activity contracted by 5%, according to federal statistics. The impact of COVID-19 on the economy has dragged on throughout 2020.

The U.S. unemployment rate skyrocketed to 14.7% in April but has since steadily lowered. In August, the rate was 8.4%. Some employers continue to shed thousands of jobs. For example, large companies like Walt Disney Co. and Allstate Corp. announced enormous layoffs in September.

Other companies are faring better and ramping hiring back up. For some of those employers, they’re asking workers they laid off in the spring to reapply. Whether you agree with the practice or not, some companies won’t give first dibs on workers asking for their old jobs back.

Reapplying may happen because of this current recession or because of a company merger. Either way, it’s smart to be prepared if this ever happens in your career.

It’s understandable to feel upset and angry if you’ve been asked to reapply for a position you’re either currently holding or have had before. But career experts recommend not showing those emotions to your employer.

When a company restructures, it’ll retain workers who have a positive attitude and won’t be detrimental to team morale. This can feel unfair, as the company may even ask you to take a pay cut. Either way, if you want to stay with the company in the future, try not to publicly express your frustration.

Empire Resume suggests sharing your feelings in private. Vent to friends, your partner, or a counselor. It’s not advisable to vent to co-workers at the current company – your complaints could easily make their way through the grapevine.

If you plan on reapplying, don’t assume you’ll get the job. After a company restructures, there are usually a limited number of openings. You might not land the position even if you were a high performer.

Keep some things in mind when preparing your resume. Build the resume with an emphasis on value you added to the company and highlight your accomplishments.

Quantify the value added to the company whenever you can, using hard numbers and data. Also, write a cover letter that outlines your core strengths and enthusiasm for the new job.

As we noted, the company will want employees that are positive about the firm’s future. So be sure to voice how the new position is attractive, how you’re excited about the opportunity, and why you’re supremely qualified for the role.

You can do several things during the reapplication process that’ll improve your chances of landing the job. First off, put in extra effort to prove you have a strong work ethic and an upbeat attitude. Also, build relationships and connections with people who may eventually supervise you.

During a restructuring process, there will likely be lots of office politics and wrangling. Employees will be competing against each other for a limited number of positions, and some people’s fortunes will rise while others fall. It can be an ugly process, so approach it with tact and sensitivity.

When preparing your resume, don’t assume the company knows all about your previous accomplishments. There may be new faces at the firm, and these managers and executives will be evaluating you for the first time. Some of your successes may have also flown under the radar, so be direct about your skills and past achievements.

Should You Stay or Go?

The company may offer you a chance to reapply. But, of course, you don’t have to accept that opportunity. Business restructuring can be messy, and if you can’t get over the hard feelings or things from the past, it may be best to move on.

The advantage of reapplying is that you can move on with your career at your own timing and avoid a gap on your resume. The decision is ultimately yours. The employer may offer an attractive severance package, and you may feel confident you can quickly find another job.

Either way, make sure you leave the employer on good terms. Even if you have hard feelings, don’t voice them publicly. You may need some of these old colleagues as future references.

Not all mergers, acquisitions, and restructuring processes are the same. But it’s essential to know some common things that happen so that you go into the process clear-eyed if you decide to reapply.

When a business restructures, the main goal is to enhance its financial health. As a result, considerations about employees and other “people factors” often take a backseat. Lawyers, executives, and consultants go through the process with a rational and analytical mindset. They’re typically looking at the hard numbers and not considering the human factors as much.

Other common things that happen during restructuring are:

The days of working for the same company your entire career are probably over. Even large and successful corporations can quickly go belly up, as evidenced by some of the bankruptcies we’ve seen during the recession this year.

Being asked to reapply for a job is frustrating. But it’s an opportunity you may not want to pass up. As the economy slowly recovers, there’s uncertainty about how long the recession will last.

Companies typically ask workers to reapply after mergers, acquisitions, and restructuring. These processes can be painful, so be prepared to stay positive, prove your value, and remember there are no guarantees you’ll get your old job back, no matter how unfair it seems.

With so much uncertainty in the business world today, we all must stay on top of our game. Empire Resume suggests revisiting and revising your resume a few times per year – instead of letting it collect dust while you’re comfortably employed.

Contact Empire Resume today at 801-690-4085 or info@empireresume.com and ask about our free resume review. Our experts can write you an excellent resume, cover letter, and LinkedIn profile that’ll help you land your next job.

For more career insights, stay tuned to our blog and read about trending topics.

Working at a Startup Company

Why Work for a Nonprofit