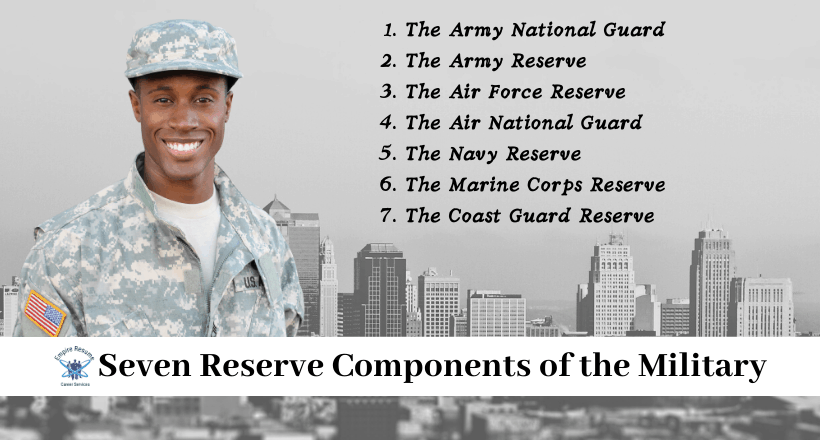 Despite what you may believe, the full-time, active-duty Army, Air Force, Navy, Marine Corps and Coast Guard does not function alone. When considering the structure of military, you may be leaving out a huge piece of the military puzzle, the support factor from its reserve components.

As I like to say, life in the military is a world all on its own. It’s a complex organization, and there’s so much to know about it. That’s why in today’s article, Empire Resume will unpack the layers of support the active-duty military receives so you can better understand how they work together to form the best and most powerful military in the world.

If you love sports, you’ll love what we’re about to say here.

In professional wrestling, specifically a tag-team wrestling match, there comes a time when a wrestler must “tag in” a teammate by the hand to take on an opponent.

In football, baseball, basketball, and other sports, coaches make substitutions to bring other players onto the field or court to replace other players.

Likewise, when the U.S. Armed Forces needs more manpower, the President and Secretary of Defense will “tag in,” substitute, or call up reservists and guard members from the seven reserve components of the military in support of unique missions and operations.

These acts of tagging in, substituting, and calling up others for support is a strategy to keep the mission moving forward. This is why the military has reserve and guard components in place to support the active-duty military.

National Guard and Reserve Components of the Military 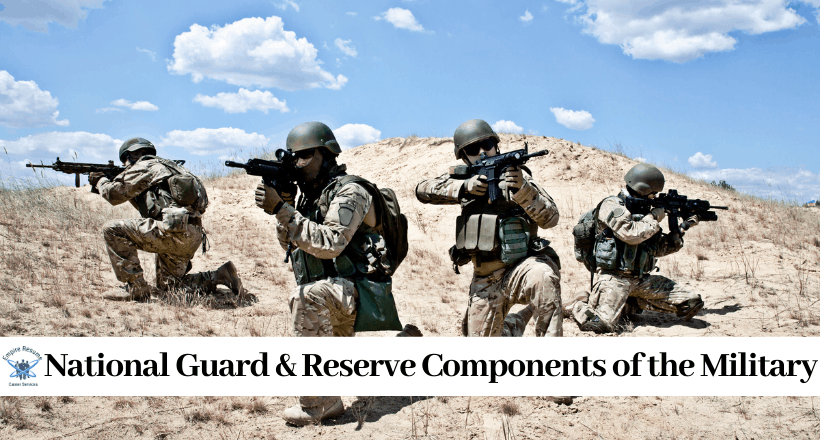 Every branch of the military has at least a reserve or national guard component. Well, except for the sixth and newest branch of the U.S. military established on December 20, 2019, Space Force.

Below are the seven reserve components providing support to the active-duty military of the United States:

As you can see, the Navy, Marines, and Coast Guard do not have national guard units. Each Guard and Reserve has its own unique history and mission, and they offer various ways for people to join the military and serve.

When you join the guard or reserve, expect to work one weekend a month and two to three weeks full time in the summertime.  Also, know that you can get “activated” into full time service for both peacekeeping and wartime missions.

Let’s take a look at each one below:

The Army National Guard is an essential component of the military founded in 1636, making it older than the U.S. Army.

The guard started out as a citizen force organized to protect the community – families and towns from hostile attack. Today, Citizen-Soldiers protect the home front and the nation.

The Army Reserve is the dedicated Federal Reserve Force of the Army.

Today, the Organized Corps is the Army Reserve, which covers more than 20 time zones with more than 200,000 soldiers who is capable, combat-ready, and lethal.

Learn more about the Army Reserves and learn how to join at the official U.S. Army Reserve website.

The Air Force Reserve was formed in 1948 by President Harry S. Truman. Since then, it has been a crucial part of the nation’s defense with the mission to provide forces that Fly, Fight, and Win.

The Air Force Reserve contains 69,000+ members. 80% of those are enlisted and 20 percent are officers. These members perform approximately 20% of the work of the entire Air Force, including traditional and specialized flying missions.

Its HQ is located at Robins Air Force Base, Georgia. To learn more and get details on how to sign up, check out the official website, Air Force Reserve.

With over 140 locations in the U.S., Puerto Rico, Guam, and the Virgin Islands, Air guardsmen and women can serve their communities right in their own backyards. Many Air Force pilots in the Guard fly for commercial airlines during their downtime.

To discover what this extension of the Air Force has to offer, check out its official website, Air National Guard.

According to its official website, the Navy Reserve exists to provide strategic depth and deliver operational capabilities to the Navy and marine Corps team and Joint forces in times of peace and war.

Founded in 1915, the Navy Reserve is the go-to force providing all support to the Navy. These Citizen-Sailors stand ready to move forward in controlling maritime missions and responding to disaster.

Just in case you’re wondering whether a Navy SEAL can be a reservist, the answer is yes! There are two SEAL Navy Reserve teams — SEAL Team 17 and SEAL Team 18.

For more information on the roles and responsibilities of Navy reservists, visit America’s Navy website.

According to the official Marines website, the Marine Corps Reserve is critical to the Nation’s ability to place Marines where they need to be to fight and win battles at home and abroad.

Reserve Marines receive 13 weeks of Marine Corps training, work in the same fields, and meet similar eligibility requirements. They train on a continuous basis one weekend every month and then two weeks per year.

This provides the outlet to also take on a civilian career or pursue their education.

Since they receive the same training as their full-time, active-duty brothers and sisters, they are always ready  to supplement active-duty forces when needed.

To learn more, check out the Marine Corps Reserve.

Founded in 1941, the Coast Guard Reserve has been a vital element of the Coast Guard’s ability to successfully execute missions for governing the seas with boat operations, contingency planning, and law enforcement.

More than 7,000 reservists are “Always Ready” to lace up their boots and answer the call across the water whether at home or overseas.

To learn more and discover how to join, check out the official Coast Guard Reserve website.

Differences Between Guard and Reserve

We now that that guard and reserve members work part time or solely on weekends once a month. But what about the differences between the two?

A fun fact to remember for your next trivia game is the primary difference between the guard and reserve units:

However, the President can call on them at a moment’s notice as well, giving Guard members two missions — state and federal.

They are primarily used for disaster relief and protecting U.S. territory. For example, the D.C. National Guard is currently responding to the protest of the 2020 election results.

Take some time to search for the state national guard in your area. Here, in Utah, the Utah National Guard was founded in 1894 with a mission of providing mission-ready forces to assist state and federal agencies in times of emergency or war.

On the flip side, Reservists are not called upon to respond to disasters like floods or hurricanes.

Although this is the difference between the guard and reserve, it is important to note that both elements of the military can be called into full-time active service to defend the nation in overseas or domestic incidents.

By law, Title 10 of the United States Code, each reservist and guard member is placed in a reserve training category – the Ready Reserve, the Retired Reserve, and the Standby Reserve.

The Ready Reserve is a DoD program that holds a trained group of service members than can be called to active duty when the need occurs. They are contracted to serve in this capacity for a certain period of time and must be prepared to mobilize at any time.

Within the ready reserve, you’ll find the Selected Reserve, the Individual Ready Reserve (IRR), and the Inactive National Guard.

Selective Reserve members are considered in active status and operate their units on a day-to-day basis in training or administrative positions.

Individual Ready Reserve (IRR) members are not in active status. This category is composed of former active duty or reserve members. If you’re IRR, you don’t receive pay and you don’t participate in functions like drills and annual trainings or any military activities, unless you’re activated by the President in the Presidential Reserve Callup Authority.

Sometimes you may be required to attend “muster duty”, where you’re expected to perform at least two-hours of work and are paid according to the Muster Duty Allowance (MDA) Rates.

After a career in active or reserve duty, members are placed in the Retired Reserve category, also known as the gray area.

This is the period where a member is no longer training or attending drill weekends, but not yet receiving retirement pay.

The Army Reserve Retirement Service Office says, “Retirement is a process, not an event,” because there are several steps to qualifying for military retirement. Learn more about how to transfer to retired reserve at the Army Reserve website.

Standby Reserve members are not members of the Ready Reserve, but they keep their military affiliation while they serve the government in other capacities.

For example, these standby reservists can be reserve or guard members who are congressmen, top agency officials, and civilians in the defense industry who are crucial to national security.

Active status reservists can participate in training that count towards retirement without pay but may be eligible for promotion.

Inactive status reservists cannot participate in training that count towards retirement and cannot be promoted.  Usually, those who enter this category have some sort of health or hardship reason, but they possess skills that may be of use in the future.

For a standby reservist to be called to active duty, there must not be enough Ready Reservists on tap to do the job. More importantly, it takes an Act of Congress to make this happen.

While guard and reserve members can begin a promising career, receive compensation and pay, the GI Bill for education, along with health care; parts of the job do not qualify for veterans’ benefits.

Unfortunately, although they may train as if they are on active duty, many guard and reserve members do not see the same benefits active-duty service members receive.

But when reservists are called to active duty by The President or Secretary of Defense for military missions, this type of active duty will count toward requirements for veterans’ benefits.

Wrapping Up the Reserve Components of the Military

There you have it, all seven of the reserve components of each military branch. They all provide a unique taste of what it’s really like to be in the military while maintaining a civilian identity. We hope you learned some amazing facts here, because we sure did.

As always, don’t forget to bookmark our military blog for all things on military, veterans, and the military to civilian transition. If you or someone you know is on the job hunt, feel free to reach out to Empire Resume Career Services at 801-690-4085 or info@empireresume.com and ask for a FREE resume review.

Difference Between a Military Officer and Enlisted?