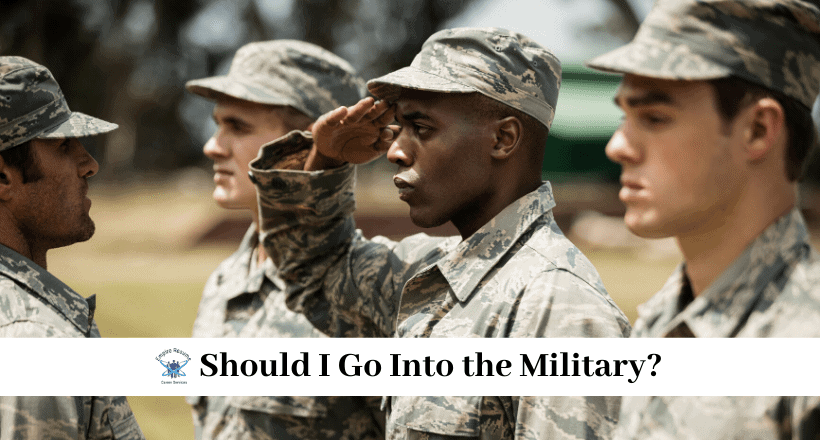 Each day, many people consider going into the U.S. military. Whether an individual chooses and is qualified to join the Army, Air Force, Navy, Marine Corps or Coast Guard, becoming a service member is a life-altering event. Simply ask a veteran who has made the military transition from their respective branch. “Should I go into the military” is a question that is on the hearts and minds of many high schoolers, college graduates, and even those looking for a career change. For this reason, this article by Empire Resume will be beneficial in helping someone decide whether joining military is the right move to make on their chess board of life.

Knowing the various eligibility requirements is an essential element of knowledge for a person deciding to go into the military.

Once an individual who is interested in entering military service can place a check mark next to each of the eligibility requirements, he or she can proceed with whether they’d like to continue the process of joining the military.

Talk to a Veteran

The decision to go into the military is one that must be made alone. Understanding that there are 7 differences between military and civilian life and knowing the eligibility requirements will help to make the decision easier.

We always recommend speaking with veterans to get their input. A veteran’s point of view will provide unique experiences based on the branch of the military in which the veteran served.

It is important to keep in mind that while every veteran’s experience is different, every branch of the military is different too. Another note to consider is the fact that the military has changed throughout the years. A veteran that made the military transition back into the civilian world over 20 years ago will have a different outlook than a veteran that separated from their respective military branch within the past five years.

Finally, individuals must understand that women veterans face hardships that do not apply to their male counterparts. So, hearing about the military experience from a woman’s perspective will be enlightening for other women who are considering becoming a part of our nation’s military force.

Do Not Base the Decision to Join the Military on Myths

Oftentimes, the general public is misinformed about the military. Unfortunately, this leads to those with interest in joining the military to be misled and misguided. No one should join the military based on these myths described in detail below:

While the military offers a good salary, no one is rich. It doesn’t matter if you’re physically fit, emotional and mental fitness is just as important.

Seeing the world is an option when going into the military, but there are many veterans who only served state-side.

Keep in mind, the military does not take troublemakers. The military wants good citizens and finally, if a person does not like school, the military is full of schooling. At the end of the day, these myths are terrible reasons to join the military.

These are just a few of the misconceptions that people have about the military. For more military myths, check out the article entitled 5 Military Myths – Busted by Military.com.

Consider Each Pro and Con of Joining the Military 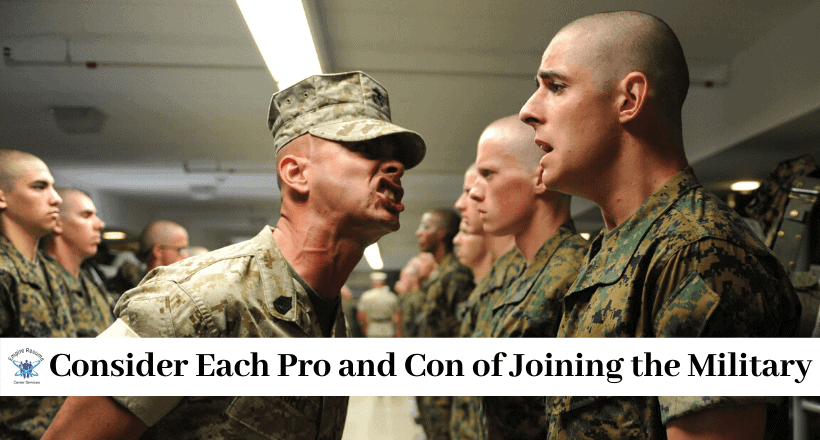 Here, we will list a few pros and cons of going into the military. It is important to consider each pro and con and not take them lightly.

Pros of Joining the Military

The military has several pros that makes it an awesome career option. The pros of going into the military include the following:

Some of the greatest benefits begin once the military member transitions out of the military. For example, the Veterans Affairs helps veterans purchase a home through a VA loan, with no money down.

Now, let’s review the few cons of going into the military.

Cons of Joining the Military

The military has a few cons that should be taken into consideration prior to making the decision to enter military service. The cons of going into the military include the following:

Just because a person has a thought of entering military service, it does not mean they are ready to serve. Joining the military sounds great, right? But every person should consider all options and view the thought from all standpoints prior to going through the process of joining the military.

Once a person is aware of the eligibility requirements, performs research, talks to veterans and considers each pro and con of joining the military, he or she is ready to decide.

If the decision is to go into the military, the next step is to meet with a recruiter to discuss your career options, benefits, answer questions and discuss how joining the military is a life-changing event that can be scary yet challenging and rewarding all at the same time.

Contact Empire Resume for Transitioning Out of the Military

When you complete military service, Empire Resume will be here to pick up where the military transition assistance program left off with preparing veterans for the civilian workforce.

Through our military to civilian resume writing services, we’ve helped thousands of veterans secure the civilian jobs they deserve.  We’ll work with you to make sure your resume and cover letters position you as a marketable candidate and that you have a top-notch LinkedIn profile.

3 Fortune 500 CEOs Who Served in the Military