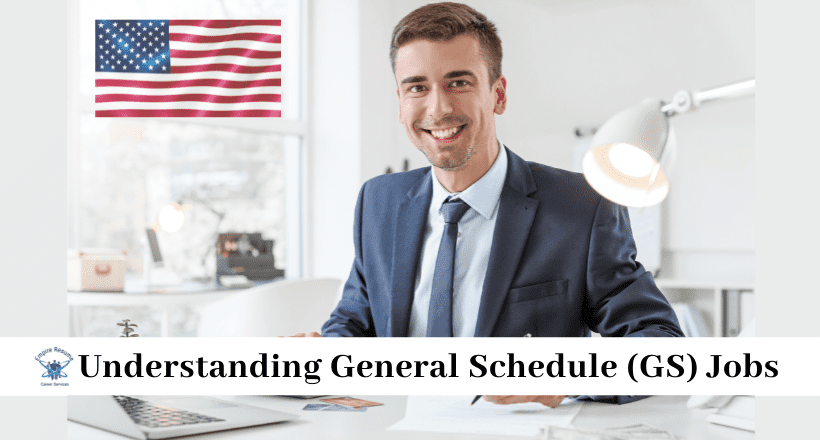 There’s a little-known fact that Veterans seeking federal employment should know. Over 70% of government civilian pay jobs are classified under the General Schedule, also known as GS. This system was enacted in 1949 to standardize positions across federal agencies and ensure the lack of a pay gap with the private sector.

While it doesn’t take rocket science to understand the GS, an Office of Personnel Management (OPM) official states federal job applicants should have clarity on two things – the salary they desire and the skills they have.

The military professional resume writers at Empire Resume have helped thousands of Veterans transition into the civilian workforce and federal employment. So, we know a thing or two about the general schedule and how to apply it to your military experience. Today, you’ll learn the GS equivalent to military rank, how the GS scale works, and alternative government pay scales outside of the GS.

The system consists of 15 grades, from GS-1, the lowest level, to GS-15, the highest level. There are also 10 steps within each grade. The grade level assigned to a position determines the pay level for that job. The grade levels are below:

Determining the federal grade based on your military rank can be a challenge. To determine your civilian grade equivalent based on the GS Pay Scale, remember the two main things you need clarity on:

The conversion table we created below will help you see where you stand:

How the GS Scale Works

Within each GS grade is a series of 10 steps, sometimes called within-grade increases (WGIs), that enable employees to receive in-grade pay raises before they reach promotion potential. Salaries under the GS system have two categories — base pay and a locality pay adjustment. The GS base pay is adjusted to accommodate the cost of living in various geographical locations.

For example, a GS-7 employee working in Austin, Texas, will have a higher total pay than someone at the same level in Birmingham, Alabama, because the cost of living is higher.

Additionally, pay rates outside of the continental United States or OCONUS are generally 10 to 25 percent higher. That’s because the government also offers certain employees a Cost-of-Living Allowance (COLA). If you live and work in Alaska or Hawaii or in the U.S. territories, then, the government will give you a COLA to offset the high cost of living.

The OPM releases locality pay tables each year to assist with the calculation of pay. FederalPay.org has a nifty pay calculator as well. Most government agencies use the GS pay scale. However, over 40 agencies use different pay schedules such as Foreign Service Pay. Below, we’ve provided a list of the primary civilian groups of pay.

These employees are hourly rate workers who receive annual wage adjustments based on a review of comparability pay by wage area. Each wage area pay scale is divided into three classes:

The WG and WL classes of pay rates each have 15 grades with five steps in each, and the WS has 19 grades with 5 steps. Advancement to higher steps is a result of satisfactory job performance and length of service. For more information, access the Federal Wage System.

Under this uniform pay system: An employee under the NAF Personnel System is a person who is employed in and receives compensation from a Non-Appropriated Fund Instrumentality (NAFI). A non-appropriated fund instrumentality (NAFI) is an entity to which Congress has appropriated no funds, and for which it assumes no financial obligation. NAF employment is different from Civil Service federal employment because salaries for NAF employees are not allocated by Congress.

Wondering if you need a resume and cover letter to apply? Check out how to get a job on a military base. The pay for Department of Defense Education Activity (DoDEA) overseas educators and administrators in the Teaching Position (TP) pay plan is based on the pay for similar positions in urban school districts in the United States of 100,000 or more population. An educator’s pay is based upon the educational level of the employee and the number of years of creditable experience.

Title 20, United States Code Sections 901-907 governs the salaries and personnel practices applicable to educators employed overseas by the Department of Defense Dependents Schools (DoDDS) on a school-year basis. The pay and personnel practices are implemented by policies and regulations issued by the DoDEA under the authority and direction of the Secretary of Defense.

The regulations on pay include Department of Defense Directive (DoDD) 1400.13, “Salaries and Personnel Practices Applicable to Teachers and Other Employees of the Department of Defense Dependents Schools” and DS Regulation 5301.4, “Salaries and Personnel Practices Applicable to Principals and Assistant Principals.” These policies and regulations differ considerably from those applicable to other federal civilian employees paid under Title 5 of the U.S. Code or other statutes.

The SES covers most of the managerial, supervisory, and policy positions in the executive branch that are classified above the GS-15 except those that require Senate confirmation.

Now that you know the civilian grade groups of pay, check out the Civilian Geneva Categories and Equivalent Grades table to see how all pay scales stack up each other at DoDI 1000.01 page 15!

Over to You! Convert Your Military Rank to the General Schedule! Once you understand how the rank and grade conversions work, you can begin your how to get a federal job hunt and be walking into the federal agency of your dreams in no time.

We hope you enjoyed today’s article from Empire Resume’s military blog. Join us next week for more information you need to transition into the public sector or private sector successfully.