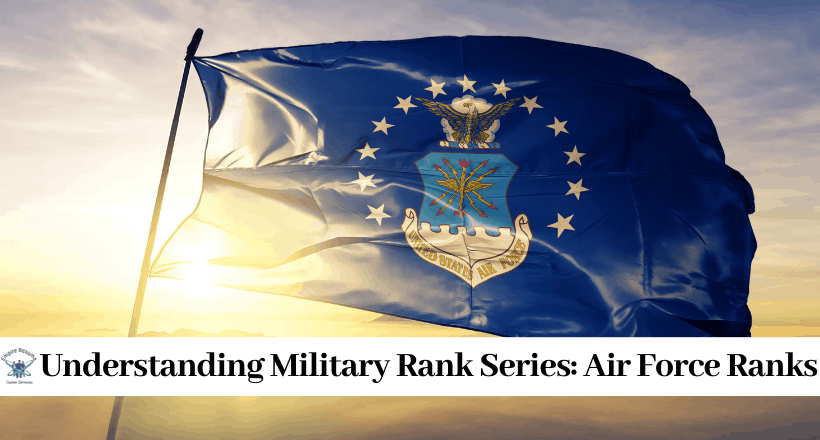 Welcome back to Empire Resume’s six-part mini-series on understanding military rank, where we’re giving you the blueprint to rank for each branch of the military.

Today, we’re sharing the U.S. Air Force ranks and showing how they stack up to their civilian equivalent. Afterwards, we’ll briefly discuss what the Air Force is and what Air Force ranks are. Below is a chart containing each Air Force rank along with accompanying job titles in today’s workforce: 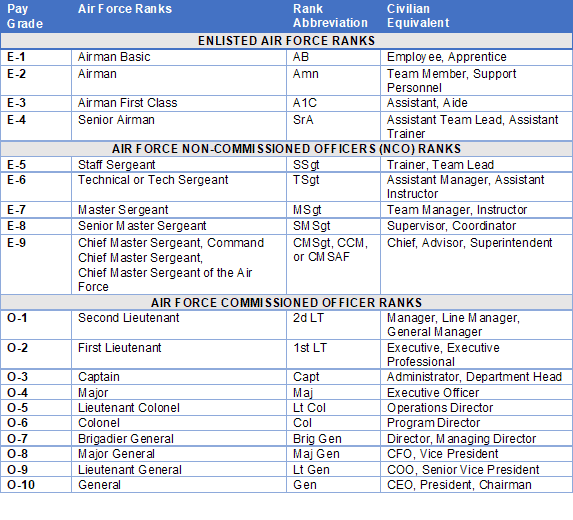 What is the Air Force?

The Air Force is the air service branch of the U.S. Armed Forces comprising the Active-Duty Air Force, Air National Guard, and Reserve components. It is the second youngest military branch, next to the Space Force. Historically, the Air Force was initially formed as part of the U.S. Army to support its ground troops. Air power proved that it was much more capable than supporting ground forces during WWII.

As a result, the Air Force became its own service branch. In April 2021, the Air Force unveiled a new mission statement, “To fly, fight, and win…airpower anytime, anywhere.”

What are Air Force Ranks?

After reviewing the Air Force ranking system with other branches, you’ll notice that this service branch that does not have warrant officers in its rank structure.

Air Force ranks represent one’s job duties and leadership responsibilities. It is how each Airmen advances in his or her career and receives Air Force pay and benefits. According to the Air Force website, Airmen can get more than just a paycheck.

At Empire Resume, it is our hope this quick, easy, and shareable reference will help military veterans change their approach when translating rank into the civilian terms, and that it’ll help civilians better understand what each Air Force rank means and how to apply it to employment opportunities.

What is Veterans’ Preference?

Benefits of the DD-214 in the Job Hunt