What are Zoom Towns? 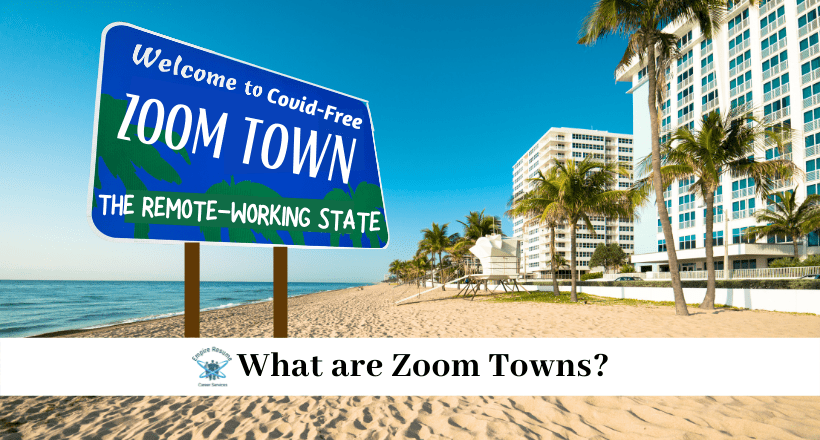 The pandemic has changed many aspects of our lives, especially how we work. Remote work has become more popular than ever. And because of that, it has also influenced where people live.

Throughout the pandemic, some people have moved out of expensive big cities like New York and San Francisco and flocked to smaller towns in the U.S. With remote work, some employees are no longer tied down to location, having to live close to where their office is. This location independence has created a new phenomenon in the work world called “Zoom Towns.”

Zoom Towns can be defined as one of several smaller cities and towns that have seen an influx in population and remote workers moving to them. The phrase is a play on boomtowns, which described American towns that gained a flood of residents after the discovery of commodities like oil or gold.

There are several benefits to moving to a so-called Zoom Town for new remote workers, including being closer to nature and living in a more affordable location. But there are also some drawbacks, such as spotty Internet connection in more rural areas and the possibility remote work arrangements could end.

Empire Resume will delve into Zoom Towns, explain the trend and if it’s worth it to relocate. 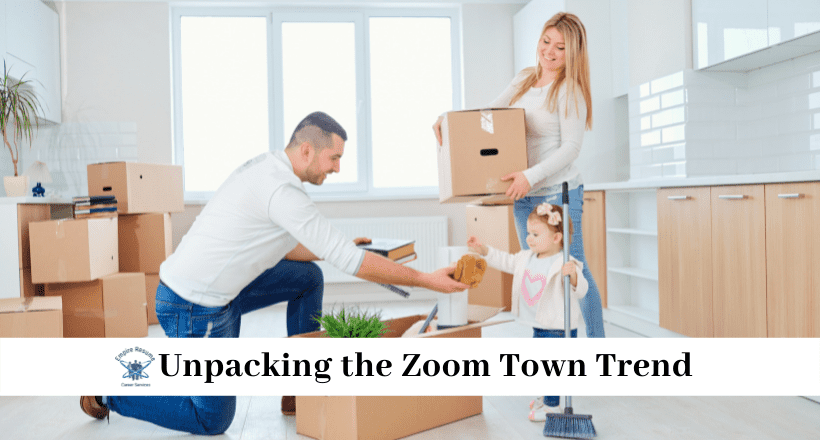 According to one Gallup poll, remote workers went from 10% to around 50% in less than a month at the start of the pandemic. The transition was scary and confusing at first for many people. But once the dust settled, workers and even many companies learned that full-time remote work was feasible and had many benefits, such as increased productivity and worker well-being.

As a result of this shift to remote work, some people questioned why they should remain living in expensive cities if they no longer had to travel to the office. This led to some people moving to so-called Zoom Towns throughout America. Between 14 to 23 million Americans could move because of remote work, primarily out of big cities into smaller towns and surrounding suburbs, according a survey from Upwork. About 15% of more than 3,300 San Francisco Bay Area tech workers left the region because of remote work, according to another survey by the workplace app Blind. Some of these moves were temporary and workers returned back to the big cities they left. But some people left for good.

Common places that people are settling in include The Hamptons in New York; Cape Cod in Massachusetts; Frisco, Texas outside of Dallas; Fremont, California outside of San Francisco; and Bellevue, Washington outside of Seattle. People are moving outside the U.S., too, to places like Somerset, England, and Western Australia. The cost of living in some of America’s most expensive cities like New York is around 40% to 80% higher than the national average, so people can save big money by moving to a small city.

Some of these Zoom Towns are considered vacation destinations, and they saw a significant spike in new residents. For example, Truckee, California, saw a 23% increase in new residents by September 2020, according to Redfin, a real estate brokerage. Meanwhile, large cities like New York, Seattle, Philadelphia, and Chicago saw losses in population.

The trend has mostly been positive, and some towns have embraced it, even offering remote workers money to move. For example, in late 2021, the state of West Virginia announced it would give remote workers $12,000 in cash with no strings attached to move there! West Virginia started the initiative after receiving a $25 million donation from Intuit’s executive chairman.

Benefits of Moving to a Zoom Town

The benefits of moving to a Zoom Town are many. Because these towns are usually more affordable, you can get more space for less money and typically a better apartment or house at a better price. Zoom Towns are also smaller, quieter places with slower lifestyles than living in the big city.

Many Zoom Towns, like Aspen, Colorado, also have an abundance of parks and green space, leading to a healthier lifestyle. You can save money on more than just housing costs, too. With remote work, you no longer have to pay for commuting by car or public transit, and you save on possibly expensive lunches near the office and parking costs. Global Workforce Analytics estimates remote workers can save up to $4,000 annually.

Zoom Towns may also offer you money to move there, as we mentioned before. There’s a long list of U.S. cities and states offering cash incentives for relocations, including Tulsa, Oklahoma; Maine; Vermont; Newton, Iowa; and Hamilton, Ohio. There are also international cities that offer these incentives and work visas, as they have for quite some time.

Some of these incentives are only offered to tech workers, but others are open to any remote employees willing to relocate. The cash incentives and tax breaks are similar to relocation expenses offered by companies. For example, Tulsa, Oklahoma, pays remote workers who move there $10,000, plus access to affordable housing. About 500 people took the offer in 2021, and about three-quarters of them were tech or business services workers.

The increased trend of remote work and Zoom Towns also has benefits for companies. Businesses can reduce their physical real estate footprint without the need for so many workers in the office, thereby saving money. Fewer offices also help the environment because it lowers companies’ carbon footprint and cuts down on the number of workers commuting in gas-polluting cars.

It’s estimated that the average company can save as much as $11,000 per year for each employee who works remotely at least half the time, according to a Future of Work report by HP Megatrends.

Drawbacks of Moving to a Zoom Town

It’s not all roses and sunshine in Zoom Towns, though. There are some drawbacks. Perhaps the biggest one is that once the secret gets out that a town is great to move to, it gets overcrowded with an influx of people. So, just as you were trying to get away from big-city problems like expensive housing and traffic congestion, you may eventually find it in one of these booming locales.

Examples of this have already begun to happen. For instance, in Flathead County, Montana, monthly real estate costs nearly doubled in 2020, and the median home-sale price increased by almost $50,000 in five months. The same thing has happened in the Hamptons in New York, where an influx of new residents and remote workers has driven up housing costs by 25%.

There’s also the possibility that the remote work trend may not last. People expect remote work arrangements to persist, but it’s not guaranteed. So, imagine moving across the country, buying a house, and getting set up in a Zoom Town, and then suddenly your boss wants you back in the office. It would be an awkward situation causing you to either find a new job or move back.

Another potential problem is the lack of strong mobile and internet connection. Unlike big cities like Seattle, many Zoom Towns in rural areas may not have the broadband internet infrastructure to support large amounts of remote workers. This could lead to spotty internet services, which would obviously be a big problem for remote workers relying on technology.

Some Zoom Towns may not also have the convenient amenities that city and metro area dwellers are used to. Grocery stores could be further away, and there are all sorts of problems you may not expect if you’ve never lived in the country or rural area before.

The popularity of remote work and Zoom Towns could significantly affect the work world and many towns nationwide. No longer tethered to an office location, remote workers have more freedom than ever in where they choose to live. This has caused significant population migration to places in America that have long been ignored.

So-called Zoom Towns were already gaining in popularity before the pandemic, as small cities and locales lured remote workers away from big cities with offers of more space and quieter living. But the pandemic has put the trend on steroids and has people moving more than ever.

There are several benefits to moving to a so-called Zoom Town, but make sure you do your research and weigh your options carefully. Zoom Towns get their name from the oil and gold rush boomtowns of the past. And just like boomtowns, these remote-friendly locales can quickly get overrun by people, driving up costs and creating the same types of problems you were trying to avoid in the first place.

Nevertheless, the Zoom Town trend looks likely to continue. Surveys show many companies continue to allow remote work and some companies, such as Airbnb, recently announced employees can work from home permanently. So, if you want to get away from the dizzying lights of the big city and move to a quieter, more peaceful Small Town, USA, it’s more possible than ever.

Stay tuned to Empire Resume’s blog for more helpful insights on careers and employment, including articles like What to Expect When Onboarding, Why Work for a Nonprofit, and Being Overqualified for a Job.

How to Interview for a Remote Position

How to Move Up the Career Ladder in Remote Work