What Do Civilian Hiring Managers Really Think About Military Experience? 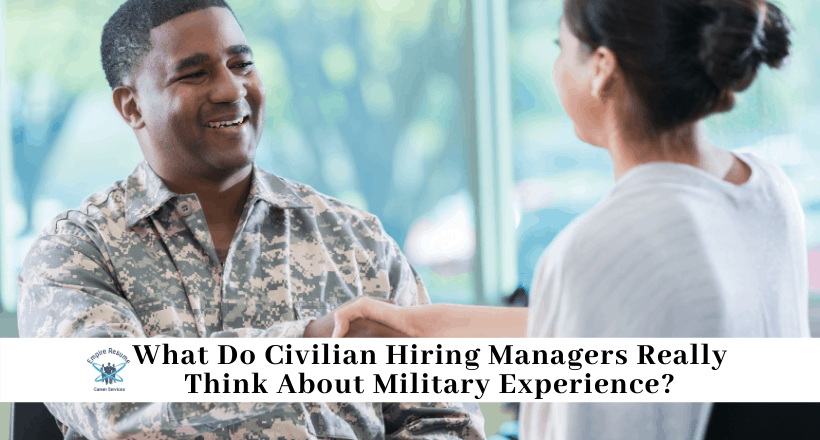 Over the past decade, hiring military veterans has become a widespread effort for many private-sector companies. Many civilian hiring managers recognize and understand the true value of a veteran’s military experience, but the employment status of veterans shows otherwise. Unfortunately, even outside of the Coronavirus pandemic, our hometown heroes are often dismissed for employment opportunities for several reasons.

At Empire Resume, a professional resume writing company, we commit our writing to raising awareness surrounding the latest employment trends and challenges specific to the military-to-civilian transition. Today, we’ll discuss how civilian managers really feel about military experience in the workplace.

A March 18, 2021 News Release from the Bureau of Labor Statistics noted:

The Overlooked Talent of Veterans 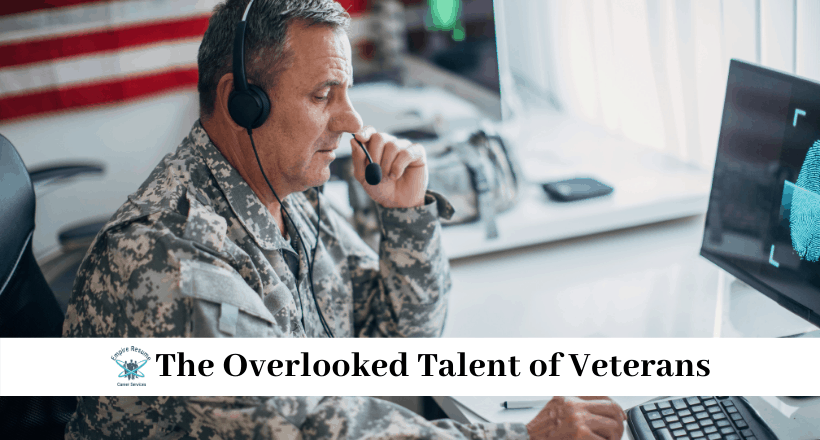 When recruiting veterans, companies can open the door to an untapped pool of talent and significantly impact their bottom line because veterans make good employees, and there are several benefits of hiring veterans.

Facts from the LinkedIn Veteran Opportunity Report shows veterans are far ahead of nonveterans in three areas:

But underemployment poses a big issue for transitioning veterans. Underemployment occurs when a person engages in work that doesn’t make full use of their skills and abilities.

He proclaims, “I invest in veterans not to do them a favor; they are actually doing me a favor, because the qualities they bring to the workforce are invaluable.”

Despite all the positives of having veterans in the workplace, some civilian managers are on the other side of the fence. Below we discuss some of the reasons why employers don’t hire military veterans and what they really think about military experience. 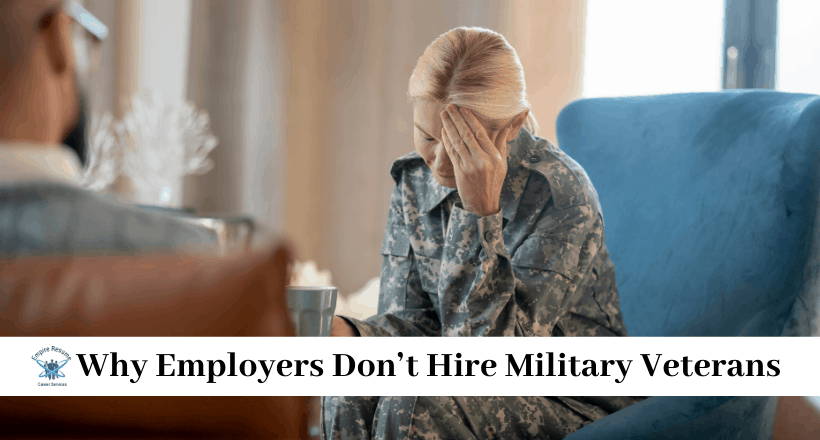 Estimates are that by the year 2023, there will be 3.5 million military veterans in the workforce. Instead of exciting civilian employers, this makes hiring managers and recruiters more reluctant to hire veterans because they don’t understand the military experience.

Below is a quick rundown of some reasons, myths, and misconceptions civilian hiring managers have about military veterans:

An article in Military.com revealed 5 real reasons why companies refuse to hire veterans, from the mouths of HR professionals:

Hiring managers don’t have time to translate the military skills listed on a resume into the civilian world.

Hiring managers believe military veterans just want to walk into a position equivalent to their job in the military. Military veterans are expected to start over and work their way up, with new, civilian experience. 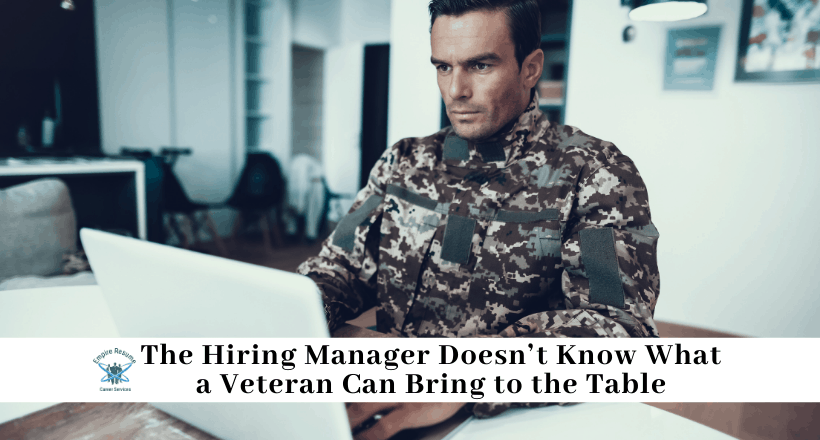 Civilian hiring managers have extreme difficulty understanding the military experience. When looking at a young veteran, civilian HR managers tend to apply negative stereotypes depicted in movies and TV, instead of looking at the whole person.

Veterans try to add every military position, school, and award they’ve earned, which results in a long resume resembling an autobiography, rather than a bird’s eye view of their experience. Resumes should allow a hiring manager to quickly determine whether the veteran is a potential fit.

Hiring managers say veterans need to hone in on what they want to do, jobwise. Interviewers are interested in hearing about veterans as far as employment, not an overwhelming list of their passions. If the veteran is wondering whether the job is really a right fit, the interviewer will pick up on it and feel the same way.

What we see in military movies, accurate or exaggerated, about the military experience and culture give veterans a bad rap when it comes to civilian employment.

Many hiring authorities connect the overall military experience to the cultural depictions of GI Joe and GI Jane, and the tough, yet challenging environment of taking or giving orders. The unique sacrifice and individuality of the military experience based on each person often goes out the window.

Hiring authorities don’t realize that a company’s core values are an aspect of employment that a military veteran can easily relate to and hold dearly in his or her daily walk of life as a civilian employee with military experience.

How Veterans Can Overcome What Managers Think About Military Experience 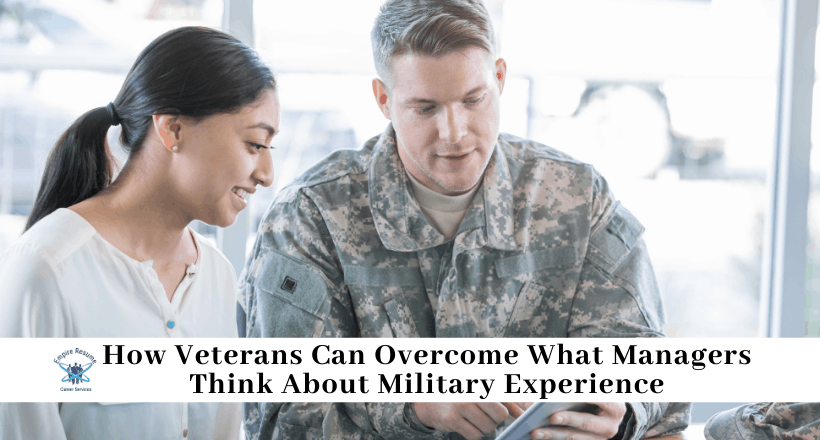 By leveraging their network, starting conversations with other professionals, and strengthening their skills with platforms like Skillbridge, veterans can set themselves up for success in the civilian workforce.

For more information on LinkedIn’s community for veterans and military, visit linkedin.com/military.

The Empire Resume military-to-civilian blog is filled with the latest information relevant to the careers of veterans, and the military lifestyle.

We help transitioning veterans present themselves in the best light for civilian hiring managers with a convincing military-to-civilian resume, a thumb-stopping LinkedIn profile, and a memorable cover letter that’ll put them ahead of other nonveteran candidates. 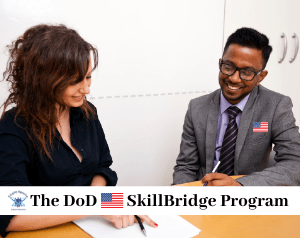 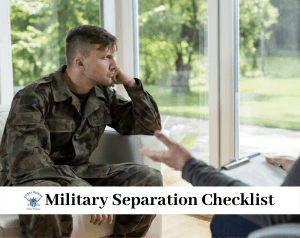 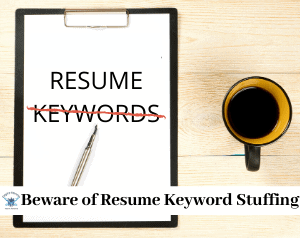