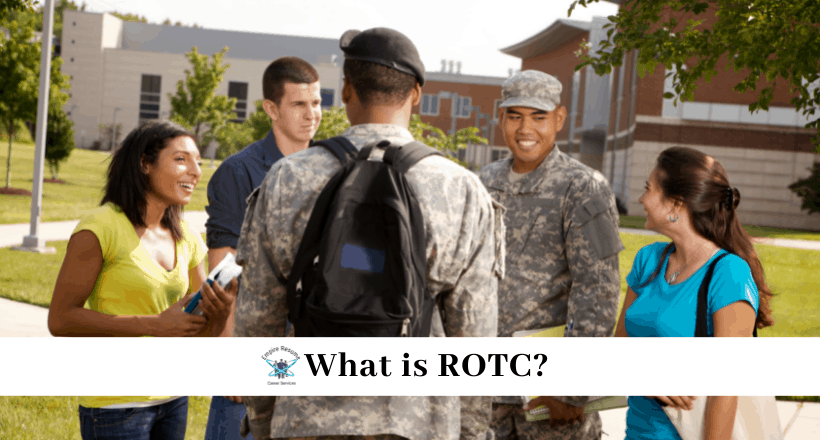 If you’re having a hard time deciding whether to join the military or go to college, why not do both? ROTC may be a viable option.

ROTC, an acronym standing for Reserve Officer Training Corps, is a nationwide, federally funded program, developed to train future commissioned officers of the U.S. Armed Forces. The program is offered at approximately 1,700 colleges and universities across the nation. It affords students the opportunity to study and serve after they complete their degree or participate in the program for a short time without a commitment after college.

Since there’s a lot to learn about the ROTC program, your friends at Empire Resume put together a brief guide to ROTC. We’ll talk about the following:

By the end of this article, you’ll have a great understanding of ROTC and whether it’s a good fit for you.

Even though the Coast Guard does not have an ROTC program, it has a College Student Pre-Commissioning Initiative instead. The Coast Guard’s initiative offers scholarships and a slot at officer candidate school after graduating college.

Click each branch below to learn more about its respective ROTC programs: 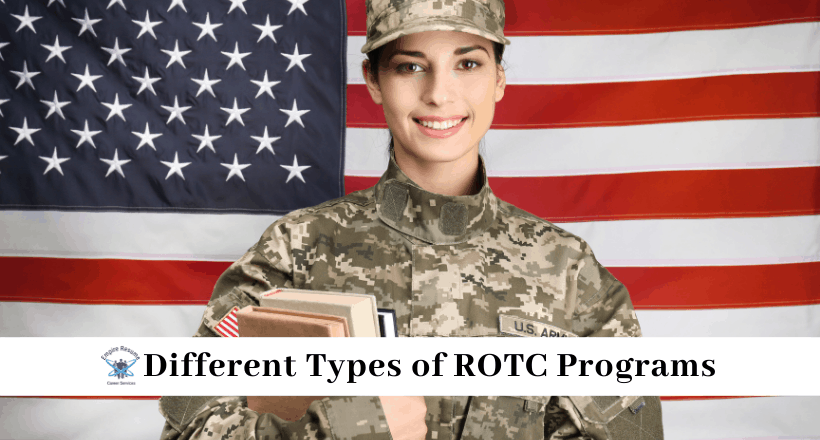 There are three different types of ROTC programs being administered:

The six senior military colleges, also known as military schools, include the following:

These institutions only offer baccalaureate degrees and organize all or some of their students into a corps of cadets under a military discipline. Those participating in the cadet program must attend at least 2 years of ROTC education.

At civilian colleges, the ROTC program is completely voluntary. In civilian ROTC programs, students take ROTC classes and participate in military training, but to a much lesser extent than they would if they attended a senior military college. Additionally, students participating in ROTC programs at civilian universities are still eligible for ROTC scholarships to help pay for their education.

These are military schools that provide junior college education and only offer an associate degree. Here, students can be commissioned as second lieutenants only in the Army Reserve or Army National Guard as graduating sophomores. However, under the Army’s Early Commissioning Program (ECP), they will be required to finish their bachelor’s degree at another institution upon commission and while serving in their reserve or guard units. Learn more about the Army’s ECP Program at Marion Military Institute.

Do the Service Academies Offer ROTC?

By joining the ROTC program, students train as they learn, taking military science courses alongside regular college classes, with the requirement to be commissioned as an officer in the U.S. military upon graduation.

Training in the ROTC program involves discipline, and even the following:

This is all done while taking other courses necessary to graduate college, in addition to living the life as a college student.

When the ROTC program is taken as an elective course, without the military service commitment, a student can join the program for a limited time, typically for three semesters. Short-term participants benefit from physical fitness, leadership and management skills taught in the program.

Now, let’s move on to what you want to hear about — the scholarship money.

Depending on the institution, the ROTC scholarship amount can as much as $100,000+!

Once a student accepts the scholarship, they are committing to four to eight years of military service after graduation.

In addition to the option to have tuition and fees or room and board covered, ROTC cadets also receive a living stipend. The amount varies by branch and class standing. For example, the Army’s living stipend is $420 a month compared to $300-$500 for the U.S. Air Force and $350-$400 for the U.S. Navy, according to the official websites for the ROTC programs. A stipend for books varies by branch and ranges from $750 to $1,200.

Students interested in joining an ROTC program must meet certain standards for academics and physical fitness. To be eligible for a scholarship, students must meet minimum GPA requirements and SAT or ACT scores established by each service branch and be a U.S. citizen between the ages of 17 and 26.

Additionally, depending on the branch, a standardized test or military entrance test may be required to get a scholarship. For example, for the Air Force notes, as an academic standard, that the Air Force Officer Qualification Test or AFOQT is required for all cadets on Air Force ROTC scholarship.

Benefits and Advantages of Joining the ROTC Program

Below are some pros and cons to joining the ROTC program so you can make the best decision for you!

Who doesn’t want some financial assistance for college these days? Having your textbooks, room and board, other fees, and even additional living expenses paid for is a no brainer.

ROTC is an extracurricular activity, much like playing a sport. Students who participant in the ROTC program are held to a higher standard, as they are being trained to join the largest military force in the world.

What many people don’t consider before joining is the training sessions and other events to attend outside of class, even on the weekend. They’ll be expected to wear a military uniform at least one day during the week, maintain the uniform’s condition, pass inspections and attending regular physical training sessions, each week.

The standards for participation in ROTC activities are high. Students should plan to be early to ROTC events, such as physical training. We’re talking 6 a.m. for physical training while other college students are sound asleep in their dorm room.

ROTC programs offer out of this world experiences that will last a lifetime. Think about all the skills you’ll take away — leadership skills, mental agility and stamina, critical thinking skills, problem solving skills, and learning to delegate. Most importantly, you’ll learn how to do all of these under pressure.

You’ll even participate in summer leadership training programs offered by the different ROTC programs. And as you progress through the ROTC program, you’ll have opportunities to use your experience to lead and train other participants.

For some people, making a nearly 10 yearlong commitment is a tough choice. While other students are off to graduate school, their new job, or starting a business of their own, those who commission through the ROTC program will be sent to their new duty station. That’s why it’s important that you decide how the ROTC program will affect your life now and in the future.

JROTC stands for Junior Reserve Officer Training Corps. This federally funded program is similar to ROTC but is reserved for high school students and some middle school students. What really makes JROTC different from ROTC are their respective missions. JROTC is about developing good citizenship, character, and community service. ROTC’s goal is to commission officers in the U.S. military upon graduating college.

Every branch of the military has a JROTC program, including the Space Force! In March 2021, the Air Force Magazine announced that Space Force is getting 10 JROTC units this fall 2021 semester.

What’s Next? Decide if the ROTC Program is for You!

You may have heard this once, but please don’t let money be a motivating factor for joining the ROTC program. ROTC is not a program for the faint of heart. But if you’re serious about it, you’ll come out on the other side successful in your military life and life as a civilian.

Be sure to consider all your options, weigh out the pros and cons we’ve listed here and decide if ROTC is really for you. I hope we’ve answered your questions about ROTC and that this article will help you determine how you should move forward.

While you’re here, go ahead and bookmark Empire Resume’s military-to-civilian blog for the latest military-related topics. We’re always here to help with your career planning needs and deliver results, guaranteed!