Utah’s technology industry has quietly become one of the strongest in the nation in recent years, as Empire Resume has reported. From 2008 to 2018, the industry grew at an average annual rate of nearly 5%. In 2018, Utah tech companies supported one in seven of all jobs in the state.

Much of the industry’s astounding growth in Utah has been concentrated in an area dubbed the “Silicon Slopes.” The name refers to a hub of tech companies in the Salt Lake City area that have slowly been challenging even the mighty Silicon Valley as one of the best places to work as a tech employee in the U.S.

The Silicon Slopes is home to many influential IT, software development, and hardware manufacturing firms, including IM Flash Technologies, EA Sports, eBay, and Adobe Systems. Several of these companies are tech “unicorns” – startups with valuations of more than $1 billion.

To outsiders, it may seem like Utah’s growing tech influence has come out of nowhere. But the state’s presence as a technology hub goes back decades. Utah has partnered with the U.S. government since the 1960s to lay a strong foundation for the state’s tech business environment and infrastructure.

As the Silicon Slopes continues to expand, Utah workers should take notice. Innovative companies and well-paying jobs are available in the Slopes, and Empire Resume will explain the history of Utah’s tech scene, how to get involved, and how to find work in one of the nation’s best places for technology jobs.

The Silicon Slopes is just one example of a growing number of tech communities across the world that are molding their image after Silicon Valley. For example, “Silicon Alley” is a hub of high-tech companies in New York City’s Flatiron district.

Utah’s booming tech scene wasn’t grown overnight. The state’s influence in technology dates to at least the early 1960s when David C. Evans (a Salt Lake City native) worked with the U.S. Department of Defense to help create the internet. In 1969, Evans helped the University of Utah become one of the four original nodes of ARPANET, the technology that laid the foundations for the internet we know today.

In terms of the tech industry, the start in Utah is generally dated to the birth of companies WordPerfect and Novell, Inc., in 1979. Novell was a software development company that, by the early 1990s, controlled 65% of the tech market for network operating systems.

Utah’s second wave of tech companies came in the 1990s with the founding of Omniture, an online marketing and web analytics company. Josh James was the co-founder of Omniture and he sold the company to Utah-based Adobe in 2009 for $1.8 billion.

Josh James has been a driving influence behind the creation of the Silicon Slopes and Utah’s current tech scene, but so has the University of Utah. In 2006, the university reformed its technology licensing system, according to NPR.

After James sold Omniture to Adobe in 2009, venture capitalists took notice and began investing in Utah tech startups. In 2011, venture capital investment spiked 54% from the previous year. James, meanwhile, took much of that capital and reinvested it into other Utah tech companies. As the money flowed, Utah’s tech scene exploded and began to resemble the Silicon Slopes the state has today. 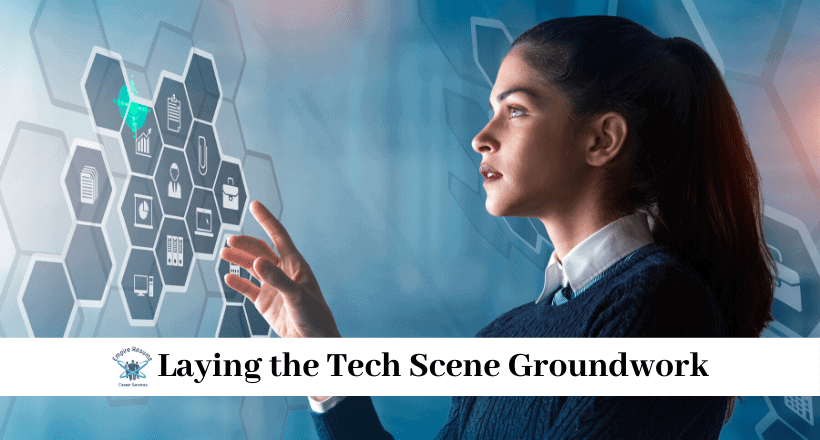 Empire Resume has described a brief sketch of the history of Utah’s tech industry of today, but it’s not the total picture. For instance, Utah’s state government has also been very influential in building the groundwork for the Silicon Slopes.

Governor Michael Leavitt regularly made trips to Silicon Valley in the 1990s while he was in office to lure tech companies to Utah. Leavitt’s influence is one of the primary reasons eBay opened its main customer service center in Utah and Intel brought new research operations to the state.

Utah is often ranked as one of the top five states for business, largely because government, education, businesses, and communities form strong partnerships to grow and entice companies to move to the state.

If you’re a Utah worker looking for a job in the tech industry, the Silicon Slopes website is a good place to start. The nonprofit publishes a magazine and a podcast, and its various media channels reach a unique audience of more than 250,000 people per month. The Slopes website also includes a job board that (as of 2/8/20) includes 116 jobs at Utah tech companies.

Empire Resume has given you a bit of the history of the Silicon Slopes, but what about the companies and jobs in the tech hub? Overall, there were about 212,500 tech jobs in Utah in 2019, which accounted for nearly 6% of all jobs in Utah, according to the Kem C. Gardner Policy Institute. Utah tech jobs also paid an average annual wage of $106,100 in 2019 – compared to the annual average wage of $58,500 for all other Utah occupations.

Some of the biggest and most well-known tech companies in the Silicon Slopes include Adobe, Ancestry.com, Podium, Domo, eBay, and IM Flash. Utah has recently been home to four tech unicorns (startup companies valued at $1 billion): Domo, InsideSales, PluralSight, and Qualtrics. Health Catalyst and Weave became the newest Silicon Slopes companies to garner tech unicorn status in 2019.

All these companies making big deals and all the venture capital pouring into the Silicon Slopes means more opportunities for Utah tech workers. Utah’s tech industry grew by an average of nearly five percent each year in terms of employment from 2008 to 2018, tying it for the fastest-growing industry in the state.

Some of the most in-demand jobs Utah tech jobs today, according to the state’s Department of Workforce Services, include:

The Silicon Slopes Tech Summit is held at the end of January in Salt Lake City and it draws more than 25,000 attendees. The Summit is a display of how vibrant Utah’s tech scene is right now, and it has quickly become one of the largest and most prominent annual tech events in the world.

The biggest news at the Summit this year was the keynote address by Facebook CEO Mark Zuckerberg, who spoke candidly in the rare public appearance about his company and the future of technology and social media. While most of what he said pertained to Facebook and his personal life, Zuckerberg surprised the packed audience when he said, “he wouldn’t build in Silicon Valley right now.”

Zuckerberg pointed out that tech startup communities are now popping up everywhere across the globe, such as Utah’s Silicon Slopes or the many “Silicon” hubs in New York City; Austin, Texas; Atlanta; and even Idaho Falls, Idaho.

The Facebook CEO said he wouldn’t start a company in Silicon Valley today, and encouraged tech entrepreneurs to start companies elsewhere, according to the Deseret News. His comments are good news for Utah’s Silicon Slopes and tech community, which continues to draw further investment in its businesses.

The other big news at this year’s Summit was the announcement that three Utah tech stalwarts (all BYU graduates) are starting a venture capital fund to back emerging Utah tech startups. The Silicon Slopes Venture Capital Fund will continue to build homegrown Utah tech companies and support the Silicon Slopes hub. 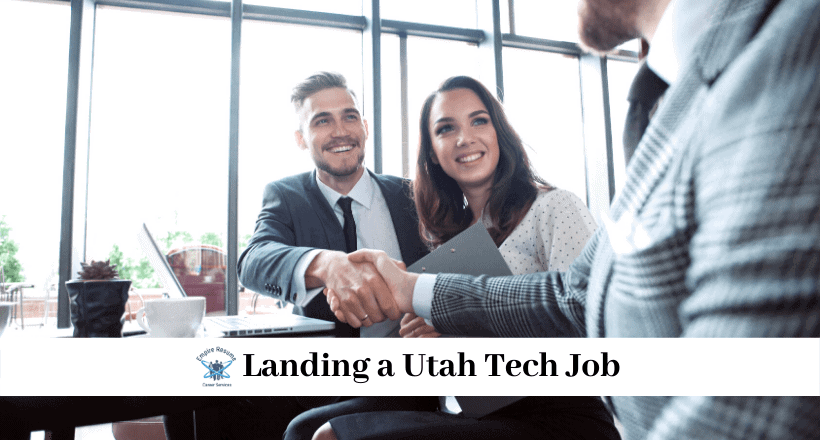 By now, Empire Resume has probably convinced you it’s high time to jump into Utah’s tech industry. You’ll find no shortage of tech jobs in Utah once you start looking. Since January 2018, tech-related job postings in Salt Lake City have risen by about 12%, according to a recent Indeed report.

Salt Lake City tech jobs aren’t just at companies you’d think of as tech companies, either. The Church of Jesus Christ of Latter-day Saints is the No. 1 hirer of tech-related professionals in Salt Lake City, the Indeed report says. This reminds Empire Resume of the recent maxim in the business world that, “All companies today are technology companies.”

Indeed reported that the other top tech-related job hirers in Salt Lake City are:

If you’re looking for a tech job in Utah, there are many ways to break into the field. Technology changes all the time, so make sure you’re keeping up with the latest trends and learning the newest skills. Getting involved with the Silicon Slopes nonprofit is a good start so you can network with other tech pros and stay current about developments in Utah’s tech scene.

Remember the No. 1 rule for many tech companies today is to hire employers who fit with the industry, company, and role. A job interview for a tech position may start with a small-talk question about the latest news on Google or Facebook. This may seem innocuous, but the interviewer is likely testing your knowledge. That’s why it’s important to stay abreast of tech industry news and, in Utah, tech news in the Silicon Slopes area.

For company fit, an interviewer may ask the tried-and-true question, “Why do you want to work here?” The trick for answering this question is to give a knowledgeable answer about the current state of the company, challenges they may face, and how you can help. The best way to give such an answer is to research the company extensively before the interview.

Utah is quickly becoming an economic powerhouse and one of the primary reasons is the state’s booming tech industry. Tech supports nearly one-fifth of Utah’s overall economy, and the tech industry is growing twice as fast as all other industries in the state, according to the Kem C. Gardner Policy Institute.

The Silicon Slopes tech hub is the main driver of this growth and, judging by its latest tech summit, it shows no signs of slowing down. If you’re looking to land a tech job in the Silicon Slopes area (or anywhere else in Utah), Empire Resume can help.

Resumes today are changing rapidly and Empire Resume knows all the ways to get your resume in front of a hiring manager. Empire Resume’s tailored resume writing service will optimize your resume for Applicant Tracking Systems (ATS) that companies use today.

Call Empire Resume at 801-690-4085 to get a started on creating a professional resume to help you get the technology job that you deserve.

How to Get a Job in IT