What is Veterans’ Preference? 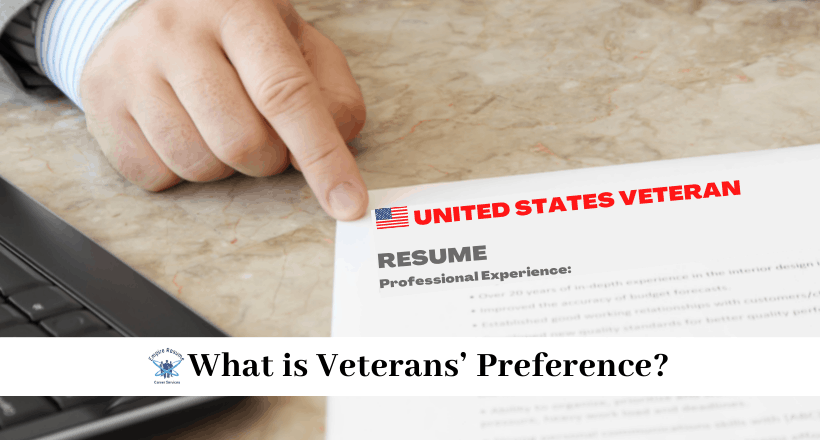 Veterans’ Preference is a federal law known as the Veterans’ Preference Act of 1944, codified in provisions of Title 5 of the U.S. Code. The Act gives special preference to eligible veterans during the hiring process for government jobs, including civilian military jobs.

Veterans’ Preference is an important option to consider after making the military to civilian transition as it gives employment merit to veterans based on a point system. The point system includes factors such as:

This employment assistance program contains several rules and requirements, which can be confusing. And knowing whether you’re eligible to use this veteran employment benefit is a challenge, as Veterans’ Preference does not apply to all veterans.

For veterans currently looking for employment or non-veterans looking to enter military service to gain leverage, it’s important to keep in mind that this employment benefit does not guarantee a job. But absolute preference, which we’ll discuss later, can provide more to vets.

If you want to know exactly what Veterans’ Preference is, the certified military-to-civilian resume writing professionals at Empire Resume created this brief guide that explains the purpose of Veterans’ Preference, why it is given, its eligibility requirements, how it works, and more.

The Purpose of Veterans’ Preference 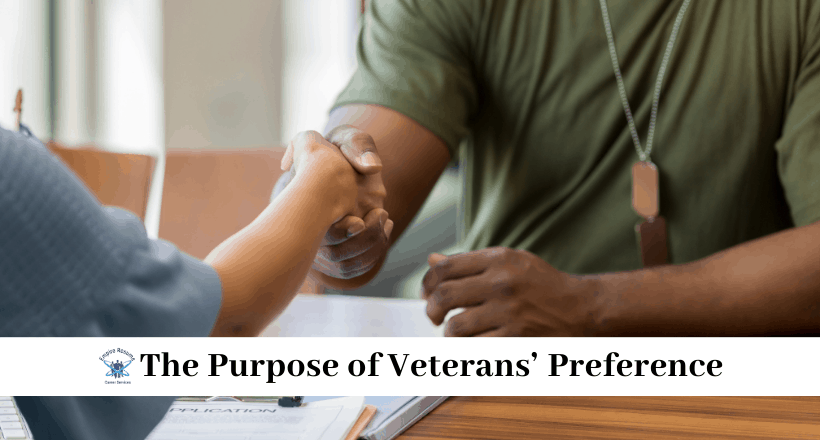 Veterans’ Preference was created to give disabled veterans, who served in the U.S. Armed Forces during certain time periods and military campaigns, preference over civilians in hiring for federal government jobs.

Today, one-third of new federal hires are Veterans. We can expect this number to increase over time, making Veterans’ Preference a continuing necessity in the federal hiring process.

Why Veterans’ Preference is Given

According to the Office of Personnel Management (OPM), since the time of the Civil War, Veterans have been given some degree of preference in appointments to Federal jobs.

Recognizing their sacrifice, Congress enacted laws to prevent Veterans being penalized for their time in military service when searching for jobs. Veterans’ Preference does the following:

After WWI, the program was expanded, allowing able-bodied, honorably discharged veterans to receive a hiring preference in most civilian federal jobs, as well as widows of deceased veterans and the wives of those severely disabled. 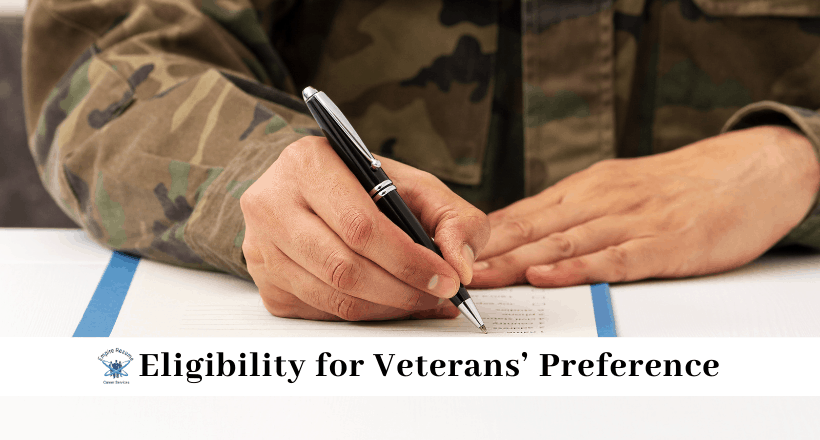 Earlier we said many veterans will not qualify for Veterans’ Preference. To help you better understand who can and can’t get preferential treatment during the hiring process, we’ve provided a list for you.

Military retirees at the officer rank of major, lieutenant commander, or higher are not eligible, unless they are disabled. Always remember, service-connected disability plays a major role in Veterans’ Preference.

Additionally, Guard and Reserve members on active duty for training purposes will not qualify.

When filling out applications, whether online or paper, Veterans should claim preference on their application or even their resume. Your military-to-civilian resume should work to your advantage to get you on the “Qualified” list when you apply for jobs.

If you need more assistance with creating a winning resume for veterans, check out Empire Resume’s military-to-civilian resume writing services.

Veterans’ Preference places veterans at the top of the applicant list when applying for federal government jobs.

According to the U.S. Department of Labor, there are two types of job classifications to watch while navigating the federal hiring process:

The laws help to ensure fair and open competition, recruitment from all segments of society, and selection based on the applicants’ competencies or knowledge, skills, and abilities.

These positions are not subject to the appointment, pay and classification rules of the competitive service.

Learn more about the federal hiring process at the VA website. 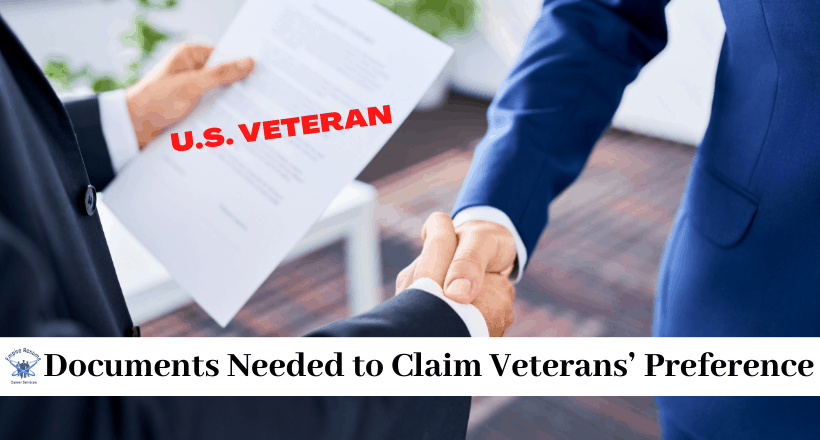 The DD-214 is issued to military members upon separation from active service. It contains information about the veteran’s dates of military service and separation.

The SF-15 is used by Federal agencies and OPM examining offices to adjudicate individuals’ claims for veterans’ preference.

USAJOBS states that a VA letter containing the following information may be sufficient instead of a SF-15:

If you are applying for federal employment through USAJOBS, the federal government’s official jobs site, these documents can easily be uploaded to the portal. 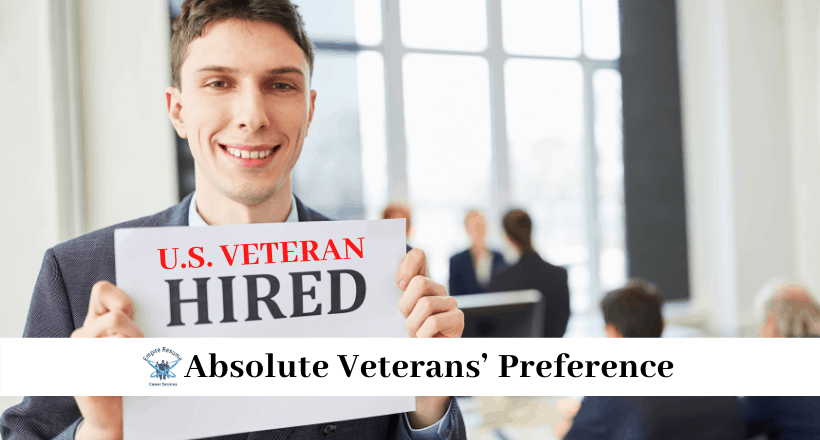 Remember our earlier mention of a term called absolute veterans’ preference? While all 50 states give preferential treatment to veterans in the hiring process, a few states give absolute preference.

What makes this type of preference unique and different than traditional Veteran’s Preference? We’re so glad you asked.

Absolute preference pushes veterans directly to the front of the hiring line even if other civilian candidates are more qualified.

This means that someone else could have a better skillset, have more training, or more education than you, and you’ll still be put on the top of the hiring list. This, in itself, is a sheer advantage veteran job finders shouldn’t ignore.

At the moment, research shows that only four U.S. states give absolute preference to vets:

These states use a civil service test or other form of testing to hire veterans with a passing score ahead of all non-veterans.

The other 46 states use a point system similar to the one used by the federal government.

Be sure to keep an eye on absolute preference in your state by checking official local, state, and federal websites to see if this type of preference is offered. Just because your state doesn’t offer it right now, doesn’t mean it won’t be approved in the future.

For your convenience, we’ve described the federal veteran preference point system below: 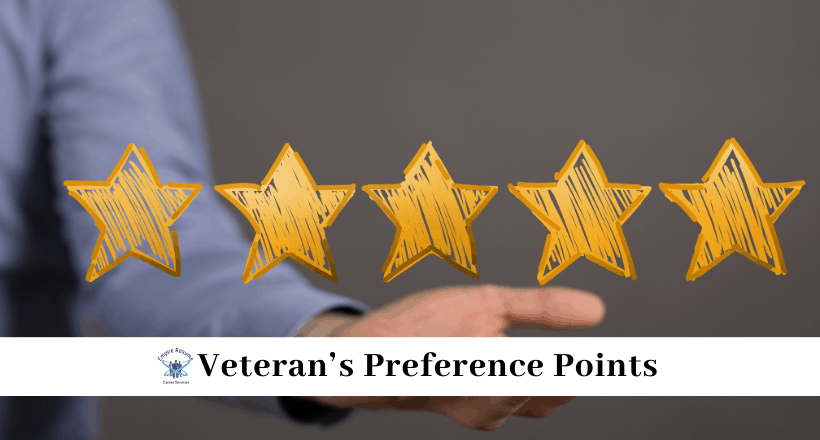 According to the Veterans’ Affairs website, the federal hiring process includes three types of preference:

0-Points Preference: This type of preference applies to you if you were served in the U.S. Armed Forces and was discharged honorably.

With 0-Points Preference, you do not get any extra points for the hiring process. You simply get preference for being a veteran. To claim this preference, simply submit your Form DD214 during your career search.

5-Points Preference: This type of preference applies to you if you served during the following:

To claim a 5-Point Preference, simply submit your Form DD214 to get an extra five points during the hiring process.

10-Points Preference: This type of preference applies to you if you served at any time and:

To claim a 10-Point Preference and get an extra ten points during the hiring process, you must submit several documents, including your Form DD-214, the Application for 10-Point Veterans’ Preference and a letter from the VA Regional Office stating your disability rating. Failure to submit the necessary documents during your job search and the hiring process will result in withdrawal of Veterans’ Preference.

Don’t delay your opportunity for gainful employment with the federal government. Submit the documentation requested to make your search easier and keep you ahead of the other candidates.

Getting hired by the Federal Government or any government agency takes time and patience. Good news for you is, this is not a task that you have to handle alone. There are professionals who have walked through this process and helped many of other veterans do the same.

While claiming Veterans’ Preference does not guarantee that you’ll get a call for an interview or selected for a job, it only enhances your changes. It’s one of the many benefits in your veteran tool kit. Be sure to put it to good use. Empire Resume can help. 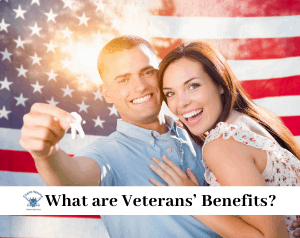 What are Veterans’ Benefits? 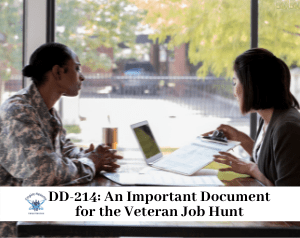 Benefits of the DD-214 in the Job Hunt