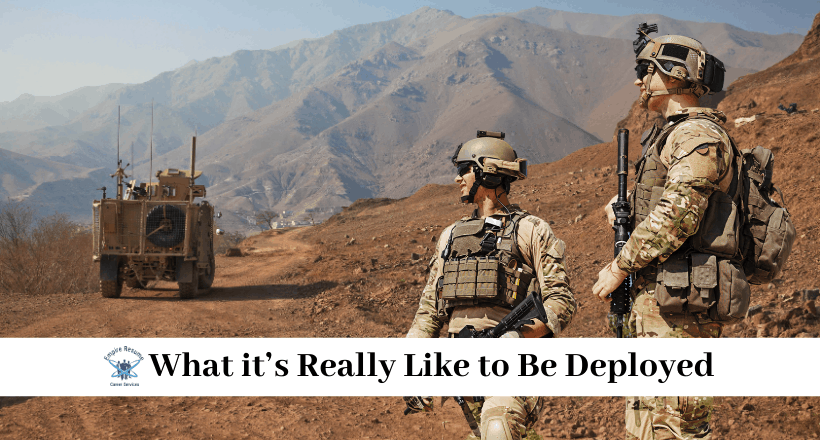 We’ve all seen the famously iconic photo of the sailor kissing a woman in New York’s Time Square. The photo known as “The Kiss” captured the celebratory moment when World War II came to an end.

While it’s normal to rejoice at the end of a war, seldomly does one consider what armed forces personnel experience when they are suddenly deployed or transported to a place where their military expertise is needed the most. Now that the holiday season is in full gear, we often think about our family members in the military who can’t be home for the holidays.

If you’ve ever wondered what it’s like to be deployed, stick around for Empire Resume’s deep dive into what deployment is really like while in the military.

What is a Deployment?

Deployment is known as the activity of moving military members and equipment from home base to a specific location.

Any military officer or enlisted member of the Army, Air Force, Navy, Marine Corps, and Coast Guard in any occupational specialty can deploy at any time.

In fact, the potential to deploy is what a military member signs up for when he or she takes the military oath. 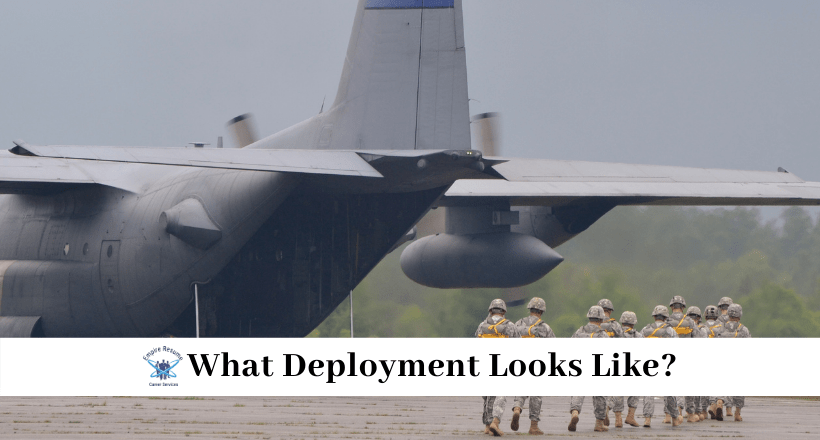 It’s important to keep in mind that deployment can occur overseas and stateside. The prime examples of military deployment help to put this into perspective:

For servicemembers and their families, deployment is a process that can transform an entire household and reshape family life in the military.

Spouses become accustomed to filling all marital roles and children spend many holidays without a mom or dad around. This is a reoccurring event that military families are used to.

Quite honestly, a deployment can be a negative situation or positive, depending on the people involved. Many expectations and emotions need to be adjusted and managed. Just ask any military family member and they will have their own perspective.

Believe it or not, deployment does not occur in one step.

Deployments always happen in several phases – pre-deployment, deployment, post-deployment, and reintegration. For more information on these phases and the active duty deployment life cycle, check out the overview of deployment by Military.com.

How Servicemembers Feel About Deployment

The book reports that deployments have positive and negative aspects, according to military members who participated in a focus group to provide detailed information on how deployments impact them. These focus group participants also had mixed feelings about whether deployment would affect their re-enlistment intentions.

Overall, the major stressors identified and reported in the participant focus groups include:

We were able to talk to a military veteran, who asked to remain anonymous, about his overseas deployment experiences in the Army.

He quickly mentioned how scary deployment can be each time, no matter how many times one deploys. Walking into unfamiliar territory with people you don’t know is enough to overwhelm anyone.

But on the bright side, he says, the fraternal aspects of the military like teamwork and community becomes even more important during deployment.

Another positive he found that many may agree with, is the fact that deployment allows people to appreciate the little things in life even more once they return home.

Aspects of daily life such as taking a shower, having a fast and clear internet connection are all things we often take for granted.

One great benefit that deployed servicemembers may get is an exclusion from income taxes! Military pay is tax-free when a servicemember is deployed in a combat zone, which is determined by the President based on where US Armed Forces are engaging or have engaged in combat.

According to the IRS, “If you are an eligible member who served in a combat zone, the IRS can exclude your income from taxation.”

There are many areas in the world that are designated as combat zones. Military.com published an extensive list of these areas, which are constantly changing based on conflicts.

Military Spouses Speak Out on Deployment

We’ve searched the internet to find out what military spouses are saying about what deployment really feels like.

First, is an opinion article located in USA Today entitled, A COVID Christmas: Military families are used to spending holidays apart. You can too. Active-duty Air Force spouse, Sarah Streyder shares her experiences spending the holidays alone as a military spouse.

When it comes to holiday traditions, she states, “The military community has never had anything ‘typical.’”

In addition, she talks about crying when loved ones deploy and how military families are exhausted.

The silver lining that is saving grace for Sarah and her friends is the, “Big picture,” she says. “We’re making small sacrifices now so that we can gather with our families again soon.”

In Military Spouse Magazine, military brat Katherine Gauthier chimes in on what it’s like to be deployed for Christmas. She states that friends and family can help fill the gap while one is deployed.

Have You Considered How Deployment Impacts Military Members and Their Families?

Hopefully this article gave you an “in their shoes” moment and provided great insight as to what every military family goes through during deployments.

The common denominator here is, yes, deployments are mentally and physically demanding. But with an optimistic outlook, you can always find the pot of gold at the end of the rainbow.

Have you taken the time to consider what it’s like to be deployed and away from your family for the holidays or any time of the year?

If you enjoyed this piece, you can always count on Empire Resume to write about hot topics relating to military members, military families and military veterans as they progress through their careers.

When you need help changing careers in any place throughout the United States, look no further than Empire Resume’s professional resume writing services. Call us now for a free resume review at 801-690-4085 or by emailing info@empireresume.com.