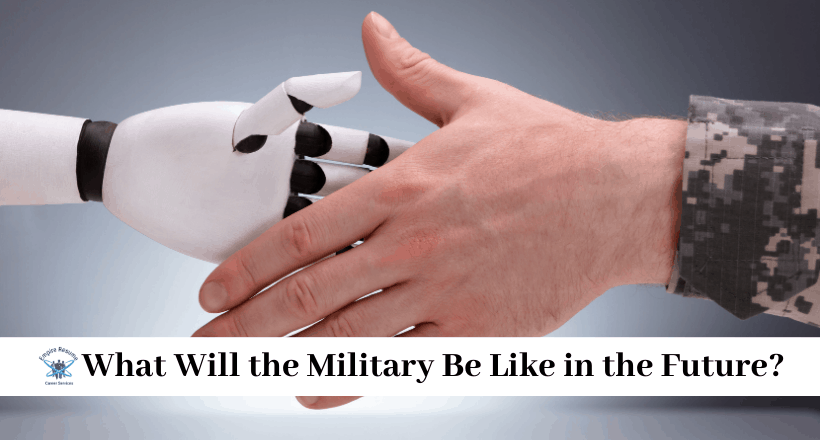 Robots. Self-flying planes. Futuristic uniforms. These are all hot topics when it comes to predicting the future of the military and modern warfare. In another article, The Automation and the Future of Jobs, we mentioned that automation and artificial intelligence is expected to replace human personnel in the workplace, and the military is no different.

Now, with the Coronavirus pandemic making an unexpected impact on the military and civilian life in 2020 and beyond, there’s one question on team Empire Resume’s mind — what will the military be like in the future? 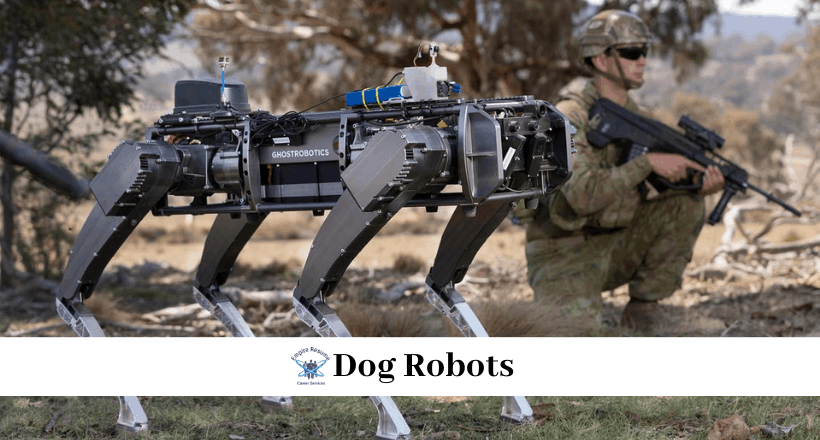 On September 9, 2020, CNN reported the U.S. Air Force is providing a glimpse into the future by introducing robot dogs into its joint military training exercises with all branches of the Armed Forces, including the Coast Guard.

“The electronic canines are just one link in what the US military calls the Advanced Battle Management System (ABMS),” said Brad Lendon of CNN.

The Robot Dogs were created by Ghost Robotics to enhance situational awareness for security forces missions. Learn more details about the Vision 60 at The War Zone by The Drive.

Will military uniforms of the future look like Master Chief from the video game, Halo? Or, what about the Marvel Comics character, Iron Man? Not quite. However, we can’t say the attempt to make high speed uniforms that replicate the suits of these characters didn’t exist.

According to Military.com, Army researchers responded to a request from the U.S. Special Operations Command for technologies to help develop a revolutionary Tactical Assault Light Operator Suit. The Tactical Assault Light Operator Suit, or TALOS, is an advanced infantry uniform that promises to provide superhuman strength with greater ballistic protection.

Although the suit was planned to be complete in 2018, the exoskeleton never came to fruition. The article goes on to suggest that five years and approximately $80 million spent on TALOS resulted in the knowledge necessary to create other exoskeletal systems throughout the U.S. military.

With this news, we can expect military uniforms to be technologically advanced. For more information on this suit and project, check out SOCOM’s Iron Man Suit Officially Dead by Military.com.

On another note, the U.S. Army is currently testing futuristic combat goggles that quickly detect temperature without contact due to COVID-19 and the impact on the military.

In April 2020, Breaking Defense indicated that soldiers were testing the prototypes. It was reported that 300 soldiers were processed in less than 30 minutes while using the goggles.

This technology opens the door for the military to expand into modern warfare by providing the following in a single, solitary headpiece, according to Breaking Defense:

See more about how the military will integrate these IVAS goggles into its strategy to prevent threats in the future at Military.com.

Currently, the Navy has new ships expected to take commission between now and 2027. Capabilities include being stealthy, deploying sea drones for ocean attacks, and automation. The most recent to complete trial just this August is the Littorial Combat Ship (LCS) 21.

This ship is a part of the, “LCS fleet of sister ships that are inherently capable to serve freedom of navigation, drug interdiction and humanitarian missions, and with additional capabilities onboarded, they can serve further focused missions,” says Joe Piedro with Lockheed Martin, the designer and builder of the ship.

The LCS 21 is slated to take commission in 2021. To learn more about the future Navy ship, see the Future USS Minneapolis St Paul on the Naval Sea Systems Command website.

More Predictions of the Future for the Military

Many questions arise as we predict the military’s future and trends that will evoke change throughout the Armed Forces. For instance, will artificial intelligence wipe out humans? It is quite possible that drones can replace the need for human pilots. However, pilots will be the ones operating those drones. There will always be a need for the human factor.

But just in case you’re still curious about whether the military is going where no man has gone before, take a look at the Cyborg Soldier 2050. It’s a paper written for the U.S. Army, according to Military.com, that discusses a group that studied the various technology that will enhance a soldier’s hearing, vision, muscular control, and enhancement of the brain for two-way data transfers.

Essentially, this type of technology integrates man and machine to create a Captain America type soldier if you will. Discover more by reading Military.com’s article titled, The Future US Military Super soldier May Be Closer Than We Think.

Finally, if you’re a reader who can’t get enough of the future for the military, get a copy of Robert A. Heinlen’s Starship Troopers or watch the movie. The book has earned its place on almost every single U.S. military reading list. Find out why at We Are The Mighty.

So, what do you think the military of the future will look like? Is it safe to say the future is upon us already? Let us know your thoughts in the comments below.