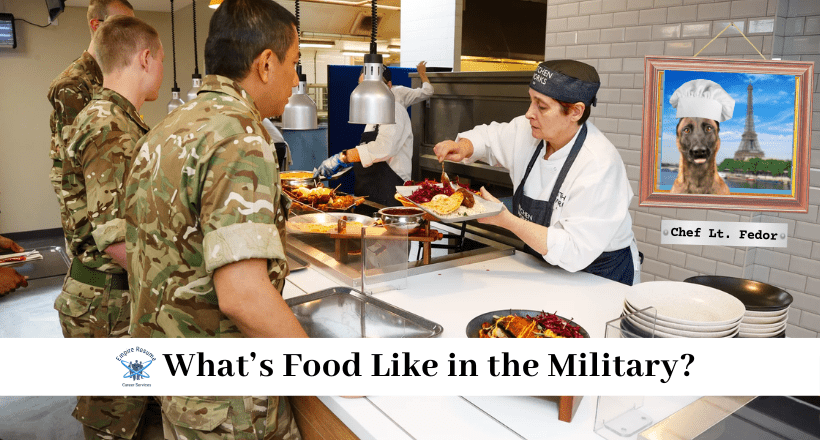 You may not think about many aspects of being in the U.S. military until you’re a member. For example, what’s grooming like? Are you required to get your hair cut short? What about other aspects of hygiene?

One of these somewhat quirky topics is food. And, believe it or not, the history of food, chow halls, and meals in the U.S. armed forces is longer, more interesting, and more influential in American culture than you may think.

In basic training, every recruit is served three meals per day, and the food isn’t much different from what you’d remember from a high school cafeteria. Chow hall meals in basic training aren’t a leisurely time to relax and chat. You only get about 15 minutes to scarf everything down, and you’re not even allowed sweets or sodas in some military branches.

After basic training, the food situation gets better. Today’s military chow halls for servicemembers include some delicious stuff, such as extensive salad bars and stations for full meals such as fried chicken, seafood, and pasta. Plus, you may even get access to a snack line with stuff like chili and French fries.

Empire Resume will dive into the topic of food in the military, including what you can expect as a servicemember, the unique culinary history of the U.S. military, and how military food has actually had an outsized impact on what civilians and the rest of the country find at the supermarket.

Not Many Options During Basic Training As we mentioned, food during basic military training isn’t that great. Many people typically lose weight during basic training because they’re on their feet all day and burning calories at a higher-than-normal rate.

And when it comes time to eat your three meals per day, you don’t get much time, and there aren’t many options. You usually have access to a salad bar, but the snack line is typically off-limits to recruits. And if you don’t like the choices in the chow hall, it’s tough luck. Either you eat it, or you go hungry.

It’s recommended that you eat as much as possible during basic training to add the calories you’ll need. Rice and extra bread are smart options and are usually available daily for lunch and dinner. The biggest concern is staying hydrated during the demanding physical aspects of training. You’ll be required to drink three glasses of fluid at every meal, whether it’s Gatorade, water, or juice.

For the first few weeks of training, meal time will be limited and a bit stressful. You can expect to be quizzed on military knowledge and stopped by Military Training Instructors. As a result, you’ll learn quickly not to waste time, eat fast, and refrain from conversations with other recruits. However, after the first couple of weeks, things tend to calm down, and you’ll have more time in the chow hall.

Menus are Getting Healthier

After completing basic training, the food in the U.S. military gets better. The military promises to feed all servicemembers, and you’ll get your meals for free in most cases. The military will feed you primarily by three methods: chow halls, basic allowances, and Meals, Ready to Eat (MREs).

Many chow halls offer four meals per day: breakfast, lunch, dinner, and sometimes a midnight meal. Some chow halls are even open 24 hours a day. There’s a heart-healthy menu if you’re health conscious, along with a salad bar.

For breakfast, military members have the option of anything from fruit cups to made-to-order omelets with side dishes. Take-out cartons are usually available in many chow halls; some dining facilities even have drive-through windows.

The military has been reducing the number of chow halls it operates recently because the size of the U.S. Armed Forces is declining. Chow hall menus are also becoming increasingly healthier, making some younger troops seek out nearby, inexpensive, fast food if available.

Officers and enlisted people who don’t live in the dormitories get a monetary food allowance. Basic Allowance for Subsistence is an allowance, not pay, so it’s not taxable. Officers get paid less BAS than enlisted personnel since their base salary is higher.

The allowance isn’t designed to benefit family members; it’s solely for meals for the servicemember. The Army does reimburse servicemembers for missed meals, but getting the money requires a paperwork-intensive process.

When enlisted servicemembers who receive a food allowance get deployed, they used to lose their allowance because they’d get free meals at the deployment location chow hall. But Congress passed a law in 1998 that required the military to continue to pay BAS to deployed troops after getting complaints from many servicemembers after the first Gulf War.

Another form of military food is Meals, Ready to Eat (MREs). These sealed foil envelopes with food can be heated or eaten cold, and they have replaced the old military C-rations and field rations. The packets contain an entrée, side dish, crackers and cheese spread, dessert items, cocoa powder, and a few other miscellaneous snacks. You get several choices for the entrée.

The Department of Defense surveys military members every couple of years to determine which MREs are popular and which aren’t. The unwanted menu items get discontinued, and new things get introduced all the time. You also don’t have to be a military member to try an MRE if you want to. They’re available in many camping stores and military surplus stores for purchase.

MREs are a bit of an ongoing inside joke among military members. Some early MRE entrees weren’t very delectable, leading to nicknames like “Meals Rejected by Everyone” and “Meals Rarely Edible.” In addition, MREs used to include frankfurters that came sealed in pouches of four, and troops sometimes referred to them as “the four fingers of death”! MRE quality has improved over the years, but the nicknames and the jokes from troops have stuck.

Not all MREs are bad, though. The rations are a shared experience in every military branch, from the Army to the Navy to the Air Force, and no matter your rank, you may get some tasty MREs while you serve. Former and current military members say some of the greatest MREs of all time were the chili mac, beef ravioli, beef stew, chili with beans, and shredded BBQ beef.

MREs that ranked as some of the all-time worst include the chicken a la king, veggie omelet, beef enchilada, veggie burger, and dehydrated beef and pork patties. None of those sound all that appetizing, right?

One fascinating aspect of military food is that the technology and techniques developed by the military to feed troops have often filtered into the civilian population. Anastacia Marc de Salcedo recently wrote a book called Combat-Ready Kitchen: How the U.S. Military Shapes the Way You Eat, and in it, she explains how military researchers have developed processed foods that have become a staple of many American civilians’ diets.

Salcedo’s book points out several types of food and food items that you may be surprised initially came from the military. One of those is energy bars, which resulted from a nearly century-long quest for an emergency military ration that was light, compact, and nutritious. The energy bar began as a meltless, pretty nasty chocolate bar called the D ration that was produced by Hershey in the 1940s. By the mid-60s, energy bars developed by the military were freeze-dried and served during space flights.

Another food item developed by the military is saran wrap, a staple of almost every American kitchen. Cellophane was the only food film available during World War II, but it allowed moisture in, and edibles got soggy. A classified research program at the Polytechnic Institute of Brooklyn sought to find a replacement. They developed saran wrap in collaboration with Dow Chemical, filing a patent for the invention just a few days before Hitler died. The first saran wrap appeared in grocery stores in the 1950s and quickly became a wildly popular item.

Food probably isn’t the first thing you think about when considering joining the U.S. Armed Forces. But rest assured, the military will ensure you’re well fed during your service, and you’ll typically eat for free.

The food isn’t great during basic training, but it improves afterward. And food, like anywhere, is a big topic among servicemembers. Many like to joke about the infamous MREs, giving them funny nicknames. If you search online, you can find tons of information about the best MREs of all time and the worst ones.

Many aspects of life are different in the military, and how you eat is just one of them. The military spends a lot of time and effort on nutritional studies and food science, and their inventions have even impacted American civilian food. However, one thing you can count on when you enlist in the military is that you won’t go hungry no matter how much you like or dislike being a servicemember.

Stay tuned to Empire Resume’s blog for more helpful articles about military life and transitioning to civilian employment, such as How to Use Your GI Bill Benefits, Top 10 Military Headhunters, and Presidents Who Served in the Military.