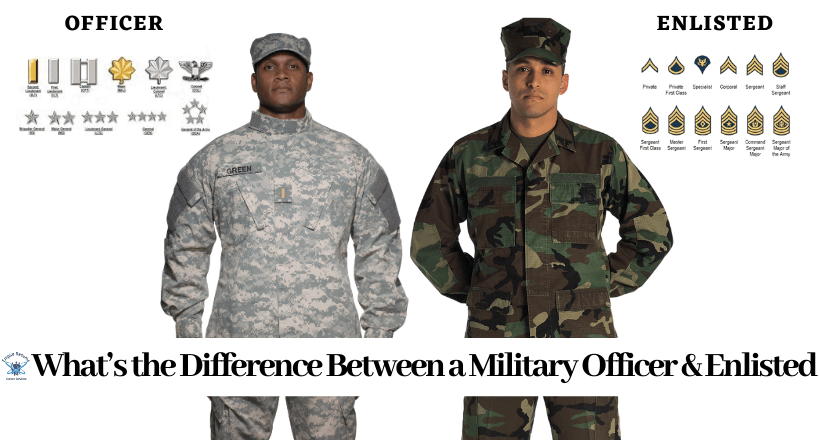 There are 18.8 million military veterans in the United States.

If you listen to their stories, you may hear, “I was enlisted,” or “I was a military officer.” Often, veterans are faced with a quick “Thank you for your service” because many people have no idea what those terms mean.

But what if you have no military experience? Understanding the roles of military personnel can be a struggle to figure out on your own.

The only issue is that you’ve first got to know the difference between them.

That’s why Empire Resume compiled a list of the differences between a military officer and enlisted.

The entire process of joining the military is different for enlisted and officers, especially commissioned officers.

Learn more about these three with Indeed’s article, Commissioned vs. Non-Commissioned Officer: What’s The Difference?

The joining process for enlisted members usually means speaking with a recruiter, taking a military entrance test, taking the oath of enlistment, and attending some sort of training like basic training or tech training to prepare for service.

Enlisting only requires a high school diploma or GED.

On the other hand, the process for commissioned officers means obtaining a college degree either through the ROTC program or by attending a U.S. service academy. Other options include receiving a four-year college degree first and attending officer training school to achieve a direct commission.

The major difference between an officer and enlisted is that commissioned officers are commissioned into service by the President of the United States.

This is noted in the last sentence of Article 2, Section 3 of the U.S. Constitution:

The President shall Commission all the Officers of the United States. 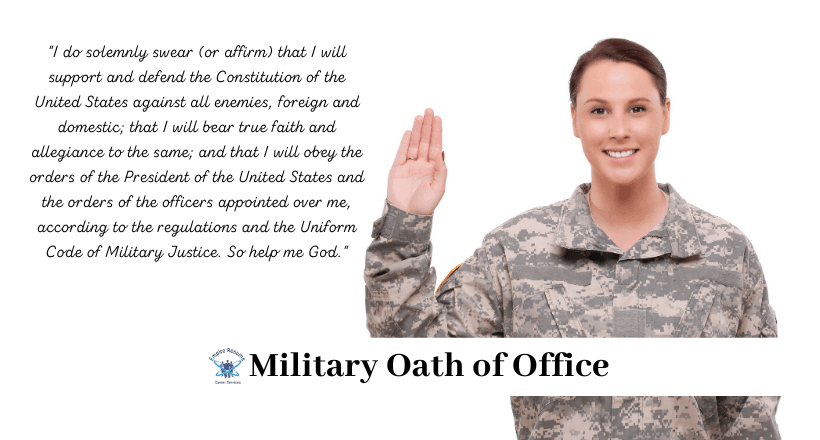 Have you ever been a witness to a swearing-in ceremony or watched some raise their right hand for military service and take the oath?

The oath taken by an enlisted candidate verses an officer candidate is different too. Because the roles come with different obligations, there’s an oath for both sides.

We can clearly see in the enlistment oath that enlisted members are obligated to obey the U.S. President, as well as managing military officers.

Now, let’s begin with the basics — military rank. Consider this the ultimate way to move up the career ladder in the military.

Military rank is an organizational system that shows authority and responsibility within the U.S. Armed Forces. Below are two ways of identifying rank:

Rank insignia can be found on the military cover (hat), shoulder, sleeve, or collar.

Officers are paid more than the enlisted level equivalent. For example, and O-4 (officer) will make more money than an E-4 (enlisted).

Rank and pay grade also determine the amount of benefits a service member is entitled to such as housing allowance and educational benefits.

According to the Bureau of Labor Statistics’ Occupational Outlook Handbook on Military Careers, enlisted members make up 82% of the Armed Forces and carry out military operations.

The remaining 18% are officers.

You may hear that officers give orders, provide leadership, management, and guidance. Others say enlisted personnel are the backbone of the military because they are the ones who execute or carry out the orders.

At the end of the day, enlisted and officers work closely together to accomplish goals and missions of the Army, Air Force, Navy, Marine Corps, and Coast Guard.

The BLS Handbook states some of the duties of an enlisted service member may include:

The work of officers typically includes:

Another difference you may not have noticed is how military members address each other daily. In the civilian world, you may address people as Mr., Ms. or Mrs., but the military operates in its own way.

For example, many service members are usually addressed by their rank combined with their last name. If you’re a colonel and your last name is Smith, you’ll be greeted as Colonel Smith.

But when answering a question or being in agreement, enlisted personnel address officers as sir or ma’am. Sir or ma’am is used at your discretion as a civilian. But in the military, it’s pretty much a requirement to show respect to one’s rank.

Finally, while enlisted military members are approaching commissioned officers, they must either render a hand salute to the officer or stand at attention in respect for the rank.

This military custom and courtesy varies depending on the location and circumstance. Keep in mind, enlisted ranks do not salute each other.

Wrapping Up the Difference Between Officers and Enlisted

We understand how confusing the terms military officer and enlisted can be.

While each role comes together to support and defend the freedoms that we have the privilege to walk in, knowing the difference can help you understand how each moving part of the military works.

The differences between officer and enlisted we listed are ones that stand out the most and are the easiest to discuss.

Now, you can spend less time focusing on those terms and more time connecting with your favorite military friends and family members on a deeper level.

Do you know of any other differences between a military officer and enlisted?