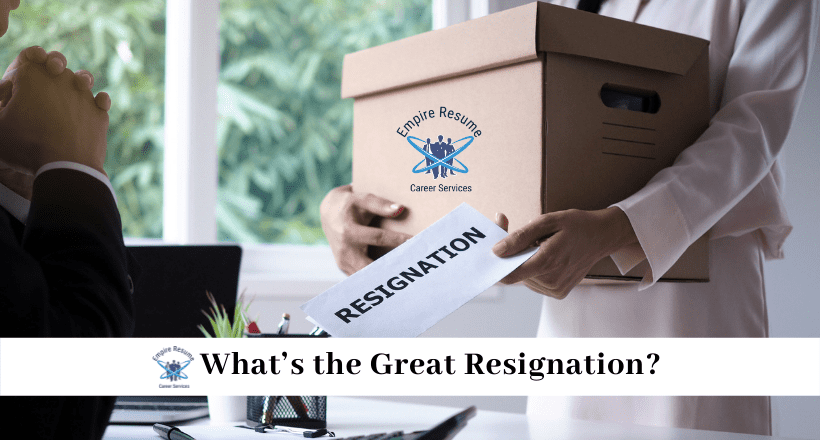 All across the U.S., workers are quitting in droves. The trend has become so pronounced that there’s a buzzword for it – “The Great Resignation.” But why is this happening? And how long will it continue?

Economic and labor experts have come up with several different theories for what’s driving the Great Resignation, including burnout from the pandemic, government policies that allowed so many workers to quit, and dissatisfaction with wages and benefits despite growing CEO pay and the cost of living.

Almost every industry has been hit with worker resignations, though the restaurant and retail industries have been hit the hardest. White-collar industries have also felt the impact, and 88% of executives said in a recent PwC survey that their company is experiencing higher turnover than usual.

Some observers have called the Great Resignation a general strike against low wages and poor working conditions. No matter how you look at it, it has significantly altered the job market and made it into a place where job candidates can thrive because they have so much leverage.

Empire Resume will look at the Great Resignation, explaining some causes behind it, what it means to the average jobseeker, and how long it may continue. 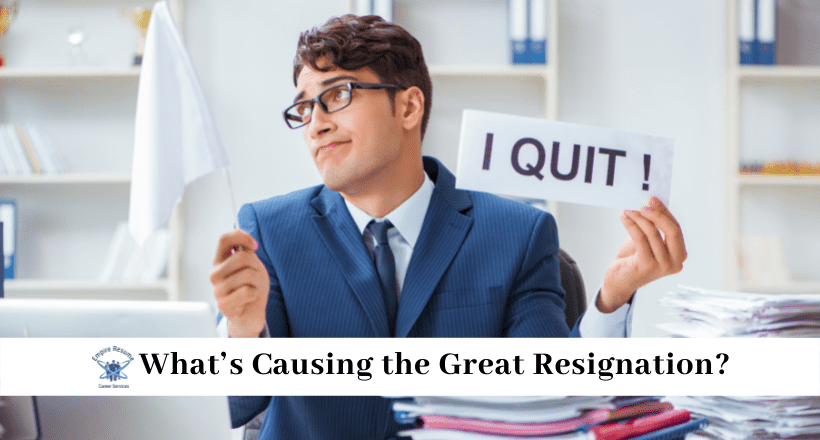 Why are so many Americans quitting their jobs? Numerous theories have been proposed, and it’s probably a combination of several factors. One of the primary reasons for so many employee resignations is burnout.

According to a recent survey by Limeade, about 40% of employees cited burnout as the top reason for quitting. Burnout was cited most by healthcare and food service/hospitality workers. Even before the pandemic, burnout among employees was becoming more common. The stress of the pandemic and the craziness of the past couple of years may have been the straw on the camel’s back that forced many employees to say, “I quit.”

Another reason for mass resignations could be the desire to work remotely. The pandemic caused many employers to switch to remote work to keep employees safe and healthy, and workers got used to the benefits. As companies try to get workers back into the office, employees are demanding remote work. They’re demanding it so much that many will quit their jobs and look for something else if remote work is not available at their current company.

Two additional factors are poor treatment and insufficient compensation, which is why some commentators are likening the Great Resignation to a nationwide strike. Bad companies with toxic work cultures may have doubled down on draconian policies during the pandemic, leaving workers fed up. And with inflation and a rising cost of living, other employees may have sought out jobs with better pay to help cover their rising expenses.

Lastly, the pandemic caused a shift in how many people thought about their relationship to work. Many workers began to think more seriously about work/life balance, parents wanted more time with their kids, and some Americans decided to start their own business or pursue different “dream” career opportunities. In this way, the Great Resignation has been seen as a “Great Realignment” in the average American’s relationship with work and career.

What’s the Effect on the Job Market?

U.S. job openings hit a record high over the summer, even though many people are still unemployed. Job openings were at 10.4 million in September, according to the Job Openings and Labor Turnover Survey, as employers across the nation struggle to find skilled and qualified workers. As these numbers indicate, it’s obviously a great time to be a job candidate.

For the first time in a long time, American workers are in the driving seat in the job market, and it’s paying off very well for many people. Job seekers have the leverage to demand higher pay, better benefits, and more flexible working conditions like remote work. This is true both for workers seeking new jobs and for workers negotiating raises and work conditions with current employers.

Third-quarter wage growth in 2021 was 3.3%, which is barely keeping pace with inflation that was 5.4% for this period. However, wage growth for job switchers was 6.6%, which shows why changing jobs is sometimes the best way to increase your salary, especially now.

The labor shortages have forced many companies to respond with better benefits and higher pay. For example, Amazon, Chipotle, and Bank of America have all recently announced raises to their minimum wages.

And even though many companies want workers back in the office, employee resistance to in-office policies has seemed to work so far. Big companies like Google and Facebook have postponed decisions to reopen their offices and are staying remote because of employee pressure.

The bottom line is workers have a ton of leverage right now, so use it wisely. Talk to your employer about changes you’re looking for, including benefits and salary, and you may be able to get them. And if you’re looking for a new job, make sure you have one lined up before you quit. Being employed while searching for a job right now will give you even more leverage in negotiations.

Workers Have More Leverage Than Ever

Things have been pretty crazy since the pandemic began in the spring of 2020. All sorts of changes are happening in our society, and they’re happening quickly. In the workplace, the Great Resignation is one of these vast, new trends that’s come from seemingly out of nowhere to change the rules.

Many people are debating the future of work right now, including how long so many people will work from home. The Great Resignation means it’s a great time to be a worker, as you have more leverage than ever to fight for better pay, benefits, and working conditions. But remember, it won’t last forever.

Some observers have said if the mass resignations continue, it could force some employers to begin automating more jobs, which could change the dynamic between job seekers and employers very quickly.

Empire Resume recommends being very methodical about your job search right now and taking advantage of the leverage you have in the job market. Make sure you evaluate all your options and line up a new job before quitting. Also, brush up on your negotiation skills so you can get the best salary and benefits package possible when landing a new gig.

Stay tuned to Empire Resume’s blog for more helpful career and employment insights, such as articles like How to Create a References Page, 7 Interview Tips to Land a Job, and 5 Benefits of Hiring Remote Workers.