Why Employed People are More Attractive to Recruiters 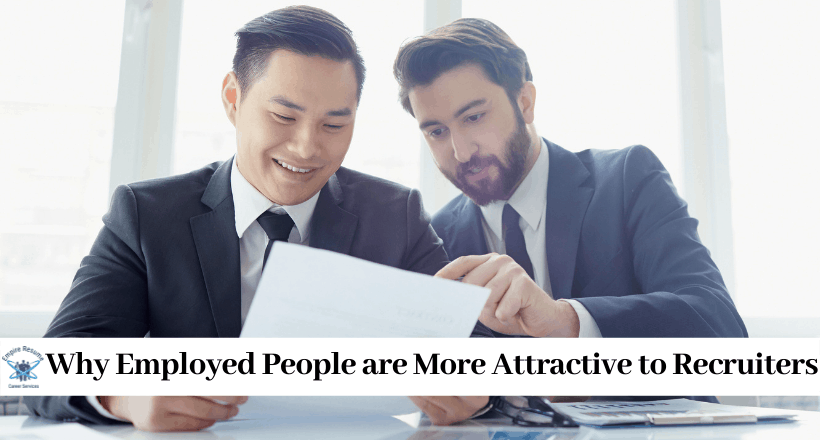 You’ve probably heard the old bit of conventional wisdom before: “It’s always easier to look for and get a job when you already have one.”

Unfortunately, this is probably true. Even in tough economic times, hiring managers and recruiters tend to like employed job candidates better than their unemployed counterparts.

Some statistics and surveys back this claim up, too. For example, the New York Fed Center for Microeconomic Data’s Job Search survey revealed that employed workers got job offers 23% more on average than unemployed workers.

Why is this the case? There are a variety of reasons employed workers are more attractive to recruiters. Employed workers may not have as many gaps on their resume, they’re probably not as overeager and desperate for work, and they likely exude more self-confidence in the interviewing process.

Empire Resume will delve into why it’s better to be employed while looking for a new job and give you a few tips on how to job search while employed.

Being unemployed while looking for a job creates the same problem as having too many gaps on your resume. This is one primary reason why employed workers are more attractive to recruiters than the unemployed.

Resume gaps are tricky and a significant disadvantage against you during a job search. The gaps can give hiring managers and recruiters the wrong impression, making them think your abilities and ambitions aren’t as good as you claim.

Worst of all, resume gaps could imply that you’re lazy or don’t care about your career. Obviously, this isn’t the impression you want to give.

Everyone faces tricky interview questions, and one of the toughest is, “Why are you looking for a new job?” If you’re employed, this question is much easier to answer, as you can say you’re looking for a new challenge.

But if you’re unemployed, answering why you left your last job is much more challenging. No matter what you say, the recruiter or hiring manager may read between the lines and assume you were fired or “dishonorably discharged.”

It’s not the best situation to be in! 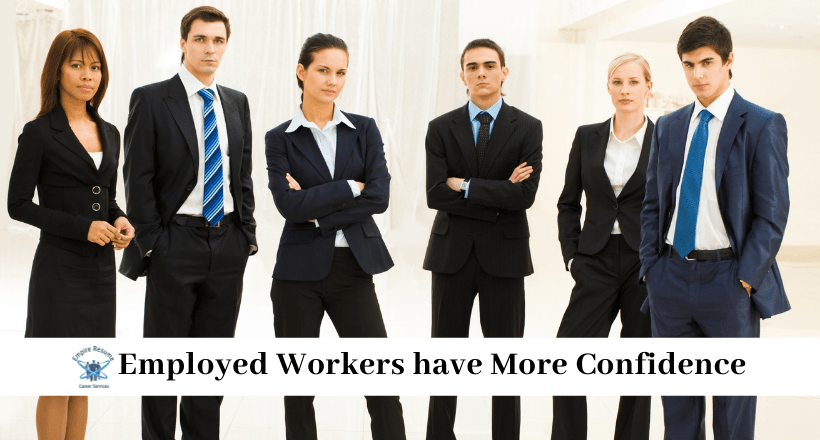 You’ll naturally exude more confidence in a job search if you’re employed. This may not even be a conscious act – it just sort of happens.

Part of this is probably because there’s not as much pressure. If you’re already employed, you likely won’t seem as eager and desperate to a recruiter. Plus, you’ll have more time to job search, you won’t be as worried about finances, and you’ll be much more discerning in your search.

Hiring managers look for enthusiastic candidates, but you may come off as desperate when you’re unemployed. Employed job candidates ask better questions, are more likely to negotiate because they have some leverage, and they’re less likely to stretch or exaggerate their abilities.

Networking is essential for job searching and, while you’re employed, your professional network is much more expansive.

Employed people are constantly networking because they’re working alongside co-workers and showing off their skills. While you’re employed, you’re also likely making new contacts every day, whether it’s working with co-workers from different departments or external clients outside of the company.

You’re at a distinct disadvantage while you’re unemployed, as far as networking goes. While unemployed, you’re working from a defensive position, trying to make new contacts and reaching out to stay active.

Employed people also may hear about new opportunities more often. For example, if a co-worker leaves for a new company, you can ask them about the new firm and if they’re hiring for your position.

Stigma Against the Unemployed

Last but not least, hiring managers and recruiters may have a bias (whether conscious or not) against unemployed job candidates.

Fair or not, there’s a stigma against the unemployed, especially those who have been without work for lengthy periods. Many recruiters assume workers won’t leave a job without another one lined up unless:

Even if it’s not true, hiring managers and recruiters may assume these things about unemployed job candidates. And all these reasons could become negatives in recruiters’ minds that work against you.

Bottom line: It’s best to search for a job while you’re already employed. No matter how frustrated or unhappy you are at your current job, use it as motivation to find something better. And think twice before quitting without something else lined up.

While this all may be true, what’s the best way to look for a new job while you’re already employed? There can be some pitfalls in this process, so it’s vital to ensure you do it the right way.

Keep your job search confidential while you’re employed and be very wary about telling anyone at your current company that you’re looking. If your boss or another senior manager finds out, they can view this as disloyalty, a betrayal, or possibly a reason to fire you.

When interviewing for a new position, tell the company it’s not okay for them to contact your current employer. As far as references go, put down old contacts like former bosses and co-workers, or potentially a close co-worker who recently left your current company.

Lastly, make sure you don’t slack off while looking for a new job. Job hunting takes time and energy, but you still want to give it 100% at your current position. And, of course, under no circumstances look for new jobs while you’re on the clock at your current job or using your current company’s computer.

Staying Motivated During the Job Hunt

The old cliché is true: It’s always easier to find a new job while you’re currently employed. But if you find yourself unemployed, don’t get too down.

The length of time it takes workers to find a new job varies from person to person. According to the U.S. Bureau of Labor Statistics, the length of unemployment for the average American worker is 22 weeks.

Because of the stigma of unemployment, many jobless people are highly motivated to find new work. Use that motivation to your advantage. Consider freelancing in your industry or take classes so that you’re learning new skills.

Also, stay active on LinkedIn and use the site to your advantage by taking their skills test and posting content that hiring managers and recruiters will see.

Bookmark Empire Resume’s blog and stay tuned for more insightful articles, such as What it’s Really Like to be a CEO, How to Turn your Volunteer Position into a Full-Time Job, and How to get an Interview in 30 Days.